Researchers believe gender stereotypes hold women back in the workplace. Katherine Coffman's research adds a new twist: They can even cause women to question their own abilities 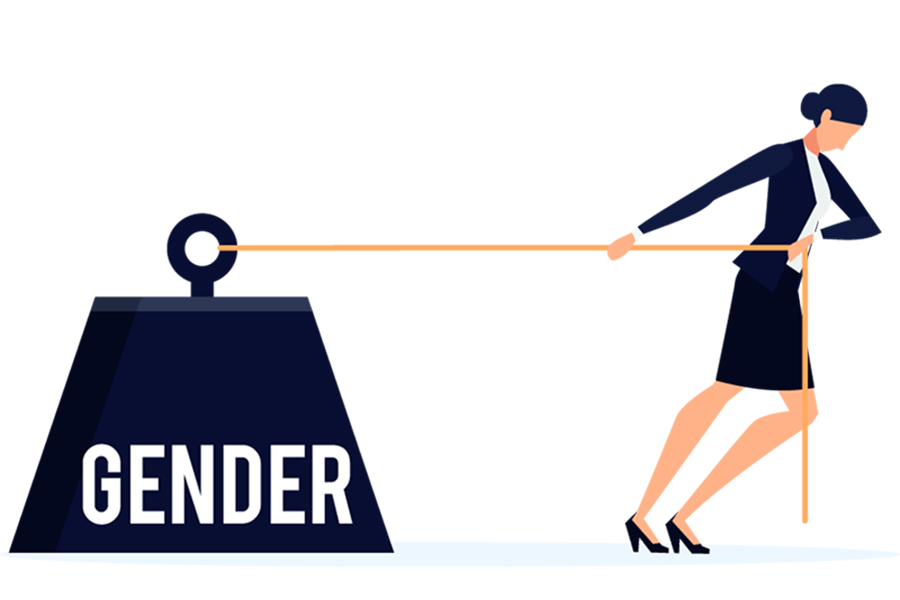 Image: Shutterstock
Women make up more than half of the labor force in the United States and earn almost 60 percent of advanced degrees, yet they bring home less pay and fill fewer seats in the C-suite than men, particularly in male-dominated professions like finance and technology.

This gender gap is due in part to “occupational sorting,” with men choosing careers that pay higher wages than women do, labor economists say. For example, women represent only 26 percent of US workers employed in computer and math jobs, according to the Department of Labor.

New research identifies one reason women might be shying away from certain professions: They lack confidence in their ability to compete in fields that men are stereotypically believed to perform more strongly in, such as science, math, and technology.

Women are also more reluctant to share their ideas in group discussions on these subjects. And even when they have talent—and are actually told they are high-achievers in these subjects—women are more likely than men to shrug off the praise and lowball their own abilities.

This weak self-confidence may hold some women back as they count themselves out of pursuing prestigious roles in professions they believe they won’t excel in, despite having the skills to succeed, says Harvard Business School Assistant Professor Katherine B. Coffman.

“Our beliefs about ourselves are important in shaping all kinds of important decisions, such as what colleges we apply to, which career paths we choose, and whether we are willing to contribute ideas in the workplace or try to compete for a promotion,” Coffman says. “If talented women in STEM aren’t confident, they might not even look at those fields in the first place. It’s all about how good we think we are, especially when we ask ourselves, ‘What does it make sense for me to pursue?’”

Coffman has recently co-written an article in the American Economic Review as well as two working papers, all aimed at studying men’s and women’s beliefs about their own abilities.

What she found, in essence, is that gender stereotypes distort our views of both ourselves and others—and that may be especially troubling for women, since buying into those stereotypes could be creating a bleak self-image that is setting them back professionally.

Here’s a snapshot of findings from all three research studies:

Women are less confident than men in certain subjects, like math
In a study for the journal article Beliefs about Gender (pdf), Coffman and her colleagues asked participants to answer multiple-choice trivia questions in several categories that women are perceived to have a better handle on, like the Kardashians, Disney movies, cooking, art and literature, and verbal skills. Then they were quizzed in categories considered favorable for men, such as business, math, videogames, cars, and sports.

Respondents were asked to estimate how many questions they answered correctly on tests, and to guess the performance of a random partner whose gender was revealed. Both men and women exaggerated the actual gender performance gaps on average, overstating the male advantage in male-typed domains as well as overstating the female advantage in female-typed questions. And in predicting their own abilities, women had much less confidence in their scores on the tests they believed men had an advantage in.

“Gender stereotypes determine people’s beliefs about themselves and others,” Coffman says. “If I take a woman who has the exact same ability in two different categories—verbal and math—just the fact that there’s an average male advantage in math shapes her belief that her own ability in math is lower.”

Women discount positive feedback about their abilities
In an experiment for Coffman’s working paper Stereotypes and Belief Updating, participants completed a timed test of cognitive ability in five areas: general science, arithmetic reasoning, math knowledge, mechanical comprehension, and assembling objects. They were asked to guess their total number of correct answers, as well as how their performance compared to others. A woman who actually had the same score as a man estimated her score to be 0.58 points lower, a statistically significant gap. Even more surprising, even after participants were provided with feedback about how they performed, this gender gap in how well they perceived they did continued.

In a second study participants were asked to guess how they performed on a test in a randomly assigned subject matter and to predict their own rank relative to others completing the same test. The researchers then provided participants with feedback about their performance. They found that both men and women discounted good news about their scores in subjects that their gender was perceived to have more trouble with.

Stereotypes play on our minds so strongly that it becomes tougher to convince people of their talent in fields where they believe their gender is weak, Coffman says.

“A policy prescription to correct a confidence gap in women might be: Let’s find talented women and tell them, ‘Hey, you’re good at math. You got a really good score on this math test,'" she says. “But our results suggest that this feedback is less effective in closing the gender gap than we might hope. It’s harder than we thought to convince women in male-typed fields that they’ve performed well in these fields.”

It’s unclear whether women would feel better about their abilities if they received repeated rounds of positive feedback, rather than one piece of good news. “I’d be interested to find out if the gender bias gets smaller over time, once a woman has heard that she’s good at math over and over again,” Coffman says. “You might have to encourage women a few times if you want to close these gaps.”

It's important to note, Coffman says, that these studies also show that men have less confidence than women in their ability to shine in fields dominated by women. “It’s not that women are simply less confident; what we find consistently is that individuals are less confident in fields that are more stereotypically outside of their gender’s domain,” Coffman says.

Women hold back on expressing ideas on ‘male topics’
In a third paper, Gender Stereotypes in Deliberation and Team Decisions, Coffman and colleagues studied how teams discuss, decide on, and reward ideas in a group.

The research team compared the behavior of two groups that had free-form discussions in response to questions that varied in the amount of “maleness” of the topic. In one group, the gender of each participant was known, and in the other group, the gender of speakers was not identifiable. They found that men and women had the same ability to answer the questions, yet once again, gender stereotypes warped people’s responses.

As the “maleness” of the question increased, women were significantly less likely than men to self-promote their ideas within the group when their gender was known, particularly in cases where only one woman was talking with a bunch of men. But in the groups where gender was unknown, no gender differences were found in terms of how much women and men talked up their ideas or were recognized by others for their input.

The researchers even found that stereotypes seemed to play a role in the way outside evaluators rated the contributions of each group member after reading transcripts of the conversations. Without knowing the gender of speakers, these evaluators were significantly more likely to guess that participants who came across in the transcripts as “warm,” or friendly, were female and that a negative or critical participant was male—even though researchers found no actual differences in how men and women in the group communicated. Male raters also were significantly less likely to believe that speakers who were judged as “competent” were female. In addition, warmer participants, particularly warmer women, were less likely to be rewarded for their input in the discussions.

Speak up for success
To achieve professional success, people must voice opinions and advocate for their ideas while working in decision-making teams, so it’s a problem if women are staying quiet when it comes to male-typed subjects—and if their ideas are appreciated less when they do express them, Coffman says.

“Our work suggests a need for structuring group decision-making in a way that assures the most talented members both volunteer and are recognized for their contributions, despite gender stereotypes,” the paper says.

It’s also important for managers to be aware of how confidence gaps may impact the workplace, particularly in professions long dominated by men, and to realize that women may need extra encouragement to express their ideas or to throw their hat in the ring for a promotion, Coffman says.

“I would encourage business leaders to think about how [workers’ confidence levels] impact the processes in their organizations,” Coffman says. “I would say providing extra feedback is a good start. If you as an employer see talent somewhere, reaching out to make sure the person is encouraged, recognized, and rewarded—not just once, but repeatedly—could be a helpful thing to do.”

With this new data on gender stereotyping, Coffman and her colleagues hope their work will help inform future research to piece together answers to some puzzling questions, like why men and women alike believe that men will perform better than women in some domains and what interventions can be considered to close this gender gap in self-confidence.

“Stereotypes are pervasive, widely-held views that shape beliefs about our own and others’ abilities, likely from a very young age,” Coffman says. “Until we can change these stereotypes, it’s essential to think about how we can better inoculate individuals from biases induced by stereotypes, helping people to pursue fulfilling careers in the areas where their passions and talents lie.”

Tweets by @forbesindia
Abha Narain Lambah: Etching stories in stone
I see no practical use for cryptocurrency: Paul R Brody