Are We Thinking Too Little, or Too Much?

If you've done something the same way for 10 years, it might be time to reconsider

The most captivating item in Michael Norton's office is a Star Wars The Force Trainer, a toy that allows would-be Jedi warriors to levitate a Ping-Pong ball within a tube using only the power of focused thinking. Norton, a marketing professor at Harvard Business School, plans to study whether inducing people into believing they can expertly control the ball will affect the way they perceive themselves as business influencers.

In fact, Norton spends most of his time thinking about thinking. So it's somewhat ironic that his latest line of research explores the idea of thinking too much. 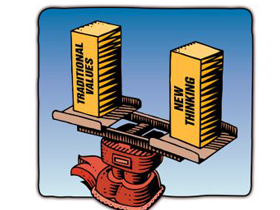 "Academics traditionally have taken two different approaches to decision-making," says Norton, who teaches in the Marketing Unit. "One view is that people often make decisions too hastily; they use shortcuts and heuristics, and therefore they're susceptible to biases and mistakes. The implication is that if maybe they thought more, they'd do better.

"And then there's this whole stream of research about ways in which you should think more carefully in more logical ways—creating decision trees that map out 'if you want to do this, then you should do this and not that,' making lists of the pros and cons and making a decision based on which list is longer, and so on."

"We all know that when we make lists, we often end up crumpling them and throwing them away because they're not really helping us make decisions," Norton says. "Bill Clinton was famous for becoming so involved with the intricacies of each policy that no decisions were made. Having a leader who considers every detail sounds great in theory, but it can be suboptimal for moving forward with a decision. There's a paralysis that can come with thinking too much."

Norton explores this idea in From Thinking Too Little to Thinking Too Much: A Continuum of Decision Making, an article he co-wrote with Duke University's Dan Ariely for Wiley Interdisciplinary Reviews: Cognitive Science.

"We set out not to tell people whether they're thinking the right way, but just to get them thinking, 'I'm supposed to be making a decision right now—am I thinking too little about this, or am I thinking too much?' " Norton says. "Both of those could lead to mistakes."

For example, in choosing laptop computers for a sales team, an IT executive might get caught up in comparing the graphics capabilities and audio quality of various options, when in fact the only factors of importance to users are the size, weight, and security features. Worse yet, even if they narrow down the list of attributes under consideration, executives can still be stymied if they try to consider every single laptop on the market. (In the article, Norton and Ariely cite a study by social psychologists Sheena Iyengar and Mark Lepper, who showed that grocery store shoppers who were offered free samples of 24 jam flavors were less likely to buy any jam at all than those shoppers who sampled only 6 flavors; considering too many options made it too hard to choose one.)

The Underthinker
The problem is that time-crunched managers often swing too far to the other end of the decision-making thinking spectrum—that is, they don't think at all.

"Very often managers find that there's not enough time to think through every single scenario or customer segment, which can take months," Norton says. "But too often the correction to 'We don't have time to do that' is an over-correction to one hundred percent 'We should go with our gut.' "

While all good managers should be able to make snap decisions in high-pressure situations, they may miss out on good opportunities—and fall into ruts—when they make quick decisions strictly out of habit. Too often, "We always do it that way" is the main reason for a decision.

"So they just decide to use that criterion forever because it's worked out in the past," Norton explains. "But they don't think about what if they had hired people who don't make eye contact. Maybe they would have been better than the people who do. And so that's the idea we want people to consider. Sometimes when you make habitual decisions, things work out fine. But that doesn't mean they're the best decisions. And if you've done something the same way for 10 years, it might be time to reconsider—to think a little more."
Stale Popcorn
More detrimentally, people may make downright bad decisions based on force of habit. In the article, Norton and Ariely describe a study in which several participants watched a movie while eating popcorn. Some received fresh popcorn, while others were given week-old, stale popcorn. The researchers found that those participants who always ate popcorn at the movies were just as likely to gobble down the stale popcorn as they were the fresh popcorn, strictly out of habit.

Lately, Norton has been studying the brain chemistry of decision makers, using functional magnetic resonance imaging (FMRI) in order to determine the neural signatures of decisions based on habits and those based on thoughtful analysis. He gives the example of choosing a favorite hangout because of the quality of the coffee and the ambience at a particular coffeehouse, as opposed to stumbling into a café on a very cold day when any hot drink would seem delicious—yet coming to believe in both cases that the establishment truly offers the best coffee in the whole world. "Ask yourself: Do I like this coffee because I really like this coffee, or do I like it because it was cold out?" Norton says.

Still, there's a long way to go before science offers a clear-cut method for thinking through decisions perfectly.

"We are hopeful that people will continue to conduct research in this area," Norton says. "What we know now is that people sometimes think too much, and sometimes they think too little. But we still don't know the right amount to think for any given decision, which is a fascinating decision yet to be solved."

Tweets by @forbes_india
Setting The Rules Of The Game: Corporate Governance And The Banking Sector
Trained To Be Tough