The quest for better layoffs

Professor Sandra Sucher wants to change the way business thinks about workforce reductions. "We want people to learn about the forces they unleash in the firm when they institute layoffs." 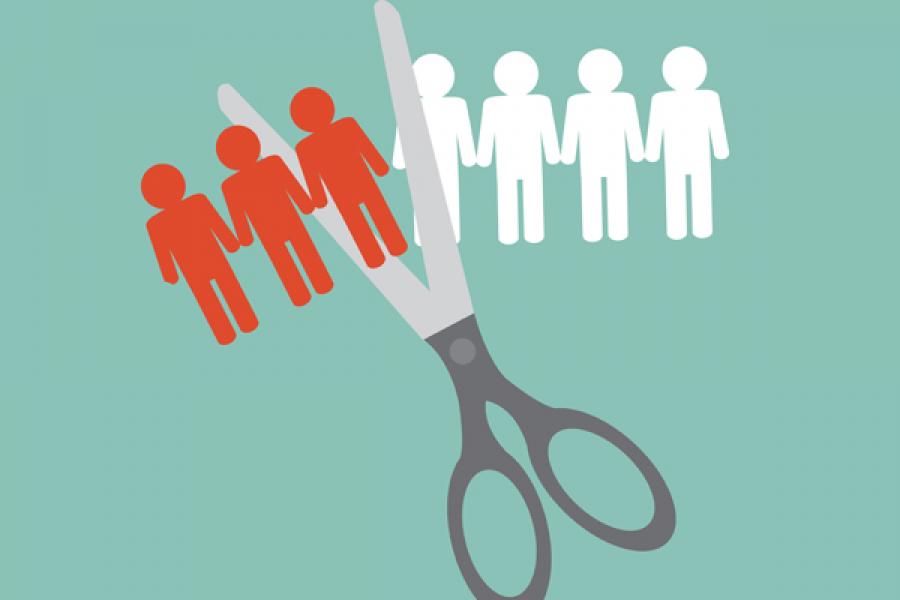 A few years ago, Sandra J. Sucher received worried emails from two MBA students in her first-year Leadership and Corporate Accountability (LCA) class at Harvard Business School. Elana Green (now Elana Silver) and David Rosales (both HBS MBA 2010) had been troubled by a class discussion about a company ravaged by a massive fire.

"They were very upset," says Sucher, the MBA Class of 1966 Professor of Management Practice and Joseph L. Rice, III Faculty Fellow at HBS. "What upset them was how cavalier they thought their classmates were, regarding the lives of the employees. They were convinced that their classmates had no idea what it would be like to be in a small town in New England, and to no longer have a source of employment."

Those emails have led to a multiyear study on the impact of layoffs. The project began with video case studies of laid-off workers, as well as a couple of technical notes for students—one focusing on best practices for managers as they consider workforce reductions; the other on the overall effects of layoffs. Case studies on individual companies' best practices in layoffs, downsizing, and workforce flexibility have followed, including a new case about how Honeywell weathered the Great Recession. The next step of the research will involve interviewing managers who have conducted layoffs—or who have found alternatives to them. Sucher is also working on a prescriptive book for managers with HBS Research Associate Susan Winterberg.

"This isn't just an academic interest for us," Sucher says. "We want to change how people think about this topic. We know there are sound and legitimate reasons why companies turn to layoffs—to respond to strategic shifts, add new skills, and pursue market changes. And leaders need ways to respond to business cycle changes. We want people to learn about the forces they unleash in the firm when they institute layoffs. We want to change the way layoffs are done."

The case of the Malden Mills mensch
The case study that prompted the layoffs project, Malden Mills, describes how a leader handled a disastrous event:

Two weeks before Christmas 1995, a fire destroyed three factory buildings at a textile company, one of the largest employers in the already economically depressed town of Lawrence, Massachusetts. Nobody died, but some 3,100 employees were displaced. Company president Aaron Feuerstein immediately announced plans to rebuild the company—and to keep all the displaced employees on the payroll in the meantime. The media hailed him as a mensch. But in making sure the new construction would meet the highest quality and liability standards, Feuerstein ended up spending more money than he had. And the company went bankrupt.

As with many HBS classes, Sucher's students shared differing opinions. "Two- thirds of them thought the guy was an idiot, that he should have just sent the jobs to China, where he was going to build a factory anyway, or [to] Mexico, where the costs would be much less," Sucher recalls. "The other third admired the guy for understanding the gravity of being a major employer with deep roots in the community."

But Green and Rosales thought the conversation lacked a key element: a consideration of how layoffs might have devastated the factory employees at Malden Mills. They saw it as a lack of empathy.

"They didn't seem to understand the impact that layoffs could have on families who didn't have a lot of resources at their disposal," says Elana Silver, now a talent development consultant at State Street, a Boston-based financial services company. "For most of my classmates, and for myself, getting laid off would be a temporary hardship. We wouldn't face the domino effect that many people face when they don't have savings accounts or other resources that my classmates and I had."

Emotional costs and worst practices
And so the students teamed up with the professor on a research project that would look into the effect of layoffs on companies, on communities, and, most of all, on employees. "The initial drive was to build empathy around the decisions that are so core on a human level," Sucher says. "They wanted people to learn about that."

Green and Rosales interviewed several people who had been laid off from a job—or several jobs. They then introduced the best candidates to Dave Habeeb and Ruth Page, of HBS's Educational Technology Services, who went on location to film interviews with the laid-off employees and their families. The resultant videos have been taught in the required LCA course since 2011. And Sucher believes they have served their purpose of helping students understand both the financial and the emotional toll of layoffs on workers.

In one video, Kelly White, a print technician, talks about the day she and her job were replaced by a piece of $18,000 equipment. "One of the very first thoughts that I do remember was, I am not needed," she says. "When I realized that automation had done away with my job 15 years sooner than I thought it ever possibly could, I realized that it's not that I'm not any good, it's that my skills aren't."

In another, Barbara Mathieson recalls getting laid off from a job in print production. The news surprised her because she had performed a singular role, vital to operations. Three days later, she received a call from an HR manager. It seemed that the company had laid Mathieson off without anyone in management actually knowing what her job had been. "I thought that was kind of weird," she says. "How do you lay someone off before you know what they do?"

The HR manager explained that the production process apparently didn't work without her, which Mathieson had known all along. The manager then asked the freshly laid-off worker to come back to the office—and teach her former job to someone else.

"Imagine receiving a call on Monday saying, 'You know, we don't know how to say this, but when we laid you off, we really didn't understand what you did…but now that we understand what you did, we'd like to pay you to come back and teach someone who's still employed how to do what you did, because what you did was actually really important for the company," Sucher says. "If I had to rank-order bad situations handled poorly, that situation would rank right up there."

Mathieson's story is one of many that have evoked dropped jaws among Sucher's students.

"When we show the videos in class, it's in an atmosphere of complete and utter silence," she says. "People are just taking in these stories. And something happens to them. One student had worked as a financial analyst before coming to HBS , and he said, 'I can't tell you how many layoffs I have recommended in the course of my short career. ' He said, 'I feel terrible now.' Granted, the same student was quoted later that day in a Strategy class, recommending layoffs. So I don't know how long lasting any of this learning is. But it certainly can give students a chance to put themselves in the shoes of people who had this happen to them."

The research team also interviewed high-level executives who have been laid off during their careers. "We wanted students to hear stories from people who were more like them, too, whose careers were similar to the careers the students were pursuing," Sucher says.

So the video series includes people like Hemant Luthra, now a top executive at Mahindra CIE Automotive in Mumbai, who is a 1994 graduate of the Advanced Management Program at HBS. In the video Luthra talks about losing a marketing position at IBM early in his career, due to a disagreement between the company and the Indian government. "IBM left the country in a huff," he says. "And there were those of us who had thought we were stars, who were suddenly looking for jobs."

Luthra rebounded into other jobs, holding C-level positions at several multinationals. In 2001, 35 years after losing the IBM job, he took a gig as CEO of the broadband division at Enron India. Enron collapsed later that year, and along with his job, Luthra lost much of his retirement savings. "There was this macho message that if you really want to be part of this family, you must put all of your savings into our 401(k)," Luthra says, visibly angry. "They went bust and took 25 years of [my] savings with them."

Seeking managers
In the latest stage of the layoff research, Sucher's team is looking to interview people who have conducted layoffs—or who figured out an alternative.

"We'll be focusing on individual experiences of the layoff from a managerial point of view," she says. "Did they bring people together to break the news, or did they do the layoffs one by one? What rationale did they provide to the employees? What kinds of benefits did they offer them? What kind of reactions did people have, and how did the managers handle those reactions? What happened inside the company after the layoff? Were there any surprises or hidden costs? How can the layoff process be conducted better in the future?"

To that end, Sucher has posted a listing on the HBS Working Knowledge Research Exchange, inviting managers to get in touch with her directly to share their tales from the field. Former newspaper editor and publisher Matt DeRienzo was among the first to respond.

"I had to eliminate more than 30 positions in 2014 and eventually volunteered to be laid off myself, so I've thought a lot about this topic and am interested in what the research will show," says DeRienzo. "Increasingly I feel like the way [a layoff] is handled can make a big difference for the people affected, for the organization left behind, and even for the profession itself."