For philanthropy, age is just a number

Teenagers crowdfunding for social causes or innovations are taking people closer to everyday philanthropy, one digital campaign at a time 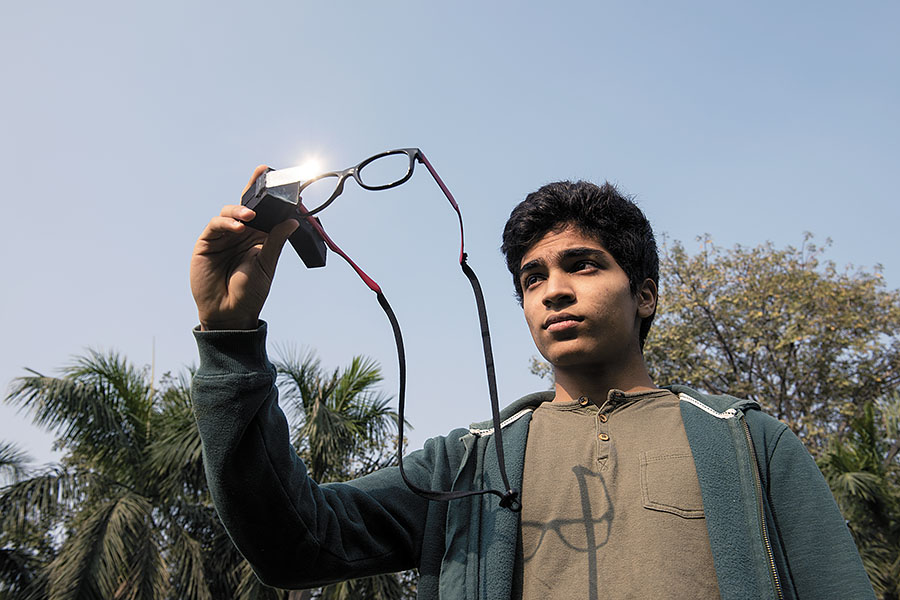 Madhav Lavakare, 17, raised ₹2.57 lakh on a crowdfunding site to upgrade his innovation, Transcribe, that converts speech to text
Image: Amit Verma
Madhav Lavakare, a 17-year-old from Delhi, hopes that his innovation will offer the Indian market what Google Glass could not: Mass affordability and social use cases. The student of Sanskriti School started experimenting with wearable technology after his friend, who was hearing impaired, dropped out of school because day-to-day communication with other students was becoming a problem. Lavakare’s innovation, called Transcribe, is a smart glass that converts speech-to-text so that the deaf can read what they cannot hear.

The hardware is based on a low-cost microchip that is connected to bluetooth on the user’s smartphone and the screen of the spectacles. A custom Android application utilises Google’s API (application programming interface) to convert speech from 132 languages to text. The converted data is sent via bluetooth to the glasses, where it is displayed in the user’s field of vision. The device can be attached to any glass frame, empty or with lenses of a specific power. 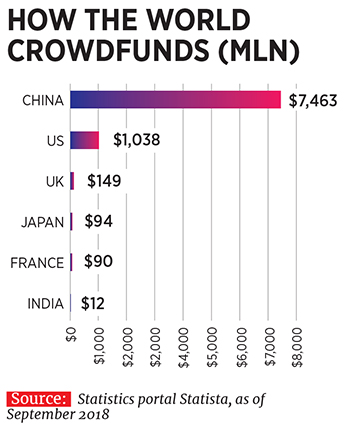 After Transcribe received the Dr APJ Abdul Kalam Ignite Award by the National Innovation Foundation (an autonomous body of the department of science and technology, government of India) earlier this year, Lavakare set his sights on the next goal.

He wants to experiment with new designs, build prototypes with better-quality electronic parts and manufacture more units so that the device reaches the right beneficiaries. Lavakare’s project, therefore, has gone live on a crowdfunding site, where he has raised ₹2.57 lakh of his ₹3 lakh target.

“The device restricts itself to people who are literate, but communication can also be symbols or images. The current prototype is just a base for multiple possibilities that will make communication more accessible to the hearing impaired,” says Lavakare, who will soon start more crowdfunding campaigns on international websites to reach out to people across the world.

While Transcribe will not be sold to make profit, Lavakare says there will be a marginal cost (approximately ₹2,500) to plough back some revenue for research and development.

As the National Innovation Foundation patents Transcribe on his behalf, Lavakare’s aim is to build a product good enough for the government to consider for mass distribution in schools, colleges and other public centres. “Right now, I am too young to approach investors. People contributing via crowdfunding are helping me scale up.”

According to statistics portal Statista, the crowdfunding industry in India registered a transaction value of $12 million from about 42,000 campaigns (as on September 2018). Teenagers across the country are using their access to technology and social media to leverage this momentum and raise funds for various causes or innovations.

With platforms like Milaap, Ketto, BitGiving and FuelADream working on donation-based crowdfunding, teens are learning how to create successful digital projects using videos, graphs and text, and are encouraging people to practice everyday philanthropy. While pitches for social innovations are backed with field interviews and surveys, teens raising money for a charitable cause often meet their beneficiaries to track progress and personally keep donors informed on a long-term basis.

Antara Ramkumar, a class 11 student at Sishya School in Chennai, is in touch with the 200-odd people from across the globe who helped her raise ₹24 lakh for a cause led by the Rotary Club of Madras. Her friends and she will visit the Gummidipoondi town (located about two hours from Chennai), where the crowdfunded money is being used to meet the annual shelter, food, education and health care requirements of about 105 children who are either orphans or belong to economically challenged homes in the nearby villages. 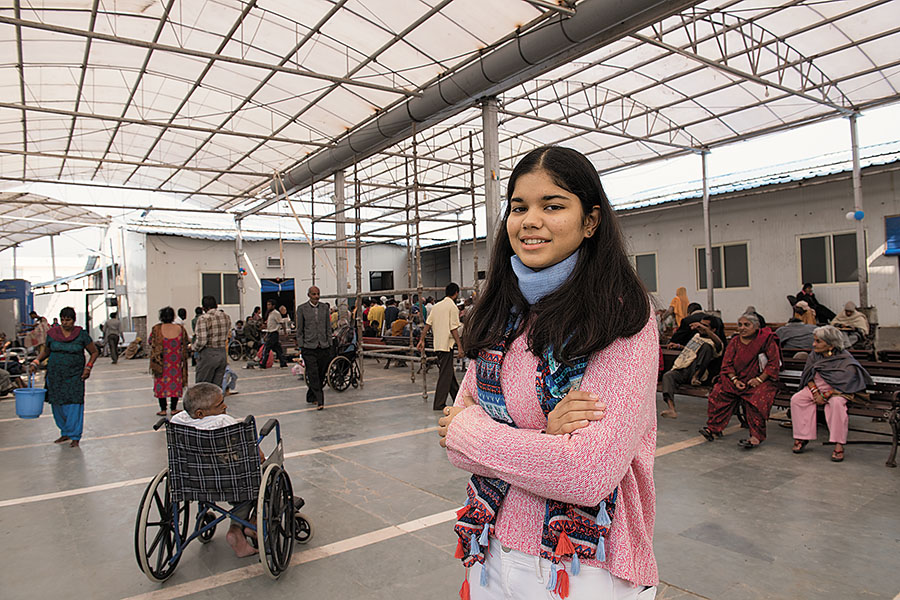 Tavishi Singh, 15, collected ₹1.78 lakh to build a rainwater harvesting system for a facility housing destitute and mentally-challenged people
Image: Amit Verma
“We will meet beneficiaries to understand how the money has impacted their lives,” she tells Forbes India. The 16-year-old explains that she has been raising money for causes like cancer care and animal welfare for the last five years. “Those were offline activities like putting up stalls to sell handmade accessories and donating the proceeds to charity. Raising money for the kids in Gummidipoondi was my first online fundraising project and it showed me that people are always willing to step in for a good cause.”

Ramkumar adds that as she grows older, increasing academic pressure and other school activities do not leave her with much time to pursue offline fundraisers as often as she used to. “With crowdfunding, where beneficiaries are screened and verified by the platform, I can make a difference with a click of a button.”

Varun Sheth, co-founder of crowdfunding platform Ketto, says they get over 500 campaign requests from teenagers annually, out of which 60 percent make the cut. Parents and teachers are consulted before a project goes live and each child is guided by a campaign manager. At present, there are about 178 live campaigns being led by teenagers.

“About 70 percent of teenage campaigners are from metros. Many in non-metros are not aware of crowdfunding, so it becomes difficult to build enough trust for a fundraiser involving money. Sometimes, language also becomes a barrier,” says Sheth. According to him, charity-based campaigns by teenagers get more online traction compared to medical/health care fundraising campaigns. 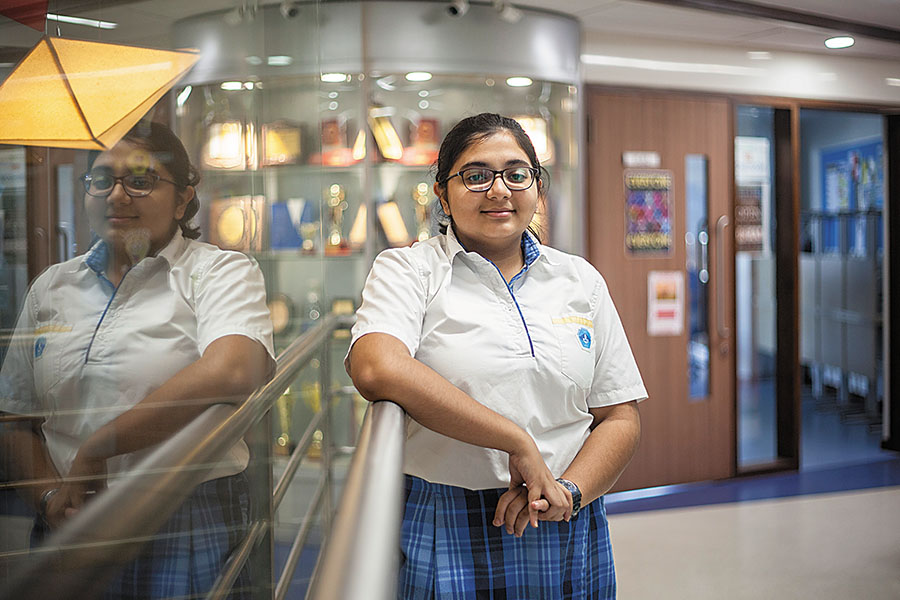 Dyuti Basu, 16, will use the ₹1.56 lakh that she has raised to sponsor the education of underprivileged children
Image: Aditi Tailang

Connecting with a cause
Dr K John Vijay Sagar, professor, department of child and adolescent psychiatry, at the National Institute of Mental Health and Neurosciences (Nimhans), explains why teenagers go out of their way to make a difference. “The process of identity-formation for personality development happens between 13 and 17 years of age. Around this time, teenagers are highly influenced by their peer group,” he says. “Thanks to social media, these peer groups have conversations about social issues and developments, which give kids a heightened understanding of their neighbourhoods and the world. So, if one friend takes up crowdfunding or other voluntary work, others get inspired to do something similar.”

According to Dr Sagar, teachers and parents must guide teens to be independent and leverage social media positively. “This will make them responsible adults who work more proactively to help during social problems or crises.”

Parental encouragement is also what influenced young Dyuti Basu. Every year, the student of Jamnabai Narsee International School in Mumbai accompanies her parents to their village in Pandua, West Bengal, where she conducts art classes for children and her family distributes clothes to villagers. Engaging in any act of charity, she says, is a lesson in humility. 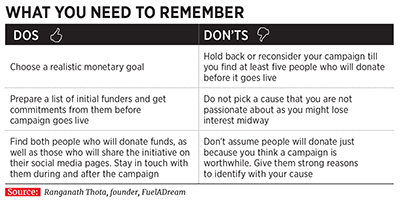 The 16-year-old has embarked on her first online fundraising, where she has collected ₹1.56 lakh towards a scholarship programme run by the Nargis Dutt Foundation. The money will be used to sponsor the education of children of daily wage labourers and other underprivileged people.

After the fundraising ends, Basu plans to meet her beneficiaries. “Through the campaign, I get to meet kids who have grown up so differently. They teach me to take good care of my surroundings and the people around me, and never take anything for granted,” says Basu.

For Gurugram-resident Tavishi Singh, crowdfunding is an efficient way to reach more people in a limited time. The 15-year-old from Pathways School single-handedly led an initiative to build a rainwater harvesting (RWH) system that provides up to 10,000 litres of water daily to a facility housing about 500 destitute and mentally-challenged people. The facility, run by non-profit The Earth Saviours Foundation, was facing water shortage after a borewell that supplied water started drying up.

Armed with an official letter from his school, Singh began collecting funds door-to-door in June. She just had a month before the onset of monsoon to raise ₹1.2 lakh. When offline collection around her neighbourhood did not yield more than a couple of thousand rupees, she turned to crowdfunding. In three days, she surpassed the target to collect ₹1.78 lakh. The excess money was donated to the non-profit. “The recharge pits and wells created in the premises will not only provide a continued supply of water, but also replenish groundwater,” says Singh.

The campaign has inspired Singh to build rainwater harvesting systems in other low water table localities across Gurugram. “I believe that crowdfunding success stories will eventually help me take the cause to corporates and encourage them to promote RWH as part of Corporate Social Responsibility.” 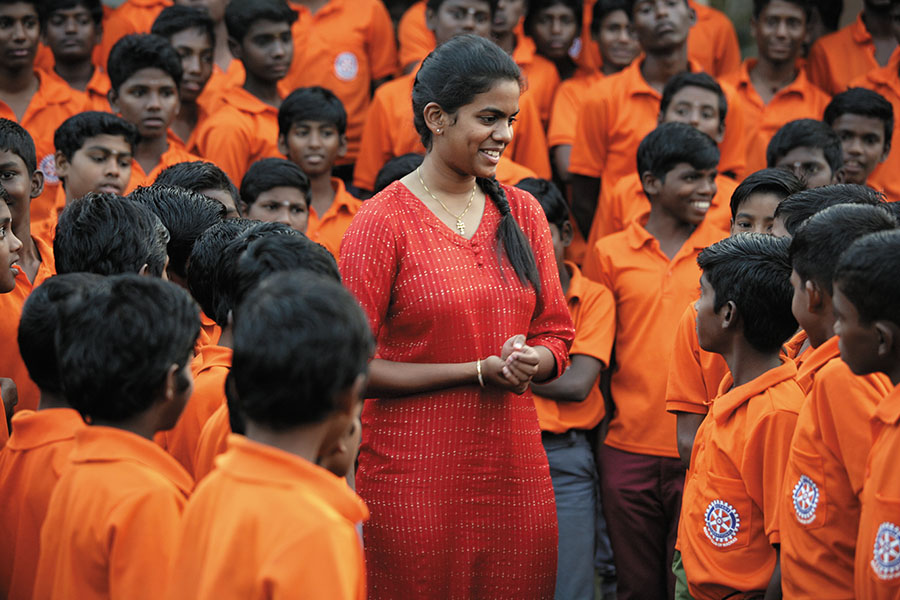 Antara Ramkumar, 16, raised ₹24 lakh to meet the requirements of orphans and poor children
Image: P Ravikumar for Forbes India
Creating a support system
Anoj Viswanathan, co-founder of crowdfunding platform Milaap, says their natural tech-savvy nature helps teenagers create impactful crowdfunding campaigns. “Teens have easy access to better channels to take a cause to groups and people where it matters the most.”

That said, teenagers leading fundraising campaigns must be taught need-assessment and problem-solving skills, believes Monika Shukla, co-founder of LetsEndorse, an online ecosystem of social innovators and non-profits. The venture offers a platform for student-run impact clubs to be part of a community where they can connect with others working to solve similar problems in different parts of the country. “Consolidating projects and initiatives will provide data to guide teenagers. They will be able to share stories about fundraising challenges and replicate success models,” she says. 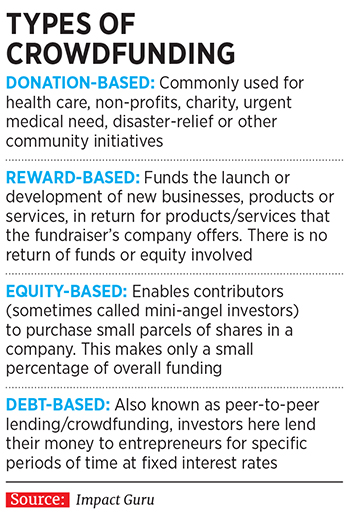 FuelADream is collaborating with schools to train children on how to use crowdfunding productively. Founder Ranganath Thota says since last year, they have reached 2,500 children across 23 schools in India. “We conduct workshops on how to manage a campaign, social media messaging, understanding consumer behaviour and storytelling. Post training, we create a WhatsApp group where we continue to educate teens about best practices and provide step-by-step guidance,” he explains.

Manju Balasubramanyam, principal of Delhi Public School (DPS) Bangalore North, says since 2016, 300 of her students have collected over ₹1 crore through digital campaigns for various causes. “It is important for kids to connect with and relate to the mainstream society beyond their regular curriculum. Leading such campaigns makes them more aware, accommodating and inclusive towards others,” says Balasubramanyam, who received the National Award to Teachers from President Ram Nath Kovind in 2018.

According to Crish Chengappa, 16, from DPS Bangalore North, who raised ₹2 lakh to sponsor five subsidised heart surgeries for children, crowdfunding showed him that people are kind and that perseverance in maintaining the momentum of a campaign pays. “Awareness is everything and social media can be a boon when used ethically,” he says. “Most importantly, I learnt that a teenager can save lives too!”