How Competitors use CSR when Market Conditions Change

In tougher times firms use more, not less, CSR as a vehicle for product differentiation

While firms are increasing their involvement in CSR related practices, the idea that companies can “do well by doing good” is steadily gaining acceptance among consumers, researchers, and the media. Not only can CSR increase company profits by increasing the consumer’s willingness to pay for the product, it helps prevent consumer boycotts and credibly signals the unobserved high quality of the firm’s products. Good CSR standards can also help employee morale and retention as well as attract more and/or cheaper sources of capital from altruistic investors. Finally, businesses can utilize CSR as a means to preempt more costly regulatory actions, and even influence regulations in such a way that their competitors face higher costs than those firms practicing CSR. 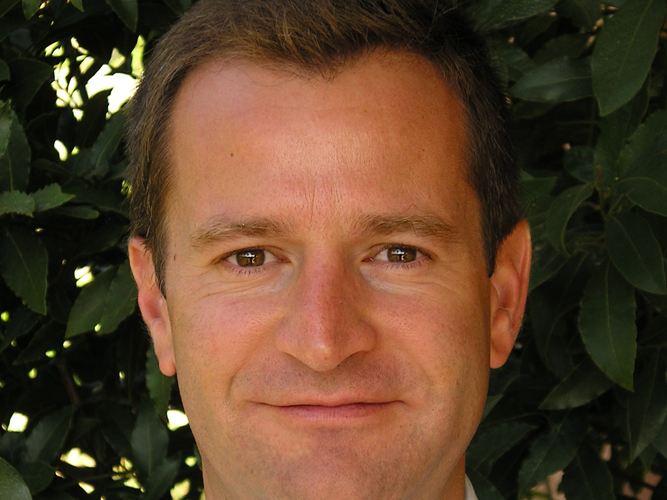 Daniel Fernández Kranz, Professor of Economic Environment and Country Analysis, IE Business School.
Does the increasing involvement of firms in CSR lead to consumer pragmatism?
But how do consumers evaluate CSR in a world where firms could be using it simply as a strategy to raise profits? This question has been the subject of a recent investigation, in which we studied the responses of 54 individuals to interviews that asked their opinions about corporate social responsibility. Their responses suggest that consumers are pragmatic, i.e. they understand that CSR is in part profit driven, but that in spite of this pragmatism, consumers still value the socially responsible actions companies take.

Figure 1. Consumers show a good deal of pragmatism in relation to CSR 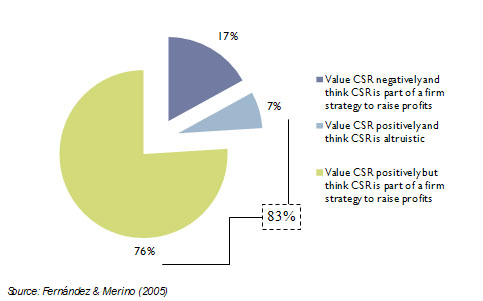 Furthermore, although the majority of respondents (93%) said they think that CSR is part of a firm strategy to do well financially, a large percent (82%) of those who saw CSR as profit driven still said they think CSR is a benefit to society at large.
Figure 2. Consumers’ willingness to pay for CSR 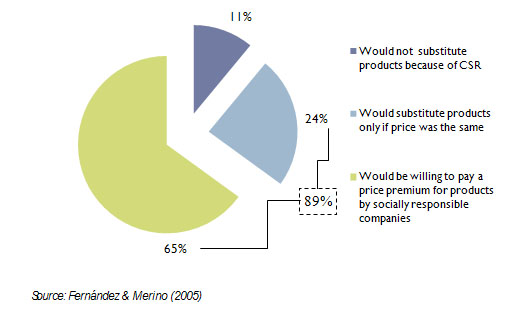 When asked about the possibility of substituting one product for a similar one based on CSR attributes, a vast majority (89%) would swap the unethical product for the ethical one, and 65% of individuals would be willing to pay a price premium for those positive ethical attributes.


Table 1. Consumers’ willingness to pay for an ethical good.

Of the consumers willing to pay a price premium, the majority would consider a premium between one and five percent of the unethical good’s monetary cost, although there was much variation in this case according to the price of the good.
Consumers’ willingness to pay a price premium depends negatively on the price level
When the price of the good is low (participants were asked to think about a deodorant costing 1€), consumers said they would consider a price premium of a very high percentage (100%) for the ethical good. But, when asked about their willingness to substitute one pair of sports shoes that cost 50€ for another one costing 60€ (the production of the first one employs child labor but the second does not), a vast majority of the interviewees (80%) said they would not substitute the cheaper (and more unethical product) for the more expensive (and more ethical) one. This result coincides with the findings of other studies indicating that consumers’ willingness to pay a price premium for ethical goods decreases in percentage with the price level of the original good.
Finally, when consumers were asked to punctuate and rank order a series of company practices from the most preferred to the least preferred, there was a clear asymmetry in their responses, which indicates that consumers are more willing to penalize firms for their unethical behavior (for example, a violation of human or labor rights) than to reward them for good or positive behavior (for example, charitable giving).
Corporate Social Responsibility and Pragmatic Companies: In tougher times firms use more, not less, CSR as a vehicle for product differentiation
From a company’s standpoint, it is important to know not only how consumers perceive CSR but also how competitors use CSR when market conditions change.
In a recent investigation we studied the CSR undertaken by U.S. listed companies in relation to the degree of market competition. The findings indicate that companies engage in CSR more often and more intensively when neck-to-neck marketplace competition increases the returns of a differentiation strategy. For example, we ranked firms in our dataset according to the change in social performance between 1994 and 2005, from the best performers to the worst performers, and found that those companies that have undergone the largest decrease of CSR ratings in 2005 respective to their historical means (Wal-Mart and Home Depot among them) all simultaneously encountered a decrease in the intensity of competition. Likewise, those companies (such as Intel and GM) that experienced the largest improvement in the CSR levels are also those operating in sectors in which market competition has increased the most.
Another interesting result of our investigation is that the companies’ response to an escalation in competition is twofold and symmetric: increasing the good practices but also decreasing the negative behavior.
Further evidence shows that firms use CSR as a vehicle for product differentiation when competition increases and an increase in the intensity of competition raises the dispersion of CSR among firms in a same industry. In particular, the results indicate that CSR is a substitute rather than a complement to other strategies frequently used to differentiate products. For example, in industries where the rate of product innovation is high (measured by expenses on R&D), firms tend to rely less on CSR as a differentiating strategy, suggesting that firms in these industries achieve an already high degree of product differentiation through innovation.

Tweets by @forbesindia
A Matter of Trust
Turning Green to Gold