A double whammy for rural Karnataka 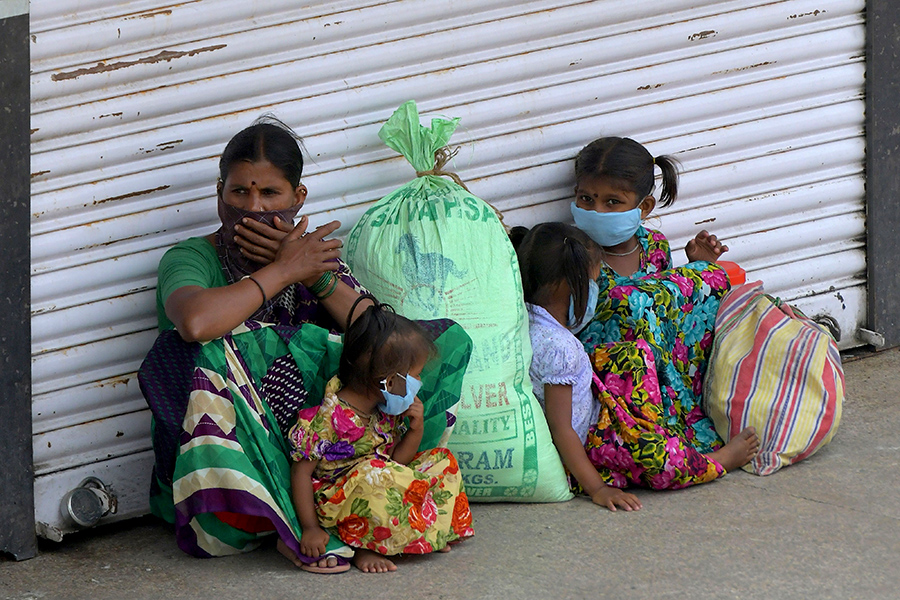 A family of migrant workers wait to board a bus back to their hometowna as Karnataka government opened inter-state transport buses for people stranded during the government-imposed nationwide lockdown against the spread of COVID-19 coronavirus, in Bangalore on May 3, 2020.
Image: Manjunath Kiran / AFP via Getty Images

The first case of COVID-19 in Karnataka was confirmed in Bengaluru on 9th March 2020. Within a span of two months, as on 9th May 2020, the total number of cases in Karnataka has risen to 753, out of which 354 are active cases, 368 have recovered and 30 have not survived . Sharing a border with Maharashtra has meant that the risk is higher for northern Karnataka. Maharashtra is the worst affected by COVID-19 in the country and the districts of Karnataka that share borders with Maharashtra such as Belagavi, Gulbarga, Vijayapura and Bidar have 85, 69, 48 and 23 positive cases respectively.

Apart for Bangalore and Mysore, the highest incidence in the state is in the north of the state. Belagavi, Vjayapura and Gulbarga have the highest incidence among the northern districts. All three share a border with Maharashtra. It is natural to expect that these areas will experience spillover from Maharashtra and this works as an additional way in which new COVID-19 cases may appear. The state borders are strict on paper but interactions among people are fluid and crossing state borders happens easily. This used to be something which was unambiguously good for a united India, but now in times of lockdown the same fluid movement of people causes more difficulty in containment.

Since 31st March 2020 there have been cases where origin of the disease is unclear indicating possible community spread in Bengaluru. These cases have uncontrollably risen and spiked on 24th April 2020 with 19 positive cases  where the origin couldn’t be tracked. The last travel related case was on 14th April 2020, after which cases came from clusters or unknown sources. Overseas travel was the origin for the index patient of COVID in Karnataka. After which three clusters emerged which were at Nanjanadgu Pharma Company in Mysore, Tablighi Jamaat and any other Delhi Travel,and interstate travel. Based on the origin of spread, number of cases on account of unknown sources are now highest in Karnataka at 319 cases. Most of these cases emerged in Bengaluru, Bagalkot and Gulbarga.

The populations in the north are at even greater risk, since the vulnerability of the population there is high. Vulnerability is the inability to absorb any external shock and so, one may either succumb to poverty and deprivation or illness. That is exactly what COVID is: an external shock. The higher COVID hit rural areas are already some of the worst performing districts when it comes to availability of health care services. They are some of the poorest regions in the state with little or no means to fight the COVID battle alone. They are also the districts with least favorable health facilities as seen in the maps below. The northern belt suffers from an already low hospital beds to population ratio, compared to the state average. Belagavi and Gulbarga (two districts sharing borders and with high COVID cases) also have the lowest number of doctors per 10000 population in the region. The pandemic has put immense additional pressure on the facilities for setting up isolated beds and heightened requirement of healthcare workers which makes these districts further vulnerable.

The sharing of borders and the high COVID occurrence has thus, been a double blow for these already poor and vulnerable regions! 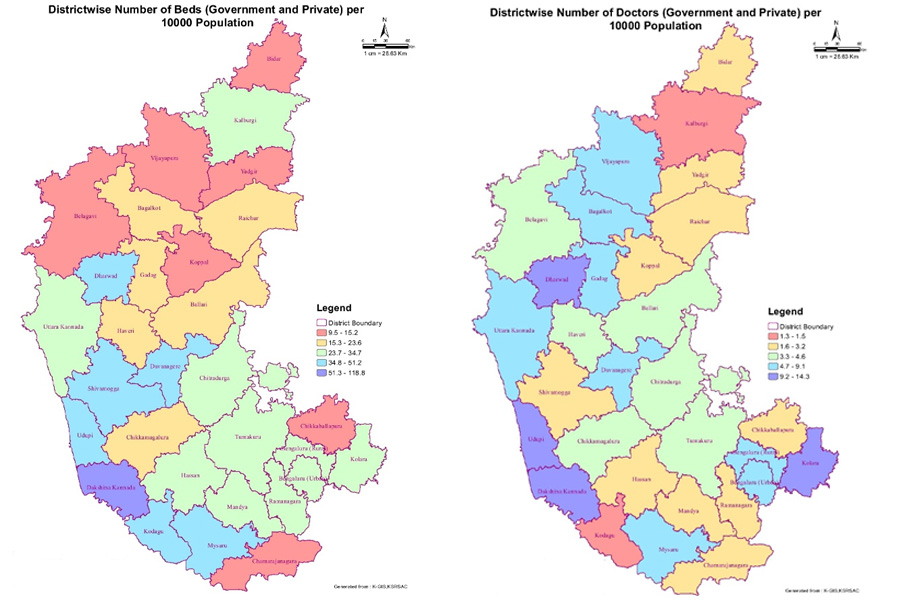 The incidence of confirmed COVID-19 cases almost distinctly maps into areas with the greatest numbers of old and young dependents. One can also clearly see parallels between districts with high dependency ratios and number of confirmed COVID-19 cases. This dependent population is also the most vulnerable when it comes to risk of infection and death due to infection. The average age of people who died because of COVID-19 is 66.3 years. This makes the older age population especially vulnerable during the pandemic. Moreover, 43% of the 60+ aged population are own-account workers or contributing family members and thus, are exposed to higher risk of severe poverty and hunger during these uncertain times. 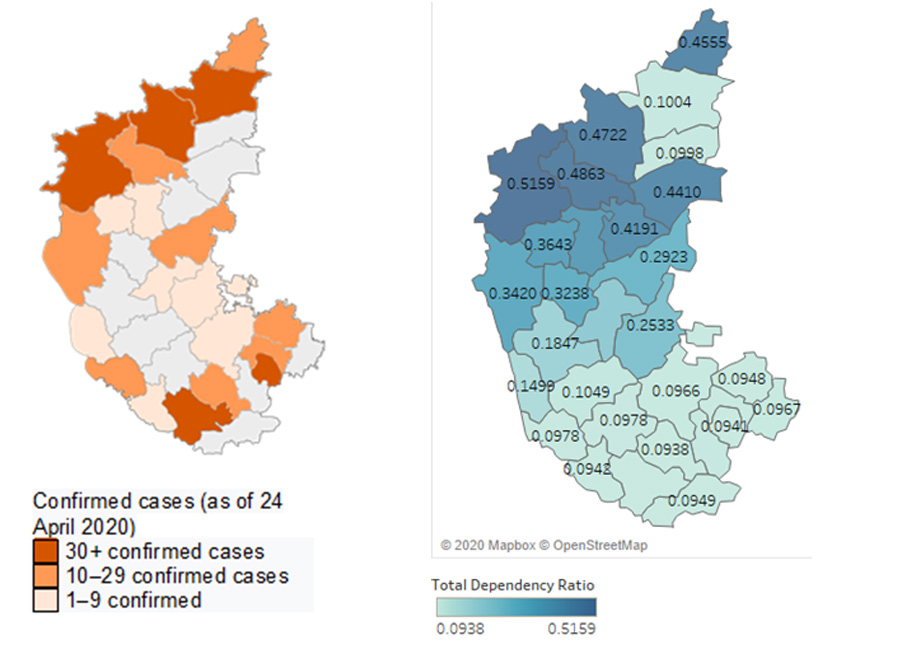 The state level death rate due to COVID is currently 3.9%, which is higher than the national average of 3.1%. Within Karnataka, this is also the fatality rate for Bengaluru and Vijayapura. However, alarming death rates have been recorded for districts such as Tumakuru with 28%, Kodagu with 20%, Dakshin Kannada with 16%, and Chikkaballapura with 10%.

The biggest concern that these vulnerable districts will face, as the phase 3 of lockdown opens up some parts of the country, will be coping given their existing capacity constraints and vulnerability. Belagavi and Vijayapuraare also districts which have seen high levels of out migration . In phase 3 of the lockdown as the stranded migrants return home from more infected but better equipped regions to less equipped regions, the already burdened districts have the potential of seeing even more exposure and a much higher infection rate.

Further, nearly half of migrants in Bangalore are from rural pockets within the state. These migrants will also now be travelling homewards and adding to the pressure on an already burdened rural administration. The situation looks grimmer as the north of the state has historically been more vulnerable, as stated earlier. Apart from Belagavi, no other highly affected district displays adequate health infrastructure. One of the peace time measure of health infrastructure is the prenatal and postnatal care that is provided. Using NFHS-IV data we see that Belagavi has the best care and the others namelyVijayapura, Gulbarga, Bangalore and Bangalore Rural are some of the worst performers in the state.

Attention will have to be paid on these regions as well and not only on the large metropolitan areas of Bangalore and Mysore. While the urban pockets may have more cases, they also have far more facilities and resources at their disposal to cope with the crisis. This is explained by the fact that the recovery rates of COVID-19 in these districts is much higher than that of the vulnerable regions. Little is known of the state government’s efforts in the regions outside of the metropolitans. The government has appointed ministers to be in charge of districts, since many MLAs were not even visiting their own constituencies.  However, even after the appointment, very little is known of (or maybe is being done) measures taken in the rural areas of Karnataka. As we move into the next phase of COVID containment and lockdown, much more emphasis is required on the rural areas, with the home bound migrants now exposing our hinterlands even more.

Tweets by @forbesindia
Opinion: FM balances fiscal prudence and need for stimulus
Marko Stout continues to wield his supremacy as a multimedia artist