For years, the world has been witnessing a quiet but monumental shift of power from men to women. Today, the Great Recession has turned what was an evolutionary shift into a revolutionary one.... so much so that the recession is now known to some economists and the more plugged-in corners of the blogosphere as the “he-cession” as more than 80% of job reductions in the US have fallen on men.” Financial Times, June 22, 2009

We all know recessions can be unpleasant. Many suffer as consumers stop buying, banks cease to give out loans and companies cut back and layoff workers. For all of a recession's gloom, our current economic downturn provides an opportunity for greater gender diversity. 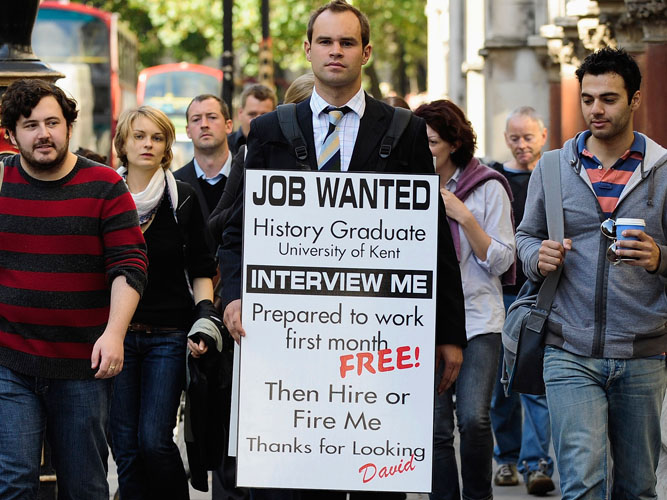 Image: Reuters
Was it easy to increase workforce diversity during times of growth? Perhaps not. But with a lot of effort and focused human resource initiatives, more and more women and other “minorities” have been promoted into the management ranks. Albeit, the level of diversity is still far from desirable given that 50% of the Fortune 1,000 companies had no women in top executive positions in 2000.(*1) Thinking ahead, especially in times of crisis and downsizing, we need to consider “percentages”, as the measure of diversity, in different ways. Restructuring might provide an unprecedented and overlooked opportunity. We take here gender-diversity as an example, but this way of thinking may be applied for all kinds of diversity (ethnicity, age, education, etc.) Gender-sensitive downsizing is a strategic form of work-force reduction with the objective to maintain or increase the proportion of women in management positions.

It takes two numbers to calculate diversity
Let us look at an example of a company that has 200 managers at the VP level and above. About 30 of these managers are women. Hence, the proportion of female managers is 15% (which is close to the current average in Europe). Many corporations use proportions and percentages as key performance indicators for their HR policies. In fact, diversity officers are often held responsible for increasing this percentage over time (to the extent possible within their power). In the past, an obvious strategy for them was to make sure that there were plenty of high-potential women in the talent pool who were candidates for managerial positions. Yet, in times of crisis and redundancies, promoting women from the talent pool to increase gender diversity may prove to be difficult. For starters, there will be fewer empty management positions to fill.

Lay-off homogeneity increases diversity
In times of crisis or restructuring, we need to consider the factors influencing downsizing decisions. Normally, the decisions on who goes and who stays are based on rational motives, such as historic performance of the people, their tenure, cost structures of departments and each person’s skills compared to the anticipated future needs of the company. Yet there are other motives at play (often taboos) that impact restructuring decisions more subtly and tacitly. These include favoritism, friendship, physical traits and perhaps the social status and needs of employees.

Some of the taboos result from expectations which lead to pre-judging a person’s suitability for a task or position based on demographic factors and not on objective performance characteristics. Statements like: “Not sure we’re ready to have a woman in that role,” “It would be fine for me, but the other men won’t accept it,” or “We’ll hire her because we have to, but we’ll make sure she doesn’t want to stay long,” are not uncommon. Most discrimination is, however, not overt and systems may discriminate by supporting assumptions about how to get performance, not performance itself.

A phenomenon at work is called tokenism (*2) and focuses on unconscious gender assumptions. High status majority members (often men) exhibit the following behaviors: 1) they don’t give the minority credibility until it is earned (“I’ll believe she can do it when I see it”) 2) they see the minority person as representatives of their group, attributing behavior and performance to others in the group (“We need a woman’s point of view, let’s ask Eva”) 3) they notice and remember poor performance of the minority more than good performance (“She didn’t do as well as I expected”). The low-status minority members (women) frequently feel responsibility towards the minority group (“If I don’t do this, no woman will ever be asked again”) or feel increased role conflict and overload (“Why am I processing 50% more loans than everyone else, and doing these committees?”). Once a certain threshold level of representation (20-30%) has been reached, this phenomenon of tokenism decreases.

Therefore this recession provides great opportunity as we can choose to downsize in a more diversity-friendly manner (3*) and thereby influence the threshold level needed for discrimination not to be an active force. Gender-sensitive downsizing, for example, can achieve the same level of cost-reduction as “normal” downsizing, but it also aims to secure a healthy gender diversity level for the future. And we should not forget that the denominator (the total number of managers) is also worthwhile keeping an eye on when we revert to times of growth, so that the proportions do not get skewed by many new non-diverse hires.

Let us go back to the initial example of a company with 200 high-level managers. Imagine that the management headcount must be reduced by 20%. If this is done according to the proportions of male and female managers, this would mean that out of the 40 people to be laid off, 15% or six would be women. In practice, this number might often be higher because minority groups traditionally suffer more due to the subtle discrimination that works against them.

If, however, the human resources department – backed by the CEO – sets a new standard for gender-sensitive downsizing with an objective of laying off only three women, then the company’s gender diversity would increase because the proportion of female managers would be 17% instead of 15%. Perhaps this seems like a small jump for humankind, but considering the starting point and the length of this journey, this recession can accelerate the small steps and thereby constitute great progress at the end of the day. Proportions matter.

(Karsten Jonsen, Research Fellow, Willem Smit, Research Fellow and Bettina Büchel, Professor of Strategy and Organization at IMD)*1) Helfat, C., Harris, D. and Wolfson, P. (2006) The Pipeline to the Top: Women and Men in the Top Executive Ranks of US Corporations, Academy of Management Perspectives, 20: 42-64.
(*2) When groups, teams or organizations have minorities represented by less than 15-20% there is a clear case of tokenism.
(*3) Must be applied in ways that are compliant with national/regional legislation.