Changes In Women's Leadership During The "He-Cession"

We are used to gender gaps in wages or in management positions. In some industries (finance or computer services, media, advertising) where there is poor information about range and standards of base salary, there is a $10,000 gender gap in MBA salaries. One of the reasons is women's perception that they run a 'social risk' when negotiating for higher salaries. Women believe that asking for higher pay makes them look less agreeable and charitable, overly demanding and not particularly other-oriented, which would correspond to their gender role. Therefore, it is not surprising that participants in negotiation experiments allocated more money to men than to women assuming that women would be satisfied with less. Are women prepared to settle for less?

The recession, however, has created a new gap, but this time in the opposite direction. According to the latest statistics in the US, 82 percent of the job losses have befallen men. Some sectors of the economy such as health care or education traditionally dominated by women are less sensitive to economic turmoil than typically "male" occupations such as manufacturing or construction. As a result, the male unemployment in the month of June 2009 was 10.6 percent, while among women it was 8.3 percent, which makes it the largest gap in the US since 1948 when records started. 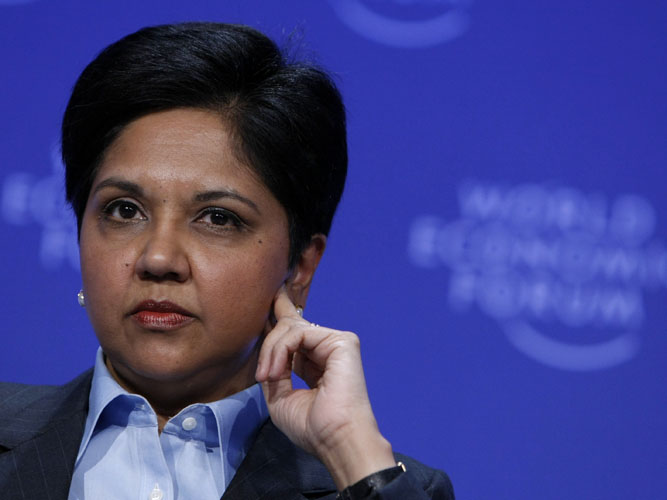 Image: Pascal Lauener / Reuters
Indra Nooyi, the Chairman and CEO of PepsiCo which the author serves up as an example of a woman leader
"The great he-cession"-label was invented and some have speculated it could be the silver-lining for women. Journalist Reihan Salam went even a step further predicting that the axis of global conflict in this century will not be ideologies, geopolitics, race or ethnicity, but rather gender.
Can the recession change not only regulation systems, but also gender roles? There is some evidence that the financial crisis has led to some changes. There are more males in nursing classes in US. In response to the crisis in both Iceland and Lithuania, two countries hit quite hard from the crisis, females have been elected Prime Minister (Halla Tomasdottir in Iceland and Dalia Grybauskaite in Lithuania). There are publications in the press that while male self esteem has been downsized, women have gained some since in many cases they have become the breadwinners. Companies are finally taking diversity seriously. In November 2008, for example, Siemens appointed a Chief Diversity Officer (Jill Lee).
But the recession will soon be over and unless women work hard to develop their leadership skills, their route up the corporate ladder will be as difficult as it used to be before the recession. Women need to respond to some specific challenges and questions. I would like to focus particularly on the topic of authenticity. Do women have an authenticity problem?
There is a misperception among women that they need to be like men in order to be successful. Often, they try to emulate a male model and the result would be toning down their feminine style, for example by smiling less, by suppressing an inclination to be ‘warm and nice’, or by dropping the pitch of their voice. Indeed, agentic male behaviors such as projecting self-confidence, ambition, power or being in control, are associated with effective leadership. But doing only what men do is not enough. When women are perceived only as agentic, they violate the gender stereotype, which prescribes communal female values such as being helpful, friendly, caring and gentle. The result is a perception of lack of authenticity. Interestingly, uppity women are subjected to more sexual harassment as a form of punishment for being ‘deceitful’.
In order to be successful, women need to be perceived not only as agentic, but also as communal. Take Indra Nooyi, the Chairman and CEO of PepsiCo, for example. On the one hand, she is very agentic and projects confidence and control in negotiations, but on the other – she is a very caring, warm and maternal boss, who feels happy to give employees advice on how to dress correctly. Neglecting the communal aspect of behavior could lead to perceptions of being unauthentic with all the negative consequences for female leaders.
Crises can serve as opportunities. This current downturn is an opportunity that women can ill afford to waste. Re-examining authenticity is a good starting point.
Ginka Toegel, Professor Organizational Behavior and Leadership at IMD. She is the Program Director for the Strategic Leadership for Women program. The program helps participants to find their unique leadership style that blends agentic and communal values.