Beyond the short term fix

A brave new world
In a recent Tomorrow’s Challenges article, The current financial crisis and beyond, two longer term effects of the current financial crisis were highlighted. The first is that credit will continue to be tight and more expensive and the second is that government regulation will only grow and be enforced more stringently. As nation states struggle to put their economic houses in order, there are other worrying trends for the global enterprise. One is protectionism. In a move to conserve foreign exchange and support domestic job creation, governments are erecting thinly disguised barriers that will hamper free trade. There are also protectionist moves that restrict capital flows and the free movement of labor.

These are short term fixes, but we must recognize that governments (especially those that are democratically elected) work to a short term agenda between election cycles. Global firms will have to learn to factor this political reality in their decision making. Another related trend is the growing importance of social and environmental performance of the firm, together with its economic performance. With the USA signaling its intent to sign the Kyoto treaty, the environmental movement has acquired a new momentum. The rising disparity between the “haves” and “have-nots”, both across and within nation states, is leading to calls for more inclusive growth. Striving for environmental and social performance while fighting a tough battle to sustain economic performance, will present an interesting trilemma for corporate leaders. 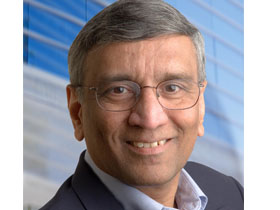 Professor Bala Chakravarthy
Companies have tried to capture these trends in composite scenarios. These range from the optimistic, where cool heads (both public and private) re-establish world order through a fair process of give and take, to the pessimistic, where the parochial behaviors of key actors plunge the world into an economic and social mess. The challenge for corporate leaders is to be ready to deal with any scenario that may emerge, and try where they can to influence the emergence of a favorable scenario.
Dealing with this brave new world calls for four key leadership contributions.
1. Quiet diplomacy
Since government is likely to be a more intrusive force in the business sphere, corporate leaders can no longer deal with it at arms length. They have to learn to partner with the government and steer it to act in the best interests of free market forces. This will not be easy given the distrust between government and big business arising out of the current crisis. Governments have resented having a gun held to their heads and forced to save large corporations that are “simply too big to let fail.” The public at large also has no love lost for corporate chiefs who have collected huge bonuses when employees at lower levels in the firm have simply been let go. Corporate leaders clearly start with a handicap, but have no choice but to engage with government and non-government actors when new regulations are formulated.
Whether it is in the matter of global trade, work visas, climate change, or social net for employees, corporate leaders must have their voices heard. And yet, this is not a skill that many corporate leaders are endowed with. The world still remembers the sorry footage of the chiefs of the big three US auto companies being chided by the US Senate when they came jetting in their private planes to ask for a government dole! But there are other hopeful examples. When corporate leaders succeed it is when they shun the limelight. What is called for is quiet diplomacy.
2. A coordinated flow
Fundamentally, strategy for the future will need to be flexible, adapting to the shifting landscape. Strategy making will require thoughtful experiments, objective assessments of how these have fared, and either rapid scaling up or quick exit based on what these assessments show. Strategy will be more about learning and less about planning. This will also mean that strategy making will have to be more participative, connecting the distant geographies with the firm’s global businesses and core functions. Leading such an organization will require a paradoxical blend of more delegation and more coordination. Corporate leaders will have to become master organizational architects, providing the firm with the flexibility described above and yet deriving global efficiency through growing standardization and elimination of duplicate activities. The ability to create the context - the shared stage on which people from different parts of the organization can perform in a coordinated fashion will be the key.
3. Extending the firm’s boundaries
The historic definition of the firm will also be under scrutiny. The firm will have to migrate parts of its value chain to places where they can be better performed. Why should production be in Europe or the US when it could conceivably be done better in China? Do all R&D centers need to be in Europe and America or could they be someplace in India? All eyes in this regard will be on BRIC countries, which have a large talent pool. But this talent pool will be sought after not only by international players, but also by homegrown challengers from these very countries. Knowledge workers may not belong then to any single organization but be part of an innovation ecology, helping to create new knowledge that is available to many and not proprietary to any. Managing new kinds of partnerships will be another leadership challenge.
4. A geocentric mindset
The deconstruction of the value chain may also mean that companies will end up with multiple headquarters. The firm will have to be politically and socially legitimate in these multiple geographies and not just economically viable in them. This is called geocentricity. Building a geocentric mindset would call on corporate leaders to see their firm as truly transnational, absorbing multiple norms and values from its many host countries. This will be the toughest challenge of all, especially in a political environment where governments are pushing for narrow national identities.
By Professor Bala Chakravarthy, Program Director of Leading the Global Enterprise. He also teaches on the Advanced Strategic Management Program, Accelerated Executive Development Program, Program for Executive Development and the Orchestrating Winning Performance Program.