Leadership for a better world

We live in the midst of the worse financial crisis in more than 50 years, and take heart in the decline of oil prices as a sign of the easing of yet another crisis – the “energy crisis.” Yet, at a time when new ideas are the only hope for our economic salvation, the real “energy” crisis is to be found in the inability of tired, old institutions producing the innovation and creativity that we are so desperately searching for. In fact, today’s real energy crisis is represented by our inability to rise to the occasion with new insights and approaches. Despite the enormous pool of talented people that have characterized almost two decades of globalization, most of these individuals and their ideas continue to be ensnared in organizational cages left over from periods of capital- and labor-intensiveness, designed for command and control, rather than liberation and excellence. The results: great people achieving mediocre results. What an extraordinary waste!

While the word “talent” is bandied about as if it were an undifferentiated resource, I believe, instead, that all talent issues begin with the individual: Talent is not a plural! We must consider the organizational consequences of restoring a degree of individuality to the talent issue. In my recent research on virtuoso teams[1], we reaffirmed the old adage that real success – and a better world – is more easily achieved by surrounding yourself with people smarter than you and, then, letting them show it. This means accepting a challenging team environment and adopting new leadership practices better suited to an impresario than to a manager. While such a suggestion may seem fanciful, the seriousness of our present situation suggests that such flights of fancy might well be a small price to pay for helping talent contribute to a better world. 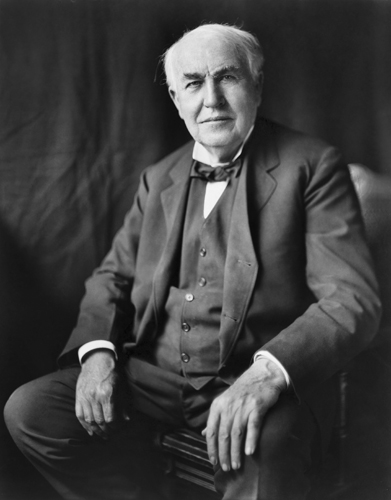 Image: Wikimedia Commons
Thomas Edison, was credited with inventing incandescent light, recording sound and adding sound to motion pictures, in reality did it with a team --“The Muckers”
I begin with the belief that real professional talent is precious and should be devoted to living up to its promise, in the pursuit of higher-order societal goals. Leader-aspirants should strive to fulfill this objective, and our work in the Virtuoso Team project examined how this can be done.
Smart People Leading Smarter People
Our research focused on a number of great teams that were defined by big, ambitious, personally-risky goals and a relentless search for the absolute best talent, two things that gave them a head-start on “greatness”. They then applied leadership approaches that allowed their assembled talent to shine as brightly as the leader had anticipated. Among the leadership practices we observed were:
1. Leader as talent-scout
All of the teams that we studied featured a leader who devoted substantial time and energy to identifying potential talent. J. Robert Oppenheimer scoured American campuses for the right scientific skills to bring together the Manhattan Project, which led to the atomic bomb and pioneered “big science”. Miles Davis was always on the lookout for the next “big sound; the next new idea”. We were amazed by the amount of time team leaders personally devoted to getting the best people obtainable, position by position. In every case, being a “talent scout” was always a central piece of the leadership role.
2. Listening rather than telling
If you assemble all-stars at each position and pay the premium for doing so, then listening should be the leader’s most important activity. We saw this in all our teams. Davis, who revolutionized jazz with different all-star bands in the 1940s, 50s, and 60s, was characterized as a world-class listener, despite his reputation for opinionated assertiveness. Only by listening can the team leader understand and appreciate the potential contributions of the talented individuals.
3. Focus on collaboration and an exchange of ideas (not idea-hoarding)
Ideas have value only if they’re shared. All our teams succeeded because they shared rather than protected ideas. This does not mean that there was no competition within the teams; far from it. Thomas Edison, who, as “the Wizard of Menlo Park,” was credited with inventing incandescent light, recording sound and adding sound to motion pictures, in reality did it with a team --“The Muckers” – and built his “invention factory” so that ideas between developers and machinists could move rapidly in both directions. In nearly all of our teams, small, cramped quarters promoted intensity, immediacy and full-bandwidth team conversations, ensuring keen awareness among all team members.
4. “Fail faster to succeed sooner”[2]
When facing big risks, taking small ones frequently allows a team to move faster and with less chance of catastrophic failure. The use of “prototypes” is a different way of learning, and all of our teams used experimentation and failure to achieve fast-learning. For example, take Leonard Bernstein and his all-star team who created a Broadway revolution with the West Side Story project. Dances were deliberately fashioned out of continuously-changing modules in order to respond faster to audience reactions.
5. Challenge ideas not the “person”
Virtuoso teams thrive on direct, and impolite, challenges to ideas, without diminishing the individuals. While each all-star team member’s potential is accepted as a given, every idea/action is fair game for improvement to the team’s benefit. Such tolerance for challenge profoundly changes team dynamics and makes the leadership role much more involving, but the results are worth it. Comic genius Sid Caesar and his virtuoso writing team, which included Woody Allen and Mel Brooks, were challenged to create a new show every week. They wanted every show to be memorable, and their slogan became: Polite teams yield polite results!
6. Let individuals soar
Perhaps in our efforts to be inclusive, we’ve allowed the “we’s” to so dominate the “I’s” that we’ve wound up “just average”? If you go to the trouble and expense of finding and recruiting great people, let them be great. Don’t bend them to fit the team. General Leslie Groves, who helped the Manhattan Project succeed, adopted the leadership attitude of always asking: “What can I do to make it easier for you to do your job?” [3] Our idea is to put talented individuals in positions where they can be as good as their promise, and then help them succeed, for all of our benefits!
We believe that one best way of employing leadership for a better world lies within the ability of talented people to fulfill their ambitions in the pursuit of team, organizational or societal goals. This is not easy to do, and defies currently-fashionable, and overwhelmingly negative attitudes towards ambitiousness, elites and “stars”. Quite the contrary, we are in favor or all of these: being ambitious; allowing justifiable elites to emerge on the basis of superior performance; and letting people become stars. We believe that organizations that win in the talent-wars do it one individual at a time. And, that by enabling talented people to fulfill their potential, we increase the likelihood that we all win.
Professor William Fischer, Professor of Technology Management at IMD. He addresses the topic above in Driving Strategic Innovation, a program he co-directs together with MIT’s Professor Charlie Fine. Professor Fischer also teaches on the Leading the Global Enterprise and Orchestrating Winning Performance programs.
[1] Andy Boynton & Bill Fischer, Virtuoso Teams, London: FT/Prentice Hall, 2005.