How entrepreneurs see the world

Is the crisis over? Will this recession be a double-dipper? While pundits and experts debate, entrepreneurs are figuring ways to create opportunities in the current environment. It should be no surprise that in general, entrepreneurs are undaunted by the financial crisis we have endured throughout the past year or the prospects of its conclusion. Crisis, or more specifically, the management of crisis, is their day-to-day business; not only a job description but a source of new opportunities. So while pensioners watch their retirement account values plummet, entrepreneurs have an eye for where that money is going. Here are some of the things entrepreneurs see.

Flight to value
One obvious implication of the financial crisis is that people have less money to spend. This explains why Hormel’s SPAM, an inexpensive canned precooked meat product, has reported significant sales growth over the past year. To meet demand, Hormel increased production capacity and even manufacture on weekends. Used car sales have experienced strong demand since the start of the crisis. Discount retailer Walmart has also performed relatively well the past year. Clearly, there is money to be made helping consumers cut costs. 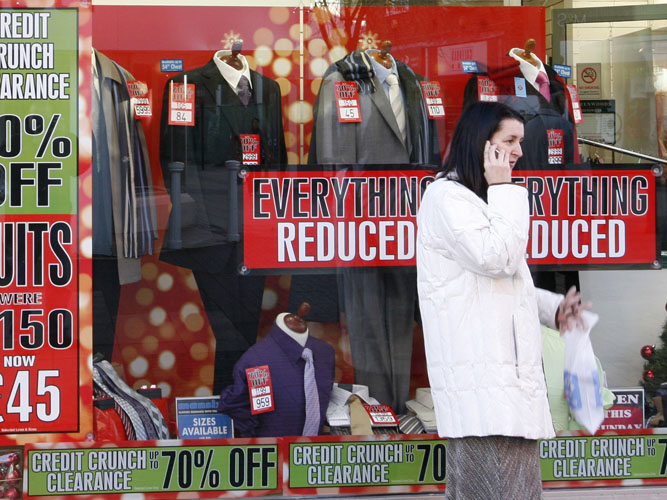 Image: Phil Noble / Reuters
One obvious implication of the financial crisis is that people have less money to spend and sales become the obvious option to invite customers
The need for hope
The Rockefeller Institute of Government recently released a study showing that lottery sales are strongest in weak economic times. The lotto’s highest recorded rate of growth was during the recession of 2001-2002. Finding ways to offer cash-strapped consumers with some combination of inexpensive entertainment and even a remote chance to invert their financial misfortune can translate into new product offerings and new business models.
The need to connect
Before September 2008, the social networking site LinkedIn added 1 million new users about every 20 days. During a six-month stretch after the crisis began, the growth rate increased to some 1 million new users every two weeks. In a time of crisis, people need jobs. People need support. People need to connect. This phenomenon is as true at home as it is professionally. Sales of sex toys and pregnancy tests have also increased in the wake of the financial downturn.
The ultimate resource
Creation of new value and transformation of hope into reality are both the result of putting the ultimate resource – human ingenuity – to work in tackling tough problems. Thanks to the financial crisis, a lot of good people are out of work and entrepreneurs don’t need to scrounge for talent the way they have to during boom times. They need to create pathways for the more proactive to find them and then inspire the folks who show up to believe in their own ingenuity. Entrepreneurs know that the future comes from what people do, irrespective of large external forces that may for the moment appear out of their control.
Making the future
In 1975, a year of recession, inflation and 9% unemployment in the United States, Microsoft was founded. In July of that year, Time Magazine ran a cover story entitled, "Can Capitalism Survive?" What we know about entrepreneurship suggests a different question: So long as people are willing to embrace the entrepreneur within, “Can economic crises survive?” The answer, even in 1975, was “No!” And what made it happen was not billions of dollars poured into big banks, but entrepreneurs who constructed new opportunities, new ventures and new markets that generated unprecedented economic growth in spite of, or perhaps because of a crisis. Entrepreneurial logic applies equally to individuals and large firms. Whether for yourself or for your business unit, opportunities are waiting for you to create them.
Stuart Read is Professor of Marketing at IMD. He teaches on the MBA and Orchestrating Winning Performance programs as well as in the Program for Executive Development. Saras Sarasvathy is Associate Professor of Business Administration at the University of Virgina’s Darden School.

This article is based on a contribution that was first published in Business Life, British Airways’ in-flight magazine.