Trash and Treasure: Perspectives on the Pile

Where the rest of the world might see a problem, the entrepreneurs turns the problem upside down to convert it into an opportunity

Heaps of garbage.  Rotting agricultural waste. Litter. And not just a little bit. Europe alone generates 1.8 billion tonnes of waste each year. If that number seems too big to get your arms around then consider this; your personal annual contribution alone is 3.5 tons. This is a problem on the scale of, and in many ways connected to, global warming. While many look at waste as difficult at best, and perhaps revolting at worst, the expert entrepreneur sees the starting point of opportunity. Appreciating this inversion offers insight into of the significantly different way expert entrepreneurs view the world as compared with the general population of managers in business - a unique perspective that gives expert entrepreneurs an advantage in turning problems into money.

Waste as means
If you conceive of a new idea within a big company, the natural inclination is to apply some of that firm's primary resource to pursue the possible opportunity. Money. But if you are on your own, that initial impulse is curbed by the fact that the money you might use is also your home equity, your child's college fund or your credit cards, financed at 22% compounded annually. Which explains why expert entrepreneurs naturally learn to look a little further to see what alternative resources might be available to be put to use in creating an opportunity. Resources that can be acquired cheaply, on loan or ideally for free. And there's plenty of trash for free...at least for now.  Consider the following three stories that illustrate this logic in different ways: 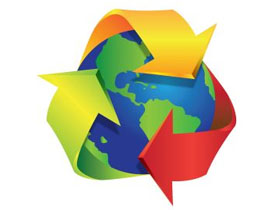 Reverting
In and among that heap of garbage in the introduction to this article is plastic. And like the 2.5% of plastic bottles that actually do get recycled, the remaining 97.5% that currently end up in landfills are originally made from petroleum. Which is why Kevin DeWhitt started a little firm named Agilyx on the west coast of the United States. His venture implements a process he designed that takes mixed consumer and industrial plastic waste as an input and generates sweet crude oil as an output. Watching his production increase above a tanker railcar per week, and at the same time oil breaking the $100/barrel mark, top-tier venture capitalists Kleiner Perkins Caufield & Byers, together with Waste Management, and Total S.A., a major oil and gas firm, invested $22 million into Agilyx at the start of April 2011.

Capturing
And if you are now wondering whether the energy you put into your car came from waste plastic, Shakeel Avadhany wants to capture the waste you generate when you use it. Only about 15% of the energy from the automobile fuel goes to moving the car forward or running the accessories. The rest? You guessed it. Waste. One of the (many) ways you lose energy from your car is when you hit a bump. It slows the car, and the energy from the bump is dissipated by your shock absorber. Avadhany's startup Levant Power builds shock absorbers called GenShocks that capture a vehicle's waste energy. And if Avadhany can achieve the midrange of the 1-6 per cent efficiency he hopes for, his idea could cut fuel use by more than 250,000 barrels every day in the US alone.

Converting
But waste is everywhere. Even in Bihar, the poorest of Indian states, where 68,000,000 people (more than 2/3 of the population of the state) live without access to electricity, there still remains waste that can be put to entrepreneurial use. Formed in 2008, Husk Power Systems has created a system, a business model and partnerships upon which they build micro-power-generation facilities that deliver electricity to villagers in places that the Indian government has publicly said are too remote to ever be served by the grid. The fuel used by the generators is rice husk, the agricultural by-product of growing rice. Previously left to decompose (and generate greenhouse gasses) by the roadside, Husk now pays farmers for rice husk, which it gasifies it so it burns cleanly, and provides power in more than 200 rural villages.

The Power of the Entrepreneur
It is no accident that each of these examples is related to energy. Alongside waste and global warming, access to sustainable energy is another of the pressing problems of our generation. And the thread common to each of these stories is that in addition to starting with waste and creating new ventures from it, these firms are using business as a solution to a social problem at the same time. There is no sense of a trade-off between a profit agenda and a social agenda. There is no expectation that a government or a non-profit organization is going to come along and perform a miracle that cleans up the world and/or generates clean energy for future generations. There is only action that bridges these objectives into something valuable on each of the dimensions. And this provides the second insight we should not waste.
The insight that where the rest of the world might see a problem or might see a trade-off, the entrepreneur looks further to turn the problem upside down so that it becomes an opportunity, or to make the trade-off a false choice.  So now you see the challenge. Look for what seems a staunch dilemma. One which appears to position a clear positive against a clear negative. And appreciate that this is where the entrepreneur builds bridges, making money solving both at the same time. This is the power behind the entrepreneur.


Stuart Read is Professor of Marketing at IMD. He co-directs IMD’s Program for Executive Development and is one of the co-authors of Effectual Entrepreneurship. He will also teach a plenary session during IMD’s Orchestrating Winning Performance entitled “Effectuation: Transforming Uncertainty into Opportunity