He didn’t just photograph stars; he was a star himself 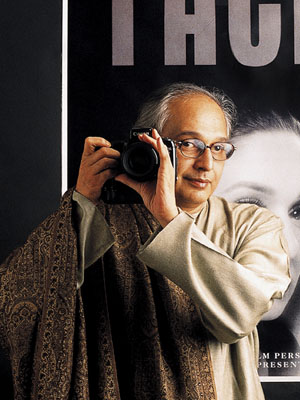 A few weeks ago, I was being photographed by one of today’s hot shot lensmen. The new breed. The guys in designer gear who arrive with an entourage of more than eight assistants and demand star treatment from magazine editors who hire them. At the end of the impersonal, brisk shoot with hardly a single meaningful exchange of words between the moody, scruffy photographer and moi, I turned to the stylist on the shoot and said, “That’s it? Are we done?” I didn’t want to linger for a single extra moment or even ask to see the images on the computer. I could as well have been shot by a robot. I don’t remember the man’s name. I wonder if mine registered with him. It was a job. We’d got it done. Finished. No time for small talk. No time for gup-shup. No time for something as basic as politeness. Time most certainly is money for this lot. Pack up was announced. The assistants fluttered around, putting away reflectors and lights that weren’t used (but paid for).

And I thought of Gautam.

Invariably dressed in a simple, comfortable white kurta-pyjama. Never rushed. Always chatty and cheerful. Unfailingly courteous to one and all — be it a gawky , desperately young first time model, or a Forbes’ List billionaire. No wonder he retained his position as an ace portraitist. No wonder people lined up to get themselves photographed by him. No wonder Gautam was a legend.

In a way, I bullied my cousin into getting ‘professional’ about his hobby. “Start charging for  your pictures,” I suggested. That was over twenty-five years ago. He looked aghast. He was genuinely horrified. This was when he was working at Lintas, after a short stint as a lecturer of chemistry, and shooting for fun.

At the time, there were three or four outstanding, world class commercial photographers working  in Mumbai. There was the cerebral snob, Jehangir Gazdar, who flew his own plane. Mitter Bedi, who specialised in industrial photography, Ashwin Gatha who went overseas and did very well as a fashion photographer, ‘Balsi’ (Balsara) who died young,  ‘Obi’ (Oberoi), who disappeared into the Lonavala hills and took to horticulture, and Jitendra Arya who ran the Times of India photography studio.

Gautam soon joined the Big Boys, but instead of picking the far more lucrative route via advertising campaigns, he decided to concentrate on magazine work, which paid a pittance. He gravitated to movie star shoots most naturally. He was comfortable with them and most importantly, he made them feel comfortable, especially the ladies. There was a time when a cover shot for top film glossies could not be assigned to anybody but Gautam. Stars were prepared to wait, take flights, change their schedules, change their entire personality if needed, to be photographed by Gautam. This was especially true of newbies in Bollywood, who believed a portfolio shot by Gautam was as good as a passport to instant fame. Many times, it was! Gautam’s reputation as a star maker was firmly established by then.

His early shoots with Smita Patil, Shabana Azmi, Sridevi, Rekha, Kajol, Aishwarya Rai and most famously, Madhuri Dixit, did not just accelerate Gautam’s career but created a big buzz around his lovely leading ladies as well.  He was crowned the Pharaoh of Faces!

A few years down the line, Gautam graduated from shooting movie stars and models, to photographing personalities. From J.R.D. Tata to Lata Mangeshkar, he managed to cover an impressive gamut of celebrities, including a few famously reticent individuals. How Gautam managed to relax these mighty people is another story. And this is where his genius comes in. Gautam was a remarkably intuitive person, who knew exactly which buttons to press, especially when he sensed his subject’s shyness or self-consciousness.

Gautam’s greatest gift as a photographer was that he saw beauty in everybody he photographed. And so genuine was this attribute, he made each and every one of his countless subjects feel beautiful… look beautiful. Momentarily, people forgot their flaws, big and small, and lulled themselves into believing they were indeed special… alluring… attractive. Or at any rate, worth a second look. What may have started out as a mere technique to relax those in front of his lens, soon became an intrinsic part of Gautam’s character.

From the hundreds of mails I have received since he passed away, most have been from regular people narrating a sweet, touching incident with Gautam playing a stellar role. Almost without an exception, these spontaneous mails talk about how he made people feel, not just look.

Everybody left his studio with a big smile, convinced they were indeed stars, if not in the movies, then in their own eyes. How absolutely wonderful!

View some of his great work here Gautam Rajadhyaksha: The Pharaoh of Faces

Tweets by @forbes_india
Trash and Treasure: Perspectives on the Pile
The Power of Mind Over Money