India Budget 2012: This Budget will be the best opportunity for this government to take fiscally prudent decisions, as the next one would be the last before elections and, as a result, populist 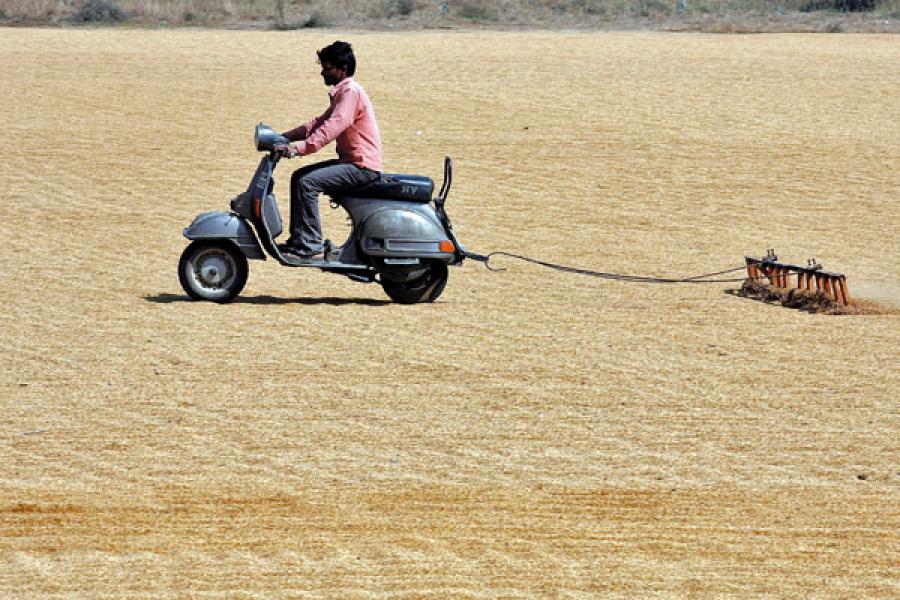 Image: Amit Dave/ Reuters
FOOD FOR THOUGHT A worker spreads paddy crop for drying on the outskirts of Ahmedabad. Political decision-makers are now debating the best way of providing food security to every Indian without upsetting the precarious balances of Central finances

As this edition of Forbes India was going to bed, India’s executive set-up was in intense negotiations with political decision-makers over the contents of the government’s most-awaited policy pronouncement—the Union Budget.

The Planning Commission and other advisors to the government were ranged on one side, with the National Advisory Council headed by Congress president Sonia Gandhi on the other, and the Prime Minister’s Office believed to be playing mediator. The question being debated was providing food security to every resident Indian.

The NAC wants every citizen to have the entitlement, but those in the government are wary of the enormous strain it would put on the country’s fiscal health. A person privy to the consultations says that both sides have understood the positions and were showing willingness to compromise. The NAC, for instance, has climbed down from its position of implementing ‘its version’ of food security to having some form of food entitlement. That has been accepted by all.

Now, the struggle is to find the best way to do it without upsetting the precarious balance of Central finances. Food security for all would at least double the current subsidy of about Rs 64,000 crore, raising the fiscal deficit to unmanageable levels and making the country unattractive to investors.

Yet, food security, along with universalisation of secondary and higher secondary education under the Rashtriya Madhyamik Siksha Abhiyan, remains the most important policy around which this Budget will be constructed.

The government is already expected to miss the fiscal deficit target of 4.6 percent of GDP by at least 80-100 basis points. In its review of the economy released on February 22, the Prime Minister’s Economic Advisory Council (PMEAC), headed by former RBI governor C Rangarajan, indirectly admitted that the fiscal deficit is at around 5.5 percent.

There is a growing acceptance that this Budget will be the last occasion to come clean and lay bare the facts, however bitter they are. That means no window-dressing and sleight of numbers. And the ball is in the finance minister’s court, as the Reserve Bank of India, stated bluntly in its last review.

The Central bank said the government should put its finances in order so that capital could be used to create productive assets such as industries and infrastructure. “The forthcoming Union Budget must exploit the opportunity to begin this process in a credible and sustainable way,” the RBI said in its third quarter review of the economy in January.

The Central bank and other top bureaucrats have warned the finance minister and Prime Minister that the economy risked returning to the fiscally radioactive pre-reform days when the seventies’ and eighties’ profligacy had brought it to the brink of implosion.

“The fiscal situation in the country is a cause of serious concern,” the PMEAC said in its review. “At present, it is not very different from the precarious position that existed in 2001-02,” it warned, advising that the government should enhance tax revenues, contain subsidies and transfers and increase social and physical infrastructure spending. “These require decisive and tough measures and the government must initiate them in the forthcoming Budget itself to bring the economy back on the high growth path.”

They have argued that if food subsidy were to increase, something else—such as fuel subsidy—has to go. That is why economic analysts were happy to hear finance minister Pranab Muhkerjee say he is “losing his sleep over the rising subsidy burden”.

NR Bhanumurthy, professor at the National Institute for Public Finance and Policy (NIPFP), a think-tank that often works closely with the government on public policy, feels that it is time to increase taxes on diesel to bridge the subsidy gap.

Bhanumurthy says one way Mukherjee may try to rein in expenditure is by keeping allocations for the 12th Five-Year plan, which starts from April, at the bare minimum.

One government official involved in the consultations said the attempt is to find a credible mix of policies and fiscal prudence. He said the question that policy-makers are trying to answer is: “Can we agree on a methodology to deliver food security that is also fiscally sustainable and doesn’t raise the hackles of the states?” The states are key to ensuring food security as they will be the implementers, and the government is treating them with kid gloves after many of them rallied against the Centre’s move to set up the National Counter-Terrorism Centre. The solution has to be acceptable financially and genuinely enhance food security. Deficit hawks are arguing that any loosening of the purse strings should come with an agreement on efficiency improvement.

Politically speaking, reducing expenditure and raising revenues are the two most unpopular things for any government to undertake. Raising the price of diesel, for instance, is sure to spawn widespread protests as opposition parties will immediately paint the move anti-farmer and inflation-fuelling.
But if this government has to bite the bullet, it has to be now, as Budget 2013 will be the last one before elections and most likely populist. The one after that will be only a vote-on-account as the General Elections would be round the corner. That means any tough measures and economic reforms will have to be announced now. But views differ on the approach.

KV Kamath, non-executive chairman of ICICI Bank and chairman of software giant Infosys, says the government needs only de-bottleneck the economy and growth will follow. “India certainly needs to focus on inclusive growth. Our situation is very different from that of Greece. There is dire poverty in many parts of the country and we have to design our policies around this reality. If there is a deficit in the process, we can live with it,” Kamath said. Others such as Columbia University economist Arvind Panagariya want the doors to be thrown open quickly; allowing foreigners to invest in retail, for instance.

Without doubt, the government has pushed itself too far with loose fiscal policies in a global environment that remains stubbornly volatile.
The PMEAC clearly said that it was wary of shocks emanating from the Eurozone, though it downplayed the risk, pointing out that the European Central Bank was pumping the market with liquidity. Under the circumstances, it becomes all the more important for Indian policymakers to maintain investor interest in the country.

As Boston Consulting Group’s Janmejaya Sinha says , implementing the goods and services tax could be a good beginning. However, the most important thing that everyone, especially investors, is looking for is direction.

Yet, to add to Pranab Mukherjee’s discomfort, the Budget is coming immediately after the state elections, the results of which have the potential to plunge the country into a political crisis.

Correction: This article has been updated from the version carried in the magazine.