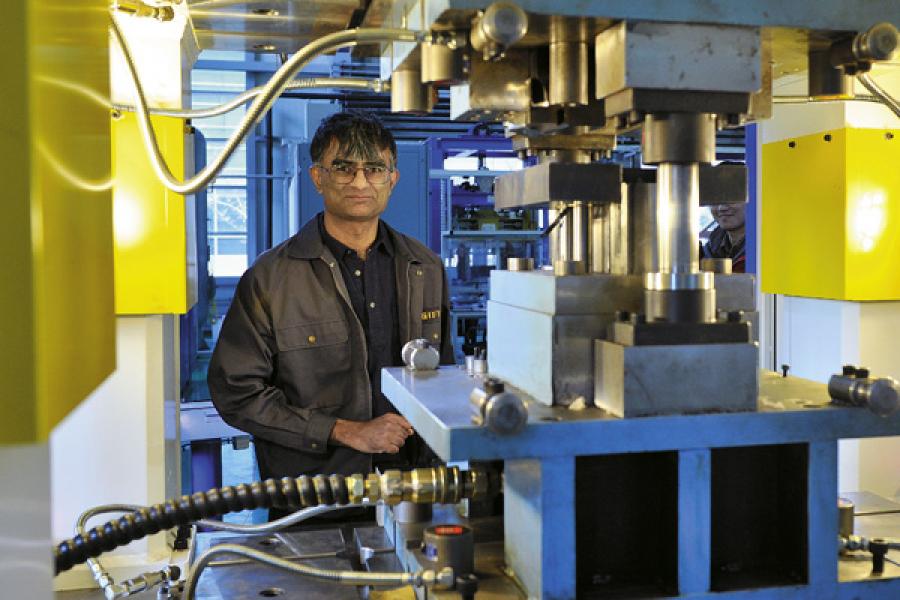 Every year, 17 million people use the Channel Tunnel, the undersea rail network that connects the United Kingdom with north of France. Considered as one of the Seven Wonders of the modern world, 37.9 km of the 50.5 km-long tunnel passes under the sea. To make sure that each and every part of this sophisticated transport network is as safe as possible, authorities recently opted for a new kind of steel that is used to lay the tracks.

For Harry Bhadeshia, who led the team that along with British Steel (that eventually became Corus and later acquired by Tata Steel) invented the steel, this only reiterated his belief that the metal has an “unbelievable variety that remains unseen by the outside world.”

This is not the only invention that has come out of the lab of the renowned metallurgy scientist and Tata Steel Professor of Metallurgy at the University of Cambridge in his 40-year research career. From making better steel pipes to transport oil to coming out with a ‘unthinkable’ and ‘super strong’ steel that is now being tested in defence and aviation sectors, Bhadeshia’s research has invoked serious debates and produced inventions worth millions of dollars, and much more in impact.

Looking back, it only seemed natural that Bhadeshia would choose a career in research. Growing up in Kenya, where he was born to his Indian parents, one of the fondest memories for Bhadeshia was a “small laboratory with a chemistry set, a plastic skeleton, a microscope, a self-assembly radio set and a variety of electrical items” that his parents had helped to set up.

By the time he finished his schooling in 1970, the family was forced to leave Kenya and move to London. This was when “fate,” as Bhadeshia’s friends term it, came into play. Keen to contribute to his family, the teenager landed a job at a metallurgical lab owned by the British Oxygen Company.

In the lab, he got hooked to the “excitement and responsibility” that came in testing tiny samples, whose results were crucial in building large plants. .

The fascination turned into a passion when Bhadeshia explored the world of steel, which was complicated and at the same time had an “unbelievable variety” that remains unseen by the world at large. Explains Bhadeshia: “Every year, 1.3 billion tonnes of steel is produced, but there is no need for the outside world to understand it…it is a product made in an extremely sophisticated and controlled environment…it is so reliable that no one needs to worry about it. On the other hand, everyone needs to worry about the operating software in their computers as these are not very well developed products!”

In 1979, when Bhadeshia published his doctorate thesis at Cambridge, an old, but still simmering debate was ignited once again. Since the 1930s, the metallurgy community had been debating on the process that leads to “phase transformation” of steel. Bhadeshia showed that one of the phases in steel, bainite, is formed through a process of “diffusionless transformation” and not by “diffusional transformation.”

Says Bhadeshia’s former Cambridge student S.B. Singh, who is now professor, Department of Metallurgical and Materials Engineering at IIT Kharagpur: “His work settled the debate. Sure, there are still some who would think otherwise, but even my studies thereafter have vindicated Professor Bhadeshia’s thesis.”

Immediately after the blockbuster start to his career, the Fellow of elite Royal Academy of Engineering focussed on research at the intersection of lab and its practical application in plants. “We usually claim that findings in the lab can be extrapolated to large-scale production. But I realised that in a lab we try to oversimplify the practical challenges of running a plant…in labs we tend to reduce the problem and find solutions without worrying about the original problem. By collaborating with industry, we can avoid this,” says the scientist.

Not surprisingly, two of Bhadeshia’s most influential findings have come at this intersection—the rail steel used in the Channel Tunnel and superbainite. The second is Bhadeshia’s personal favourite.

“It is the strongest low alloy steel ever produced and is more than six times stronger than ‘mild’ or conventional steel. It is also the world’s ﬁrst bulk nanostructured material. Superbainite is something that people couldn’t even think of being possible,” says T. Mukherjee, a metallurgist and former joint managing director at Tata Steel.

Meanwhile, Bhadeshia continues to be a teacher and a guide to research students. His lectures in Cambridge are popular for simplifying complicated scientific theories. “At those rare times when he doesn’t know the answer to a student’s question, he is honest enough to admit it and asks for time before he can get back with the answer,” says Singh. Adds Bhadeshia’s Cambridge colleague Mathew Peet: “He always makes a great contribution and expects/demands a high level of quality. This means we can produce much better research by working with Harry.”

Outside the lab and the classroom, Bhadeshia bonds with students by talking about cinema over a cup of coffee or tea. More often, he has everyone in splits with his “corny jokes.” When the conversation does lead to metallurgy, a tech-savvy Bhadeshia uses his smartphone to draw pictures to make his point clear. These talks have also led to useful innovations. “His students in South Korea made some applications for the smartphone so it is possible to index electron diffraction pattern or make calculation about steel transformation using the phone these days,” says Peet.

Even when in India, Bhadeshia likes to keep interacting with students. The affable scientist has “strong links” with Tata Steel and has made a few trips to the steelmaker’s facility. “At Jamshedpur, even while Bhadeshia would spend time with company officials at the plant, he loved to go to local schools and spend time with them,” says Mukherjee.

Bhadeshia has also had other collaborations in the country of his origin. This includes sabbaticals at IIT Bombay and the Indian Institute of Science in Bangalore, where he has held mathematical modelling workshops. This year, in November, the scientist will be in attendance when IIT Kharagpur inaugurates a new steel research centre. He is also working on a project at the institute that is trying to develop a new steel plate material.

“There is a lot of work on steel that is being done in India,” says Bhadeshia. In February, his lecture on steel in South Korea will be attended by scientists from the Atomic Power Station in Kalpakkam via a video link.

When not sweating it out in his labs, Bhadeshia likes playing squash. But this is when he is at home in London. Right now the scientist is in South Korea helping the Pohang University of Science and Technology (POSTECH) set up 12 laboratories to cover all aspects of steel. In everything that he does, Bhadeshia follows a simple rule: “The goal is simply to be much higher than the reach.”