Does articulating your corporate values matter?

Listing your corporate values is not enough—companies need to wrestle with their cultures to make a difference, distinguishing them from their peers and updating them as they evolve. 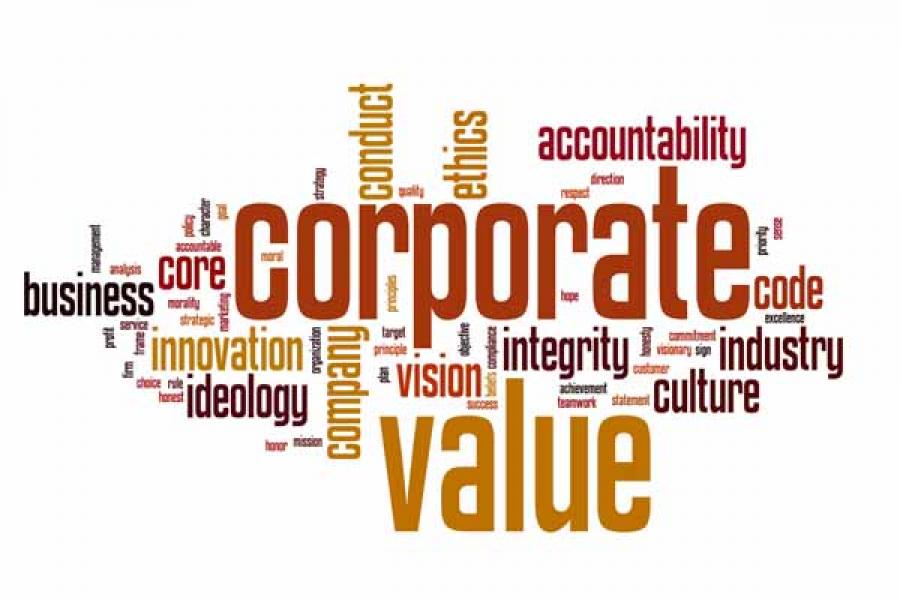 Corporate values are commonplace. They are stated on corporate literature and easily found on company websites so that visitors can get a sense of what is important to the organisation.  Stating values is also a way to shape internal stakeholders’ understanding  of the company and an attempt to influence their behaviours.

Although the values stated may not actually reflect the real culture on the ground, they do represent a “wish list” of what the company wants their culture to be and by dint of drawing up a list, the firm can begin to understand the complexity of its nature. This is especially true for global corporations with diversified markets and products where defining core values can be a useful exercise in clarifying what things are also core to the business.

So does it really matter what list of values a company ends up with as long as they can present “something” to the world?  This was one of the questions I was interested in answering in my paper “Evaluating espoused values: Does articulating values pay off?” co-authored with Karsten Jonsen, John Weeks and Tania Braga.

We looked at Fortune 100 firms from 2005 to 2008 to determine which values were espoused on their corporate websites; whether they differed from companies within the same industry; and how they compared to the  common values of other Fortune 100 companies. We also examined whether any of this was correlated with actual (financial) performance.  Additionally, we were interested in seeing whether companies changed their values over a period of time and whether this had any effect on performance.

Be bold, be different
What we found was that of the 32 values listed, there was not an enormous difference expressed across industries, but when companies did differentiate themselves from their industry peers, it had a positive effect on their firm’s performance.  The implication being that when actively seeking some uniqueness from the industry norm, even in how they shape their cultures, the firms in question outperformed others in their industry.

What seems to matter too is that companies who show more dynamism around their values – those that change them over time – outperform firms who kept theirs stable.  We would argue that these firms are seen to be more actively engaged in a conversation about “who” they are, what their culture is and in which direction they are taking their business, precisely because they are wrestling with their organisational culture, rigorously defining and articulating it. In effect, “tweaking” their values shows that these companies are actively trying to reform and improve themselves, which we believe is connected to their financial performance.

Tune into your culture
While it isn’t common for companies to have exhaustive lists of values, what can be seen from our findings is that those companies espousing “a few more” values perform better than those espousing “a few less.”

However, we need to be careful here, as it is obvious that simply creating a long list of values won’t do much good, and could create some confusion. Rather, we believe this somewhat strange result suggests that companies who do more than a bare minimum in articulating their values may also be those that are more actively wrestling with the complexity that is an organisation culture. Business organisations are complex social groups, with many things that they would consider important, core, and valuable to their functioning. It’s also likely that not all of these values are in perfect harmony (“Stability” versus “Innovation”), and so listing a bare minimum may reflect a lack of adequate attention to the trade-offs inherent in any corporate culture. Grappling with the full set of core corporate values probably reflects a greater willingness to work through the tradeoffs.

So the next time you come to updating your corporate website or annual report with your core values, bear in mind the following three points:

A wrestling match with your culture can be a valuable exercise and is the real value behind espousing corporate values.

D. Charles Galunic is an INSEAD Professor of Organisational Behaviour and The Aviva Chaired Professor of Leadership and Responsibility.