How Universal Basic Income could save capitalism

A viable democratic social system must not allow a "winner takes all" approach. 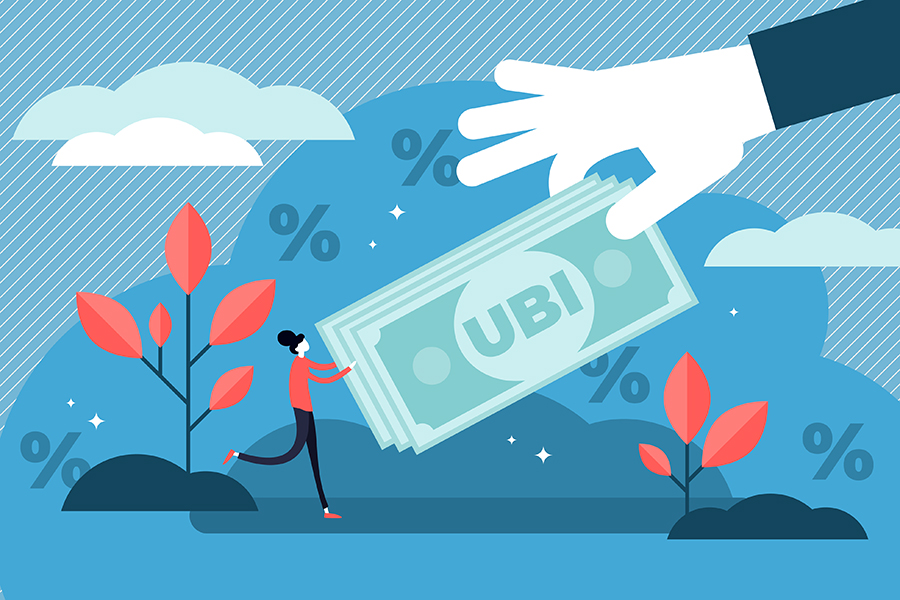 
Long before Covid-19 hit, faith in capitalism was faltering. The global recession of 2008 highlighted the growing gulf between the haves and the have-nots in developed economies. Soon after, the rise of China’s state-managed economy challenged the hegemony of unconstrained free markets.

In the United States, the surging pandemic has sent inequality into overdrive. American billionaires have grown 20 percent richer, as unemployment has soared to record levels. It remains to be seen just how much of this cognitive dissonance the system can sustain before spinning into total chaos.

How did we get here? My new book, On Capitalism and Inequality: Progress and Poverty Revisited, traces our troubled moment to a series of actions and decisions spanning nearly 50 years. The history is too involved to summarise here – I provide a condensed description in this INSEAD Knowledge podcast devoted to my book. Suffice it to say that starting in the 1970s, the more benign aspects of capitalism – honest competition, a free market held accountable to human needs, a bracing element of entrepreneurial risk – retreated as Wall Street speculation came to the fore, heavily weighted in favour of those who already had a firmly planted stake in the system.

Dr Jekyll capitalism, for all its flaws, tended to reward hard work, talent and gumption. The Mr Hyde variety could be likened to a cutthroat game of poker from which most of us have been excluded through sheer financial force. Today’s capitalist economy coddles the card sharks at the top, allowing them to walk away with the vast majority of their winnings untaxed and, when they lose, using taxpayer-funded bailouts to make them whole. As more and more resources end up in the hands of a few, the game itself (i.e. capitalism) is in danger of becoming a formality, a pretext for oligarchy, if social unrest does not end it first.

More money in the system
The way to keep the game going is to put more money into the system. This can be done in several ways. One way is to tax the rich, as almost all social democrats still advocate. The problem is that (surprisingly to the advocates) taxing the rich is both unpopular and ineffective.

The next option for injecting more money into the game is to borrow and/or “print money” (economists call it “quantitative easing” or QE) and hope that the increased consumption resulting from lower interest rates will generate enough economic growth to compensate for the inflationary effect. This gimmick worked in the US for a few years, even though the banks that got the money did not use it to increase lending to small businesses. Instead the benefits of QE went to the hedge funds and private equity funds, so most of the benefits went to the rich after all.

It is time to consider another way of getting money into the system, without funnelling it directly through the banks to the wealthy. It is an old idea, called the negative income tax (Friedman) or Universal Basic Income (UBI). Among the many versions of redistributive tax that have been proposed, in the past, one that keeps popping up in the discussion, is the single tax (impôt unique) on land. Such a tax has been proposed over the centuries by many luminaries – in the 17th century by Baruch Spinoza and John Locke; in the 18th century by the French physiocrats; and more recently by Henry George in the 19th century. George’s basic argument was that wealth produced by work should be owned by the worker, whereas wealth from land ownership should be allocated equally to all, as a source of universal income. His tax on land was proportional to the area of land involved (i.e. wealth), not income.

Four reasons for UBI
Guy Standing, who has been ploughing this academic field for 30 years, says that there are three basic reasons for embarking on a UBI program. The first is what he calls “social justice”. This means recognition that everyone living now, no matter their degree of personal economic success, owes most of it to those who came before. Today’s billionaires did not create most of their wealth, they only acquired it.

Standing’s second reason is that people – regardless of income – should be free to make their own decisions in regard to money, free of arbitrary conditionality and coercion from hierarchical “superiors” or faceless functionaries.

Standing’s third reason is the need to provide basic security, as a human right, harking back to Thomas Paine. I agree with that argument, notwithstanding the fact that some undeserving people will be modestly rewarded, at something close to subsistence level, for not working. That is the price of progress.

I also think there is a fourth reason: national security. I think UBI is the only practical way of reversing the current trend toward extreme economic inequality. If this trend continues much longer, the social and political consequences will be not only very bad, but irreversible.

Need more reasons for UBI? In my view, there is also a compelling moral justification. Milton Friedman’s view of capitalism (refuted only very recently by the Business Roundtable) was famously that the primary obligation of corporations was to increase shareholder value. Perhaps one could say the same of societies. As we are all “shareholders” in the public good, we are entitled to our dividends – our portion of the general prosperity. That’s one way of thinking about UBI.

How to pay for it
My proposal is an amount of the order of $1000 per month in the US, to be given unconditionally by the government to every citizen. Most liberals assume that the extra cost of UBI must be paid for by taxing the rich. Since that seems to be politically impossible, UBI is regarded as a kind of pipe dream, not a serious political proposition. However, there are other possible sources of funding.

I would start by imposing a new excise tax on carbon emissions, to be paid by primary producers and importers of hydrocarbons and products with embodied carbon (like plastics or Portland cement). The excise tax rates could be set to provide annual government revenue of US$1 trillion, mostly from carbon emissions, while also cutting those emissions by at least 10 percent. This could bring motor fuel costs in the US up to European levels. The excise tax rate would have to rise as emissions decline to keep the revenue stream more or less constant.

No doubt the higher excise taxes on fuel would be resisted fiercely, as “regressive”, if introduced on their own. But as part of a package, where most drivers also receive a supplementary income (the UBI) most low-paid workers would be better off, not worse off. Only the rich, with fleets of limousines and private jets, would pay more.

Finally, I would introduce a value added tax (VAT) in the US, explicitly to cut and replace personal income taxes for the middle class. This would be effectively a tax on consumption. As with the carbon tax, it would be felt the least by those with a low income and the most by big spenders.

The impact of UBI
The economic impact of the UBI together with the three tax changes in the US would be roughly as follows. First, bank deposits from UBI would increase significantly. Experience says that low-income beneficiaries would first pay off their high-cost credit card loans and student loans (though maybe not all at once). Money left over after that would be spent on household goods and services, although some of those goods and services would cost more thanks to indirect carbon and EM spectrum taxes. Private debt would fall, but overall the government debt might increase equally, perhaps by US$500 billion per annum.

UBI would actually cut some existing government costs, both for targeted welfare services that would become redundant, and even for prisons and police. Higher personal incomes available to spend on goods and services would also generate more tax revenues for the government. It is unclear how much would be added to the current intake, probably less than the net cost of the UBI. But the net deficit at the end of the day might be quite small or even non-existent.

To be sure, this is guesswork. More extensive and rigorous analyses need to be done, and I would eagerly volunteer to participate in them. But we can say with a reasonable degree of certainty that UBI is the most feasible way to restore mass credibility to capitalism, and there are at least a few promising avenues for implementation. In my view, that is a solid enough foundation to build upon.

Robert (Bob) Ayres is an Emeritus Professor of Economics and Political Science and Technology Management at INSEAD and the Novartis Chair in Management and the Environment, Emeritus. He is the author or co-author of 24 books and many journal articles.

Tweets by @forbesindia
In lockdown, India sees 39% spike in sugar daddies and babies
Astrologer Dr Acharya Vinod Kumar Ojha is your true guide in transforming your life full of positivity