Can trade save forests?

Export-oriented manufacturing and service activity as well as foreign direct investment, are the surprising ingredients of an economic trajectory that promotes forest growth in developing economies, Professor Ashwini Chhatre and his colleagues find 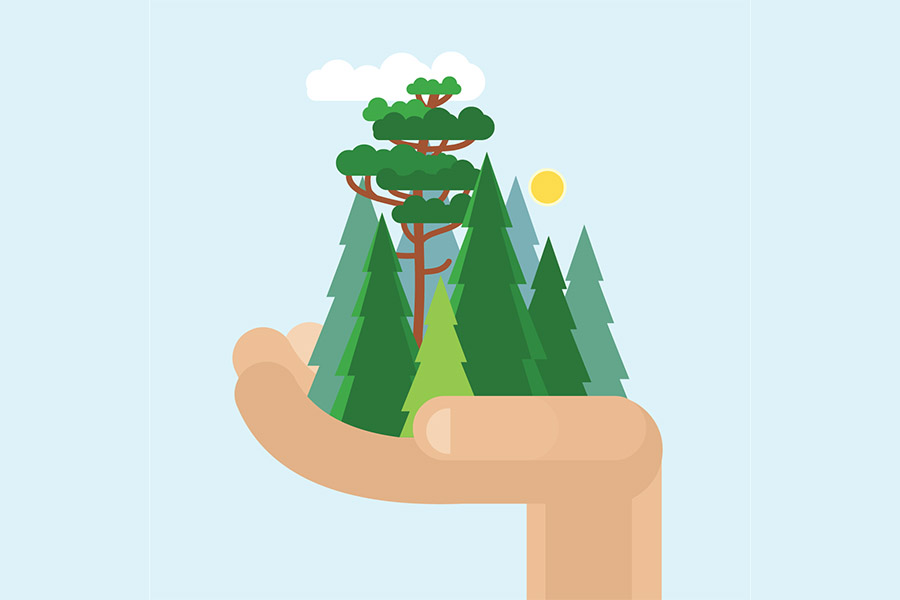 The research of Ashwini Chhatre, faculty at the Indian School of Business, and his colleagues, Lingchao Li and Baodong Cheng from Beijing Forestry University, Jinlong Liu and Wenyuan Liang from Renmin University of China, and Jiayun Dong from the Fujian Agriculture and Forestry University of Science and Technology, on developing countries’ forest resources reveals some surprising findings. Forest transitions can, in fact, be linked to global industrial restructuring, which can spur the development of export-oriented manufacturing and service industries within developing economies, in turn reducing reliance on forest resources.

The authors reach their conclusions in two ways. On the one hand, their research investigates the link between forest transitions and trade activity as well as foreign direct investment (FDI) in developing economies. Second, they present a nuanced approach to forest area growth data by considering forest quality along with forest area coverage.

Why forest transitions in developing economies?
Most developed countries experienced forest transition before the 1980s, and their forest cover has remained stable since then. Developing countries, however, have traditionally faced ‘forest leakage’ or forest resource loss through trade activity, for instance, because they were exporting primary products such as timber into developed economies. According to a 2012 National Academy of Sciences report, the robustness of North American and European forests can be directly traced to forest leakage of 50 million hectare of farmland out of Africa.

How have the forces of 20th and 21st century economic integration and globalisation merged in developing economies to shift the trend from forest leakage to forest transitions? To answer this question, Chhatre and colleagues analyse two sets of indicators for 76 countries including India, China, Vietnam, Myanmar, Indonesia, Brazil, Argentina, Cameroon, and the Central African Republic.

They measure trade and adjustment of trade structure in developing countries through their forest product import value, total exports value, and percentage of non-primary products in total exports. This data is important to determine the link between forest resources and trade structures including FDI.

They use planted forest area to measure forest transitions. Along with forest area, the study also examines the effectiveness of afforestation initiatives or forest protection policies in terms of forest quality, including aspects such as biodiversity and carbon stocks.

Can Trade Save Forest Area?
The analysis shows three correlations between trade structure and forest area:

Primary Product Imports: Forest area is positively correlated with imports of primary products into the developing country. A dramatic increase in forest product imports into Vietnam, for example, is strongly associated with forest transitions or forest area growth.

Non-primary Product Exports: The percentage of non-primary products among total exports has a significantly positive effect on forest volume and forest density.

In an interesting corollary, the paper also shows that the growth of service and manufacturing sectors within a country’s FDI structure has a positive effect on forest transitions. Consider China. Opening doors to the outside world became China’s national policy in the mid-1980s. China started to witness increased FDI in the manufacturing sector. The rapid and sustained development of an export-oriented manufacturing economy absorbed millions of migrants from inland China, reducing the economic and subsistence pressures on forest resources and facilitating forest regeneration.

One way of leveraging this research can be for developing countries to promote FDI inflows into the manufacturing and service sectors by highlighting the positive correlation to forest transitions. In Chhatre’s words, “Not much attention has been paid to the positive effects of economic globalisation on natural resources within developing countries. It is a public good that has not been considered so far.”

A Cautionary Tale: Forest Quality
The research provides evidence that although deforestation continues in these countries, reforestation effects are greater. Afforestation activities are closely related to forest cover increase in the 76 countries under study, as we saw in the Indian forest cover numbers. At the same time, the simple equation of afforestation and concomitant forest cover gains is complicated when we consider ecological factors.

Planted forest areas can have a positive effect on forest volume but not on forest density. Thus, reforestation initiatives in developing countries can accompany declining forest quality. The case of Mexico illustrates this starkly. Abandonment of agricultural land by farmers and conservation policies have led to forest area growth in the Michoacán highlands of Mexico. However, even as forests regrow in Michoacán, they display major differences in ecological structure and canopy species composition compared to the original primary forests.

Within the broader positive narrative of forest transitions, afforestation can thus become a cautionary tale. Native forests are complex ecosystems that evolve over many decades or even centuries. They cannot be fully replaced in quality by monocultures or planted trees. The study concludes that policymakers need to focus on forest quality along with quantity.

As Chhatre argues, “Not all forests are created equal. A lot of the forests coming back are assisted plantations, and it is important to not delude ourselves into thinking that we don’t need to worry. It needs more attention and stewardship to ensure that the forests that are coming back increase in quality and not just in area. That requires a different kind of public policy.”

These research findings might show the way forward for industry and policy engagement with forestry. The shift to FDI in the service and manufacturing sectors as well as afforestation policies and activities are all closely related to forest cover increase in India. Already, organisations such as the Confederation of Indian Industry (CII) have set up sustainable forest management targets for industry and incubated the India Business and Biodiversity Initiative (IBBI) to nurture responsible forestry.

Policymakers can use the positive correlation between service/ manufacturing sector FDI inflows and forest transitions to further mainstream sustainable forest management initiatives across sectors. At the same time, policymakers should also pay attention to the principles of ecological stewardship and protect both quality and quantity. In this way, we can truly “see the forest for the trees”—or keep an eye on the big picture of sustained forest transitions while achieving economic growth.

Lingchao Li is Assistant Professor at the School of Economics and Management, Beijing Forestry University.

Jinlong Liu is affiliated with the Department of Forestry and Resource Economics at the Renmin University of China.

Baodong Cheng is Assistant Professor at the School of Economics and Management, Beijing Forestry University.

Jiayun Dong is at the Fujian Agriculture and Forestry University of Science and Technology, Fuzhou.

Wenyuan Liang is affiliated with the Department of Forestry and Resource Economics at Renmin University of China.

About the Research
Lingchao L, J Liu, B Cheng, A Chhatre, J Dong, and W Liang, 2017. “Effects of economic globalisation and trade on forest transitions: Evidence from 76 developing countries”, The Forestry Chronicle, 93 (2), 171-179.

About the Writer
Yogini Joglekar is an Editorial Consultant with the Centre for Learning and Management Practice at the Indian School of Business.

Tweets by @forbesindia
As far as the lens can see
Bagrry's: Cereal killer