Thriving with the crowd: Marketing with (and against) the New Influence Peddlers

Moving at the speed of the crowd has become mandatory for any company that is on the web (which is just about every company). These companies must understand how influence gets peddled in the marketplace today (and constantly refresh their understanding) – and they must constantly reevaluate how customers are influenced and what the appropriate response should be. Readers will learn what the responses should be in this article 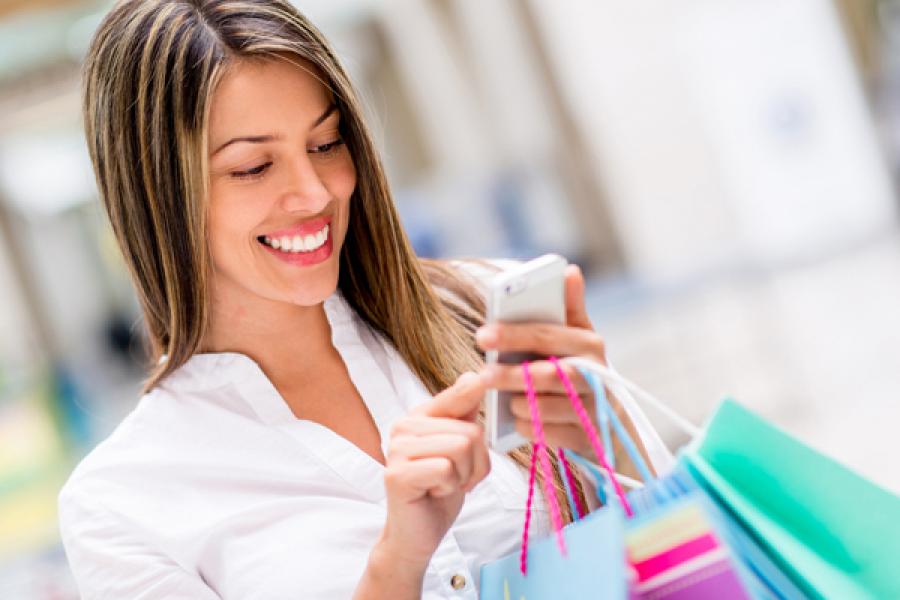 It’s not easy being a marketer in an age of crowdsourced opinions. A hotel chain, for example, might spend millions of dollars promoting a set of strong and consistent marketing messages—only to find them contradicted on a travel site like TripAdvisor. Or a high-end restaurant accustomed to touting its stellar Zagat ratings could be undermined by lukewarm reviews on crowd-sourced opinion site Yelp.

People have always sought information and advice from those they feel they can trust—friends and family, journalists or film critics, and publications like travel guides or consumer reports. Today, they have many more available sources. These new kinds of digital advisers and opinion aggregators, which compile independent and unfiltered reviews from users and consumers, operate beyond marketers’ control and have significant power to shape consumer opinion, behavior and spending.

This article will describe four approaches marketers can take to trump this new breed of advisers by turning the crowd into their friend.

The new landscape of influence
We have identified ten distinct sources of influence that can sway consumers. (See Figure 1.) Though some have been used for ages, four of the ten have only materialized as potent forces since the advent of Web 2.0. The new sources are enabled by social networks such as Facebook and Pinterest, opinion aggregators like Yelp and Rotten Tomatoes, automated recommendation engines such as those of Netflix and Pandora, and price-comparison services like Priceline and Google Shopping. Further, the six other sources of influence have been enhanced and democratized in the Internet age. 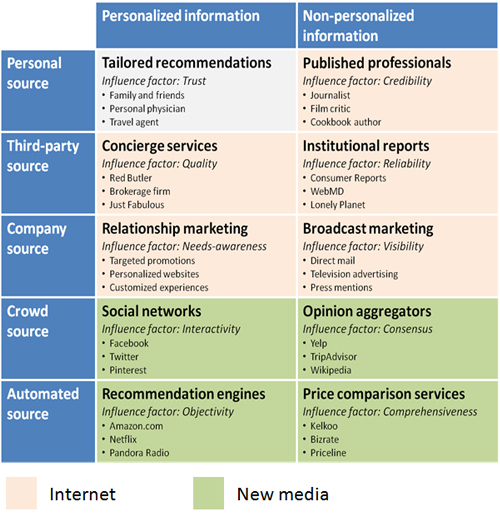 Together, these technology-enabled sources of influence, both new and old, increasingly intervene between a company and its customers. As a result, customers’ opinions about whom to trust for advice have changed. For example, the Edelman Trust Barometer, an annual survey of societal trust, found for the first time in 2006 that customers considered “a person like yourself” to be the most trusted source for advice, as opposed to other sources such as business or government.

Not only are attitudes regarding trust changing, but behaviors are as well. Consumers continue to escape from traditional marketing channels into digital realms, with several important outcomes. First, customers can now comprehensively inform themselves. Today, more than a fifth of consumers have used mobile phones to compare prices while in a store. Second, they can loudly inform others; nearly a third of consumers have penned negative online reviews after disappointing experiences. And, they can move toward purchase decisions at their own pace.

It’s hardly surprising that in a 2012 Accenture survey, 80 per cent of consumers reported that they were reevaluating their purchase choices more than they did just two years before. That’s bad news for marketing departments that rely on stable customer segments moving predictably along a linear path to purchase. What marketers need now is to regain their footing using new models for influencing customers at the right time, in the right place, with the right message.

An entire cottage industry of evangelists has developed in response to this challenge, with no end of their own opinions on effective Internet and social media marketing techniques. The challenge for companies is to identify and embrace the methods, both old and new, that are the most compelling to their customers, while responding effectively to competitors that are trying to do the same.

Companies must understand which sources of information consumers are turning to, and also which new sources could influence in the future.

Succeeding in the New Frontier
Some companies are ahead of the curve in understanding how their customers engage with alternative sources of influence – and through that knowledge they are pioneering new ways of using the crowd to their own marketing advantage. Companies in nearly every consumer-facing industry (and even some in business-to-business industries) must start by understanding the different ways that the Internet and new media have changed how customers find and absorb information about their company’s reputation and products. What’s most critical for companies at the outset is to take a comprehensive approach, one that considers all sources of influence.

Approach 1: Endorse the crowd
What happens in the crowd doesn’t have to stay in the crowd. Just like a local restaurant might display a poster advertising its five-star rating on Yelp, companies in every consumer-facing industry can mine what’s being said to find new ways to advertise their products and brands. Bringing the “voice of the crowd” into marketing efforts can lend a campaign the type of credibility and authenticity that consumers often look for from their peers.

Disney, for example, in advertising its 2009 animated blockbuster Up, touted the Pixar film’s 98 per cent “fresh” score on RottenTomatoes.com – an online movie opinion aggregator – in addition to the more traditional blurbs from expert film reviewers. The LA Times called this “an unusual endorsement.” But according to Disney’s marketing chief, “People want to know what the consensus is. I am a huge believer that in today’s culture, people don’t pay as much attention to individual voices as they do to the aggregate score.” Up performed stronger than analysts had been expecting, ranking number one on its opening weekend and going on to be one of Pixar’s highest grossing films.

Approach 2: Venture among the crowd
Many companies are increasingly finding that it pays to meet customers where they’re most likely to engage in direct conversations: in forums like Twitter and Facebook. If done right, the benefits can outweigh the risks of customer complaints being aired publicly.

Malta-based Corinthia Hotels, with properties in Europe and Africa, is one company that responds directly to customer feedback over social media. According to the company’s social media strategist, “It can seem quite risky for a hotel group to put customer service on social media platforms and public websites, but we’re willing to take that risk. The reality of the social web is that whether we engage or not, the conversations about our brand are happening anyway.” The company finds that engaging through social media highlights the hotel chain’s transparency and builds trust with consumers – a major factor when it comes to hotel bookings.

Approach 3: Listen to and learn from the crowd
Just listening to the crowd can help a company become more relevant to its customers – without the risk of saying the wrong thing.

Kraft Foods in particular adapts its products to reflect trends in food-related social media discussions. An executive at the Oscar Mayer division notes that social media research “allows us to explore the fuzzy front end of basic user wants or needs, like what are the flavor trends, what are the usage trends.” Although similar to the kind of ethnographic research that some marketers employ, listening to and monitoring these alternate sources of information provides the company with “a vast data set, bigger than any data set I ever had, and it’s being refreshed constantly.”

Approach 4: Invite the crowd inside
Some companies with cash to spend have started advancing a new strategy — one we call “advice consolidation.” This approach recognizes that consumers are drawn to different sources of advice for different reasons and at different times, and that the best way to keep customers engaged is to offer a diverse portfolio of guidance – often by giving the crowd a useful forum in which to hold their own conversations.

WebMD, long known for its informative articles on symptoms, treatments, and other health-related matters, decided in 2010 to give its readers another source of advice: active communities of peers who are looking to find or share information about particular health issues. The result of this effort was WebMD Exchange, where registered users can join expert-led communities, or alternatively create their own public or private support group. Through the communities, members can share their experiences, discuss their personal challenges and receive direct answers in close to real-time.

Why did WebMD venture into peer communities? Because, as then-executive vice president of consumer services Nan Forte explained, what readers sought beyond the site’s vast collection of articles was “specificity, and finding people like me. People who are starting their own [communities] are very specific: cancer patient who has heart disease and is a single mom. That becomes a community.” The personalized support and ongoing interactions on offer in the communities strongly contrast with the longer expert articles that are the mainstay of the site. And yet, the two types of advice complement each other, and WebMD has integrated links to its public communities throughout the site’s core content areas.

Avoiding complacency
No matter which approach a company takes, it needs to remain vigilant. Alternative sources of consumer influence are constantly moving targets, and the pace of innovation means that consumers can be influenced differently month to month, week to week and even minute to minute.

The costs of an ill-conceived approach can be tremendous. Consider the numerous high-profile missteps – and stories that often go viral. In one case, several well-known consumer goods manufacturers were exposed for flooding review sites with glowing praise for their own products. In another, online retailers were embarrassed when it turned out that a social networking site, used by the retailers, was automatically sharing users’ purchases with their network, without the consumers’ consent. A popular fast-food chain realized how little it knew when it introduced a new hashtag on Twitter – hoping that customers would share fond memories of the restaurant. Instead, a torrent of negative and unflattering responses was unleashed.

Companies must therefore not only continuously re-learn how influence gets peddled in the marketplace today – they must also constantly reevaluate how customers are influenced and what the appropriate response should be. For marketing departments, this means nothing less than moving at the speed of the crowd.