Large and small teams produce different types of breakthroughs, according to an analysis of 50 million patents, software products, and academic papers 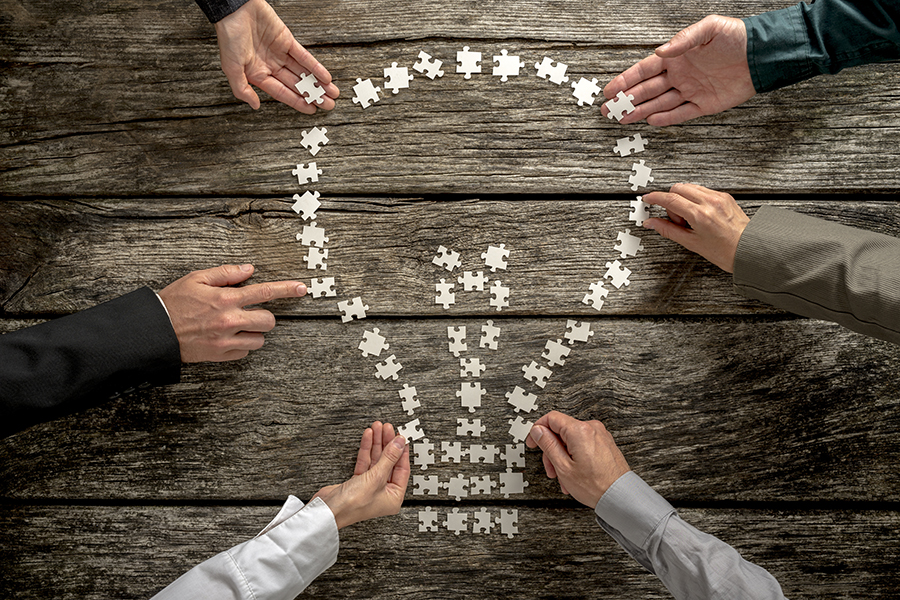 
The Nobel Prize–winning paper that announced the discovery of gravitational waves has a peculiar sort of appendix: nearly three pages of small print, alphabetically listing the names of the paper’s more than 1,000 coauthors.

That paper, from 2016, is a fine example of a well-documented shift taking place across science and technology—research teams are becoming larger, while solo and small-team projects are becoming rarer.

No doubt, those larger teams are producing important work, says Dashun Wang, an associate professor of management and organizations at Kellogg. Increasingly, “breakthroughs seem to emerge from teams instead of solo authors,” he explains.

Yet Wang was hesitant to conclude that huge gaggles of researchers simply produce better work, as measured by the number of citations a paper receives. After all, that groundbreaking physics paper on gravitational waves has its earliest roots in the theory of general relativity, first proposed in 1915. “How many authors were on that paper?” Wang asks. “Just one—Einstein himself.”

Which led Wang to wonder: Did large teams garner more citations because they were producing a different type of work than small teams?

In a new paper with coauthors Lingfei Wu and James Evans, both of the University of Chicago, Wang analyzes the citation patterns of 50 million papers, patents, and software products developed between 1954 and 2014. The researchers find that large-team projects indeed garner more citations, and accumulate them faster. But these large teams primarily develop upon existing research, rather than proposing new directions. Meanwhile, small teams tend to forge entirely new paths of discovery.

At a time when research teams are growing larger, Wang says this conclusion demonstrates the importance of continuing to support solo authors, duos, and trios. “Otherwise, there’s not going to be the small teams that give you the disruptive idea for large teams to develop.”

“That seems to suggest to us that, at the very least, there seem to be two kinds of works,” explains Wang.

What he calls “development” projects are those that flesh out or build upon earlier research—since they seek to advance understanding of an existing question or problem, they tend to be cited along with earlier research. “Disruption” projects, on the other hand, are those that establish a brand new frontier of inquiry. As such, they are more likely to be cited alone, since they depart from what came before.

“So then the question becomes, ‘Is it a large team or a small team that creates the work with more disruption?’” Wang says.

To find out, the researchers obtained data on 43 million scientific papers (with some 615 million citations) from the Web of Science database, as well as decades of U.S. patent filings, and millions of projects uploaded to software platform Github.

They mapped the network of connections among the millions of projects and their citations. This allowed the researchers to determine how developmental or disruptive each project was, and then analyze what size of team more frequently produced which kind of work.

While large teams receive more citations overall, one- or two-person teams produce work that is much more disruptive.

“The large teams garner more impact, but it is the small teams that are systematically more disruptive,” Wang says.

These findings contradict the widely held idea that large teams should be better equipped to take research in new directions because they bring more brainpower and diverse perspectives to the table.

But Wang sees some logic behind the counterintuitive finding, pointing out that new, groundbreaking research often comes with the risk that the project will fail. In order to take a project in such a risky direction, every member of the team must be onboard—which becomes more difficult as a team gets larger.

“It actually would be very hard to do it with a 100-person team, because how are you ever going to create that level of consensus?” he says. “The only way it seems that can happen is if a small number of people come together—one, or two, or three.”

Similarly, he can understand why development projects often require huge teams. For example, although Einstein had theorized gravitational waves a century earlier, the project to actually prove their existence was a massive undertaking. Physicists built two enormous, technologically sophisticated observatories, and spent a decade trying to detect the waves before they finally succeeded.

The process required huge quantities of expertise, manpower, and lobbying muscle to procure funding. “There’s no way for you to achieve that with a small team,” Wang says.

This finding is consistent with research on teamwork in the private sector, he says. Management experts have observed that small, agile teams are more likely to develop a novel or experimental idea. “Then, if it actually works, you can expand it to the entire company,” says Wang.

The researchers performed additional analyses to confirm that their result was truly a function of team size. They looked at the relationship between disruptiveness and scientific field (i.e., physics, biology, computer science) as well as research type (i.e., experiment, theory, patent). No other factor explained the disruptiveness of a research paper as well as the size of the team that produced it.
Speed of Citations for Small vs. Large Teams

The researchers also analyzed the timing of large- versus small-team paper citations, finding that large teams tend to receive most of their citations immediately, while small teams see a longer delay before citations peak—a sign that the transformative potential of disruptive work is often not recognized right away.

That slow burn might be part of the reason why small teams often struggle to obtain funding. In their paper, the researchers look briefly at the financial backing for projects. They find that major government funders, such as the U.S. National Science Foundation and its analogs in Europe and Asia, tend to favor less disruptive, larger-team research. Meanwhile, smaller, more disruptive projects are disproportionately likely to go unfunded.

While Wang—a physicist by training—admires the gravitational-waves project and other critical developmental research, he says that his findings underscore the importance of also funding smaller teams, which he calls “brave and broke.”

“If you only keep funding the 1,000-person teams, there could be [no new ideas] for you to realize at some point,” he says.

Furthermore, Wang believes that the paper adds some nuance to the idea that important research only comes from large teams. “It’s more complex than that,” he says. “Are you talking about new ideas or about ideas that are going to get more attention?”

Tweets by @forbesindia
Atmanirbhar is the call of the day: K V Kamath
Podcast: Inside Harindarpal 'Harry' Banga's Second Act