As the car industry prepares for new regulations, Maruti Suzuki gets on the fast track with its Rohtak R&D facility 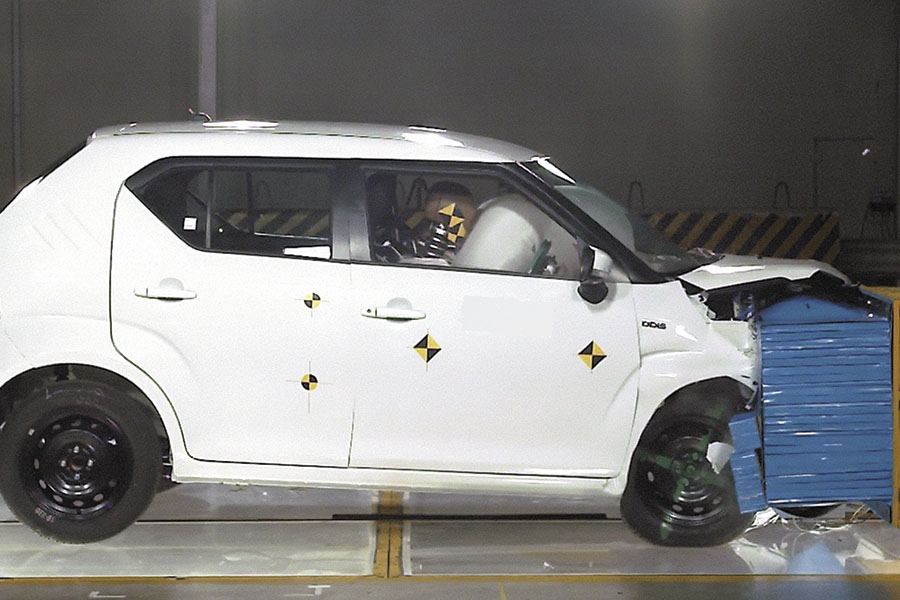 
“All doors locked. Vehicle check completed. Vehicle in neutral. Hand brake down. Data acquisition systems and cameras armed. Soak room shutter opened. Drive system is a go.” The engineer in the control room at Maruti Suzuki’s Crash Safety Lab, located at its R&D Centre at Rohtak, Haryana, runs through the checklist and within seconds a white Maruti Suzuki Ignis, with two dummies (each with 40 sensors on them), speeds along a 130-metre stretch inside the lab at 56.44 kmph, crashing into the offset block fixed to a 90-tonne concrete barrier with a deafening noise.

On impact, the rear wheels lift, the safety bags are deployed and the vehicle is thrown to the left. The front bumper is destroyed and part of the bonnet on the driver’s side crumples. A closer look reveals that the passenger compartment is intact, the windshield has not cracked, there has been no fuel leak and the doors are not damaged. Maruti Suzuki’s newest baby Ignis has just cleared the frontal offset test as specified under AIS 098 regulations.

The test assumes significance in view of the new safety norms that will soon come into effect in India. The full frontal, frontal offset and side impact crash tests will be mandatory for new cars from this October, and pedestrian safety tests from October 2018. Existing models will have to meet these regulations from October 2019 (for crash test) and October 2020 (for pedestrian safety norms) onwards. Maruti Suzuki, the market leader in India, is well on its way to meeting these norms. “Ciaz, Baleno, S-Cross, Ertiga and Ignis already meet the proposed regulations,” says CV Raman, executive director (engineering), Maruti Suzuki. “Our other cars will be re-engineered well in time.”

The company’s Rohtak facility, spread over 700 acres with 33 types of test tracks spanning 31 km, and laboratories to test safety, emission, engine control, brakes, transmission, etc, is the key and will give it a competitive advantage against other carmakers in India. “This is the first such facility that Suzuki has outside Japan,” said Raman, while showcasing the facility to a group of journalists recently. The company has so far spent Rs 1,900 crore on the centre and plans to invest a similar amount by 2019.

The facilities in Rohtak will ensure the carmaker has end-to-end product development capability (including testing), thereby reducing the lead time to the market. Earlier, cars were sent to Japan for testing and validation, which took time as the R&D facility there handles multiple geographies.

It will also help the company refine its cars to Indian conditions, enable it to meet new regulations, and benchmark to competition. Maruti Suzuki, which till a few years ago was not seen as an agile player, has introduced a series of new cars as part of its plan to launch 15 new models between 2015 and 2020. With the Rohtak facility in place, the pace of new launches is only set to increase.


(The writer was in Rohtak at the invitation of Maruti Suzuki)

Tweets by @forbes_india
Priyanka Chopra : Breaking the mould
Lockheed Martin will soldier on despite Trump's tweets