The woman behind the second largest tractor maker in the country intends to transform India’s village landscape, and the way small farmers work 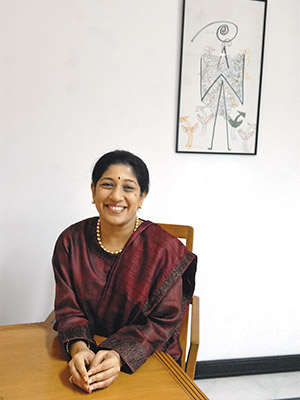 Award: Woman Leader for the Year
Name: Mallika Srinivasan, Chairman, Tafe
Age: 53
Why She Won: For designing and developing farm equipment relevant to Indian farmers. And for building Tafe into the second largest tractor maker in India.


The shelves in Mallika Srinivasan’s office are empty save for an idol of lord Venkateswara. Her table is bare, clean and small. The joke at Tractor and Farm Equipment (Tafe) is that as the company gets bigger, its chairman’s table gets smaller. There is a circular table closer to the door—it’s even smaller. There are a couple of large catalogues on the table. In them, over page after page, photographs and specifications of farm equipments are spread. In their size and sophistication, they seem to have jumped out of Transformers or Real Steel. They can perform a range of operations: Plough land with their giant arms, pluck fruits, harvest grain, and plant saplings with speed and accuracy.

Even four or five years ago, these catalogues would have been science fiction in the context of Indian agriculture. But there have been big changes. Urban migration, employment guarantee schemes, and low productivity have shattered assumptions about cheap labour, and have left agriculturists scrambling for helping hands. The shortage won’t go away—for the simple reason that the employment-to-GDP ratio in agriculture is too skewed to sustain. Mechanisation is the only way, and it’s tempting to think that the catalogues are shopping lists—to buy and resell.

They are not. None of these will work in India. “We cannot import technology from the West and hope it will work here. Farm sizes are small. Farming practices are different,” Mallika says.

So, what’s the way ahead? This is the problem Mallika has been trying to solve for the last several months. Her solution might change the way small farmers work, and even the manner in which a typical village landscape looks. For years, women bending forward and working in lush green fields defined the scene.

If Tafe succeeds, it could be defined by its people-oriented machinery. It will launch its first set of farm equipment specially designed and developed for Indian farm conditions in the next few months. They will be smaller—better to navigate small farms with (over 60 percent of farms in India are less than a hectare). They will be in line with what the Indian farmer wants. And, of course, they will be cost effective.

This new journey is changing Tafe, the company Mallika’s grandfather founded in 1960, when the government dictated the number of tractors a company could make. Tafe’s quota was 7,000 a year.

Today, Tafe makes that many in 15 days. It has a 25 percent market share, and is the second largest tractor maker after Mahindra & Mahindra. Its growth last year was especially good. Its tractor sales grew 26.6 percent, more than twice the industry growth rate. In fact, in the last five months, when the sector barely grew (growth was less than 1 percent), Tafe grew at over 28 percent. “Our performance surprised everyone, and I must say even we were surprised,” said RC Banka, deputy CEO, Tafe.

One of the reasons why it did well was the roll out of new products. A few years ago, when the market slowed down, Mallika initiated a cost-cutting exercise, but left one area untouched—research and development. When the market recovered, Tafe had new products to launch, which kept the growth going. Over two-thirds of the growth in the last three years has come from new products.

A bigger reason for Tafe’s success is what Mallika did in 2005. She led its acquisition of Eicher’s tractor business. It gave Tafe an entry into low horsepower tractors, and also in markets where it didn’t have a footprint. At that time, it was considered risky. The market was bad and sales across the industry were dropping. Tafe hadn’t done a big acquisition till then. But, it turned out to be a smart move.

Exports also helped. It accounts for about a seventh of Tafe’s revenues and it grew by 28 percent last year. Mallika said exports are a key part of her strategy, and two years ago, she set up a manufacturing plant in Turkey to tap the local market, and also to supply to Africa eventually. It has strengthened its tie-up with Agco Corp, a Georgia-based farm equipments maker, for distribution in the US. Agco has a 23 percent stake in the company, and Mallika has been on the Agco board since last year.

Tafe’s target is to touch 2 lakh tractors a year in three years, from 1.48 lakh now. But, Mallika’s revenue ambitions are even bigger—to make Tafe a $5 billion company in three to five years. And that’s where the farm mechanisation project fits in. She reckons that the market size, even on a conservative estimate, is $1 billion.

For the new range of products, Mallika laid out two broad principles. One, they should be cost-effective, and two, they should be relevant to farmers. To achieve that, the inputs should come from farmers themselves. Mallika, whom her colleagues describe as someone with a natural instinct for marketing, has inordinate respect for the views of the end-users, and spares no expense for a chance to listen to them. On her trips to rural areas, she always makes it a point to stop at tea shops and get into conversations with people. A Business Line story says: Every morning she gets a stream of text messages from distributors on rainfall in their respective areas. “They say the devil is in the detail, but God is in the detail too,” she said.

Recently, she set up two centres of excellence—one for technology and the other for marketing. Banka says Tafe is in the process of hiring about 100 people in technology and about 50 in manufacturing. They come from a range of backgrounds—from mechanical engineering to electronics and energy—and will work on designing and developing products that would suit the smaller farm size and farming practices here.

Similarly, the second group will look at ways to improve manufacturing practices. This will get more relevant for Tafe for two reasons. First, its own factories will start making a wider range of products, and two, not all products will be made in-house. Banka says, for some of these products, Tafe would build prototypes, demonstrate manufacturing at one of its factories, and tie up with regional players to make the products for the market. Earlier this year, Tafe tied up Captain Tractors, a Gujarat-based company that makes low horsepower tractors and equipment that can go with it. There will be more such tie-ups.

Mallika is also moving the organisation towards a matrix structure. The earlier hierarchical structure worked when one product dominated its portfolio. However, there is a need to be fast and flexible. The most commonly heard phrase in the company’s corridors is ‘cross-functional’. Now, a manager looking at logistics will be in charge of all products across geographies. A manager from production might be invited to marketing meetings.

When Mallika returned to India after getting an MBA from Wharton in 1986, she wanted to join one of the smaller companies in the Amalgamations Group. However, her father, A Sivasailam, asked her to join Tafe, its flagship. He felt she would get a bigger canvas at Tafe and learn a lot. That turned out to be true. In the mid-1980s, the tractor industry was undergoing a change. Till then, the supply, constrained by the Licence Raj, lagged demand, and selling simply meant asking distributors to wait. But, around the time she joined, those shackles were gone and the era of marketing—understanding the customer, feeling the pulse, spotting the trends, and making sure your products are relevant—had dawned.

It was a challenge, but it was also a big opportunity. Tafe’s revenues were Rs 85 crore then. Today, it stands at Rs 8,020 crore.

It’s tempting to say that the scale of both challenge and opportunity is no different today, even if it comes in the form of farm mechanisation. But in Mallika’s personal equation, there is one big change: The death of her father. A Sivasailam was not only a big influence, like many parents are to their children, he was also a constant guide and mentor to Mallika, long after she had established herself as the ‘Tractor Queen’. No big decision was taken without his guidance or approval. He passed away early last year, while on a pilgrimage to Sringeri. He was 77.

Her colleagues say she has made the transition well, taking on the additional responsibility (from her father, as well as her younger sister, who died a few months later) and taking big decisions without the comfort of her father’s guidance. It’s partly because of her uncanny ability to work with professionals.

There has hardly been any attrition in her senior team. When Tafe acquired Eicher, many believed the senior managers would leave. That did not happen—her colleagues say, thanks mainly to her approach.

It’s an approach that’s defined by optimism and ambition, a common trait among entrepreneurs. But it’s also defined by an insatiable hunger for knowledge, as if she is still a student at Wharton preparing for the next day’s class.

Banka says she attends meetings well-prepared, with a lot of notes, and questions that tend to get into the nitty-gritty of every issue. Once, she was sent some documents late at night that would have left her with hardly any time to prepare. Yet, the next day, for an early morning meeting, she was there with elaborate notes and in-depth questions.

PB Sampath, a director at Tafe and an Amalgamations Group veteran who has worked with her father, says, some years ago, during a discussion the topic turned to a minor change in an Act related to accounting. Mallika wanted to know about how Tafe would respond. Sampath said his team will take care of it. But Mallika wasn’t worried about that; she was confident they would. She asked about it because she wanted to learn.

There’s one story that Mallika likes to narrate when asked about the most important lesson she learnt from her father. On returning from Wharton, her father gave her a small room at the Tafe office. It was part of a corridor that had been converted into a cabin, and didn’t have a window. The pay was bad. She went to her father, and said that her Wharton classmates were much better off. He replied: “Listen young lady, you might be an MBA from Wharton, but I don’t need one to run the company.”