Blue Java: How blue food is making its way onto the menu 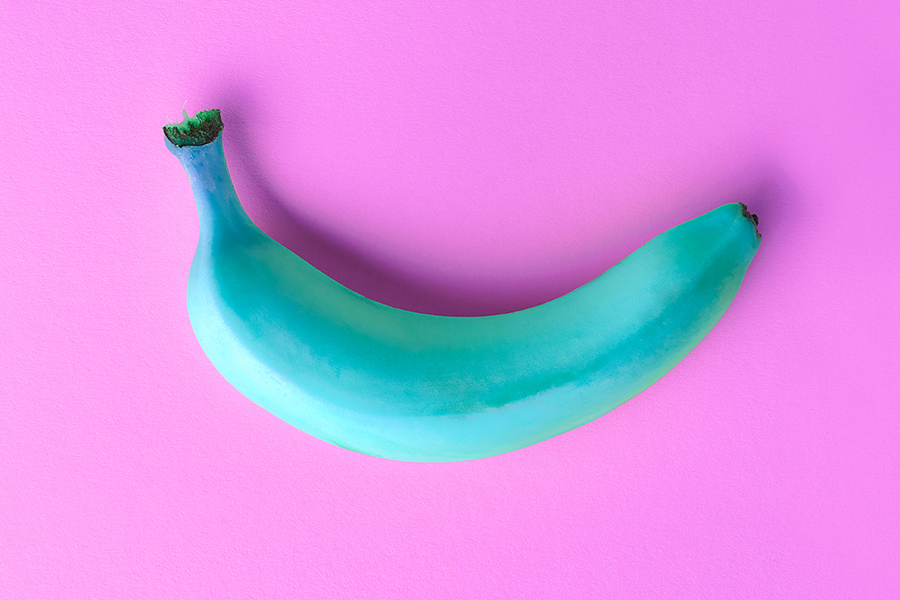 Blue Java: The most-hyped food of the moment
Image: Sutterstock

With climate change on the agenda, is it time we embraced the blue banana? You may not know it, but this fruit can also come in a striking bubble-gum shade. And it's completely natural! This variety grows in Asia and Fiji, on humid and sunny land. It's even able to resist the cold, which certainly isn't the case with our usual yellow bananas. And, what's more, this blue variety has a surprisingly delicious vanilla-like taste.
It's the most-hyped food of the moment! Its name: Blue Java. And it could well be a timely trend in light of COP26, where 80 countries have already committed to reducing methane emissions by 30% by 2030. Because this blue banana is much better able to resist cold spells than the varieties we are used to, namely Musa acuminata and Musa balbisiana. Blue banana trees can withstand negative temperatures of up to -7°C, whereas yellow bananas are usually only grown in tropical environments. The hardy Blue Java can be found at altitudes of up to 1,800 meters and is grown in Fiji, the Philippines and in Southeast Asia.

And with the effects of climate change, you could almost imagine this variety of blue banana being grown in other parts of the planet. In fact, the blue banana is already a subject of great interest -- so much so that seeds are available on the internet via Amazon or online garden centers. On social media too, people are raving about this banana variety and its signature color that's as appealing as it is intriguing.
But the Blue Java banana isn't just surprising for its color. Its taste is also distinctly different, with a vanilla-like flavor. In fact, in Hawaii, where it also grows, people took to calling it the "ice cream banana."

Blue is the new black

So is blue making its way onto our plates? Blueberries and Merlot grapes aside, the color can seem unusual in the food world. However, it's actually not as rare as you might think. Take tomatoes, for example. You can now even grow a blue variety in your garden if the weather conditions are humid and don't exceed 25°C. Small in size and reminiscent of the cocktail variety, this tomato, named OSU Blue, was created in the early 2000s by an American research institute.
Then there's the purple apple-berry, a vine native to the forests of Australia and Tasmania. The plant's flowers take a tubular shape, giving rise to purplish-blue fruits. When ripe, their texture is reminiscent of eggplant, while the taste is close to that of an apple.
Vanilla also comes in a "blue" variety, although it isn't actually blue in color. This type of vanilla, from Reunion Island, is an object of desire for many great chefs (and it costs around €1,150 per kilo), and benefits from a long maturation period. The Escale Bleue brand -- the only supplier -- even extends maturation to six years for a limited edition version. And its subtle flavor isn't its only asset, as blue vanilla is entirely edible! And if you're wondering why it's called "blue" vanilla, it's because, in the past, the people of Reunion Island said a plant was "blue" if it was in good health.

Tweets by @forbesindia
Augmented reality: An early taste of the metaverse
For Stella McCartney, fashion must ditch leather or die trying