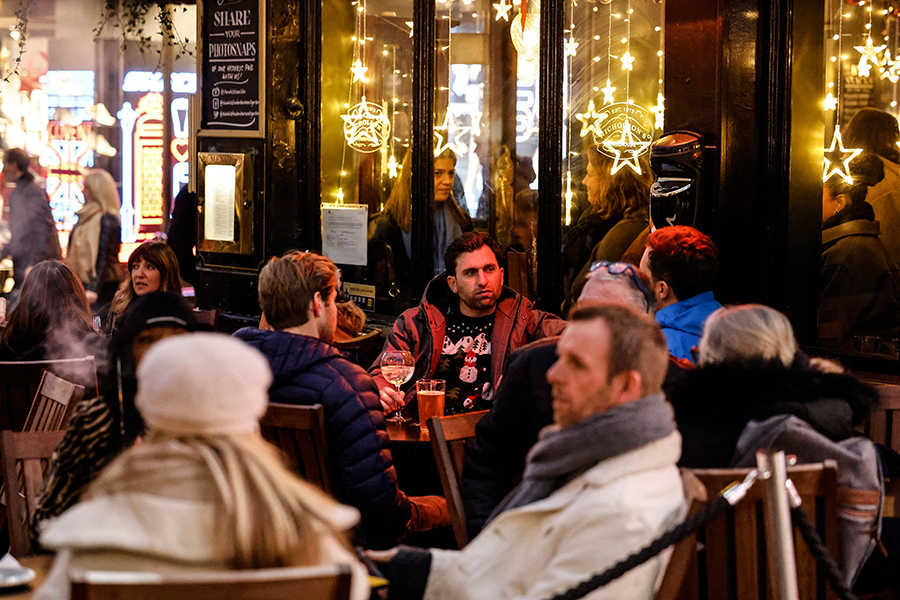 Customers enjoy drinks outside a pub in Covent Garden on the last Saturday for shopping before Christmas, in central London on December 18, 2021. - The British government on Friday reported 93,045 new coronavirus cases, a third consecutive record daily tally, as the Omicron variant fuels a surge in infections across the country. Britain is currently rolling out a mass booster drive in order to vaccinate as many people as possible before the end of the year. (Photo by Tolga Akmen / AFP via Getty Images)

Efforts in Europe to encourage vaccine use through certificates proving vaccination, a negative test result or evidence of having had Covid have created a mountain of regulation.

Here are some of the more puzzling rules as Europeans settle for another winter holiday season overshadowed by the pandemic threat:

Vaccine passes have become compulsory for a variety of public events across Europe. In the Czech Republic, the regulation has been extended to pig slaughters—a pre-Christmas tradition in which a butcher comes to people's homes to provide meat for holiday season delicacies.

The regulation states that vaccine passes are now required to participate in these "pig slaughter parties" and up to 1,000 people can attend the events, which usually have only a few family members present.

Space for dancing in England

In England, vaccine passes are now required in nightclubs and pubs with dance floors or "space for dancing".

The requirement in pubs only applies from 1:00am, however, meaning that revellers can go to the venue before that time so as not to be asked for a pass by bouncers.

Entertainment venue owners have baulked at the prospect of asking staff to make their way across dance floors to check passes after the 1:00am threshold.

Attending Christmas services in Greek churches has become something of a conundrum. The government in November decreed that the unvaccinated had to produce a rapid test or proof of vaccination to be able to go to church.

The governing body of the Orthodox Church of Greece, where many clergymen have expressed sceptical views about vaccines, has said it is not in a position to conduct checks at the entrance of churches.

Elected officials are temporarily suspended from their duties if they do not have the vaccine certificate in Latvia.

So far, 19 municipal councillors have been suspended across the country.

Under the new rules, their seats are temporarily given to the runner-up in the elections that originally brought them to power.

One member of the national parliament, Julija Stepanenko, co-founder of the Latvia First! party, has also been suspended.

Going to a petrol station in Lithuania requires a Covid pass.

The rule had previously been that people without Covid passes could go into petrol stations but only for less than 15 minutes.

In any case, anyone without one can still fill up their car when it is possible to pay by card outdoors.

People without certificates in Lithuania are also not allowed to go to large shopping centres, gyms or spas. They are not allowed to enter restaurants but can purchase takeaways or use outdoor seating—an unlikely prospect as temperatures drop as low as minus 10 degrees Celsius in the capital Vilnius.