"Little Falconers" have gathered in a tent ahead of the football World Cup in the gas-rich Gulf emirate, in a bid to introduce visitors to a practice inherited from their forefathers 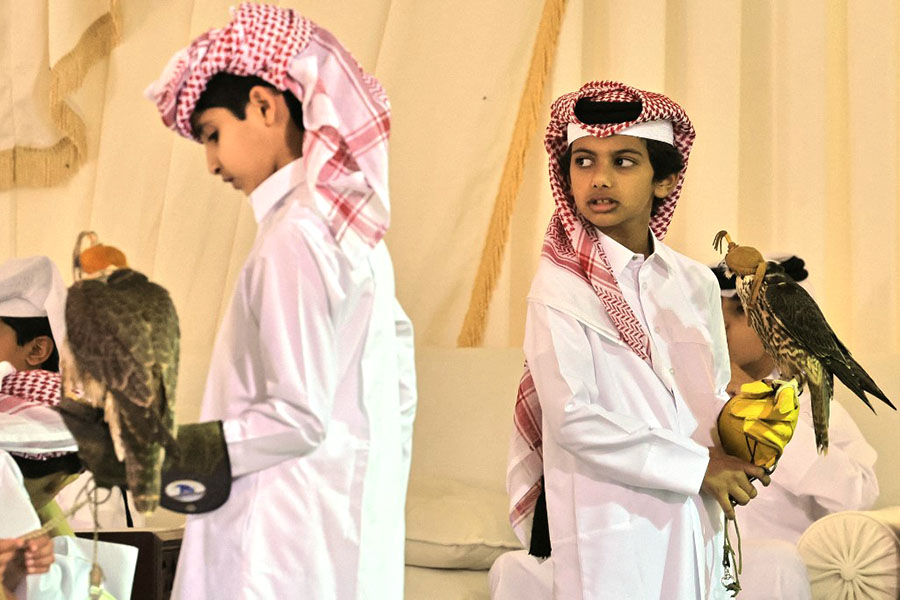 The little falconers are tested on their ability to properly remove the birds' hoods, then to successfully place them from their arm to a perch, securing their feet using a special knot. Image: Karim Jafar / AFP

In the deserts of northern Qatar, children with a falcon perched on gloves on their left arms show off their hunting birds in a bid to preserve an age-old tradition.

These "Little Falconers" have gathered in a tent ahead of the football World Cup in the gas-rich Gulf emirate, in a bid to introduce visitors to a practice inherited from their forefathers.

"This is my first participation in the competition," says 11-year-old Breik al-Marri, dressed in flowing white robes beside his falcon Gasham, a leather hood obstructing the bird's view.

"I love Gasham and I take care of him," Marri said, sliding his left arm into a thick leather gauntlet to protect him from the raptor's sharp talons.

Falconry was added to the UNESCO list of intangible cultural heritage in 2010, in countries including Qatar, Saudi Arabia and the United Arab Emirates.

"Originally a means of obtaining food, falconry... has been integrated into communities as a social and recreational practice and as a way of connecting with nature," the culture agency said.

"I learned this sport from my grandfathers, father and uncles," said Marri. "I learned from them the strength of determination and how to take care of the falcon."

Marri explains that the hood helps keep the bird of prey calm. As soon as the falcon regains sight, he says, the behaviour changes.

"Once, my brother came while the falcon didn't have the hood on, and he tried to pet the bird, but the falcon bit him," he said. "The falcon was scared!"

Marri recently participated with a dozen others in the "Promising Falconers" contest for 11-15 year olds.

The contest sees each young falconer choose the perfect moment to release their bird in order to snatch their prey, a lure waved about 200 metres (about 650 feet) away.

The winner of the contest is the falconer whose bird captures the prey the quickest.

Also taking part in the contest was 15-year-old Saeed al-Jamila, who named his falcon Hayya—after the special fan passes for the FIFA World Cup, which runs from November 20 to December 18.

Expressing excitement at the more than one million fans expected to descend on his small nation for the tournament, he hopes to send a message encouraging them to try falconry themselves.

"They should try it, they won't lose anything," he said. "It's a beautiful sport."

But while excitement abounded for the young falconers in this division, it was undoubtedly the "Little Falconers" aged six to 10 who stole the show.

One by one, they trailed out in a row, each holding a hunting bag, while on their right arm they balanced the birds whose claws were bigger than the children's hands.

Eight-year-old Hamad al-Nuaimi stepped out in front of the panel of judges, who began questioning on hunting tools, their uses and properties.

At one point, Nuaimi stumbled for a response to one of the questions, only to be helped along by one of the judges.

The purpose of the contest is to "preserve our heritage and that of our forefathers. We are passing this heritage to this generation," says panel member Saad al-Muhannadi.

The little falconers are then tested on their ability to properly remove the birds' hoods, then to successfully place them from their arm to a perch, securing their feet using a special knot.

"Hunting teaches a man perseverance and self-reliance," said Muhannadi, as the strong scent of coffee wafted from nearby.

He hoped that the hosting of the World Cup would grant Qatar the opportunity to "spread our culture and national identity".

Falconry "is an ancient sport, whether in Qatar or other Gulf countries, it is an authentic sport," he said.