Of its 1,154 World Heritage sites, UNESCO believes one in five sites, and more than a third of natural sites, already see the consequences of climate disruption and the loss of biodiversity threat as a reality 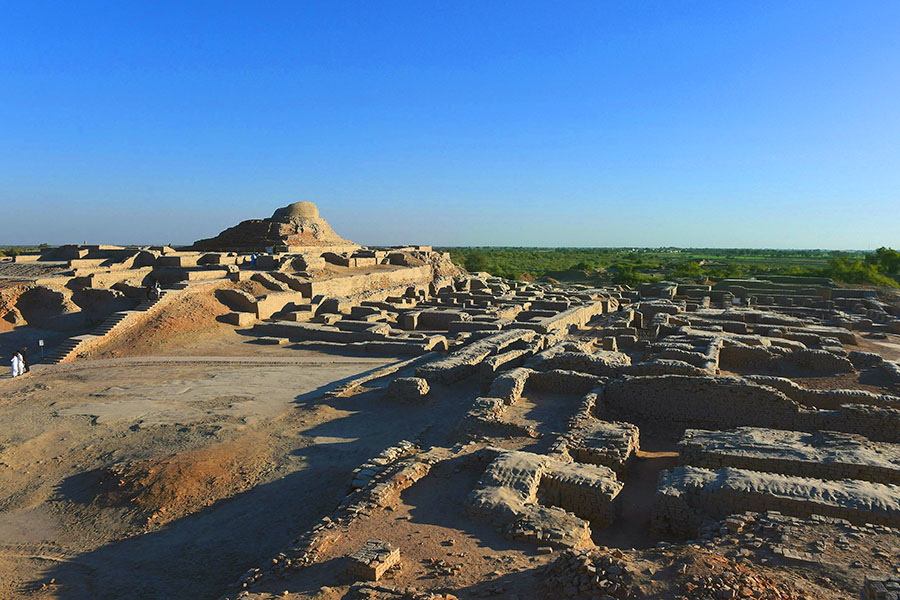 One of the world's first cities came close to being wiped off the map during tragic floods this summer in Pakistan. Though Mohenjo Daro survived, it has become a symbol of the threat global warming poses to humanity's cultural heritage.

Built in around 3000 BC by the Indus civilisation in modern-day South Asia, Mohenjo Daro was not swept away by the floods, most likely thanks to the genius of its designers.

Perched high above the Indus river, the city was equipped with a primitive drainage system and sewers, meaning much of the floodwaters could be evacuated.

Nearly 1,600 Pakistanis died in the floods and 33 million others were affected in a disaster "probably" made worse by global warming, according to World Weather Attribution, a network of researchers.

The ancient metropolis "could have disappeared with all the archaeological traces" it contains, said Lazare Eloundou Assamo, the director of the World Heritage programme at UN agency UNESCO.

The Pakistani site was "a victim" of climate change and was "very lucky" to still be around, exactly 100 years since it was first discovered in 1922, Assamo said.

Fortunately, "the situation is not catastrophic" in Mohenjo Daro, said Thierry Joffroy, a specialist in brick architecture who visited the site on behalf of UNESCO.

Despite ground sinking in some areas and water damage to some structures, the site "can be repaired," Joffroy said.

For 50 years, Paris-based UNESCO has compiled a list of World Heritage sites, significant places that are deemed worthy of protection, and is marking the milestone this week in Greece.

"To protect this heritage ourselves... is to confront the consequences of climate disruption and the loss of biodiversity. It's the main threat... that we assess in a tangible way," UNESCO director Audrey Azoulay told the conference in Delphi on Thursday.

Of its 1,154 World Heritage sites, "one site in five, and more than a third of natural sites, already see this threat as a reality," she said.

"We are experiencing many more incidents of floods, hurricanes, cyclones, typhoons," said Rohit Jigyasu of the International Center for the Study of the Conservation and Restoration of Cultural Property (ICCROM).

"We have these climate-related disasters, which are having a huge impact on sites, for example Mohenjo Daro," he said.

Huge forest fires have scorched the Rocky Mountains in Canada, which are a world heritage site, and this year flames came within 15 kilometres (nine miles) of Delphi as heatwave intensify the severity of wildfires across the Mediterranean basin.

Also read: Yellowstone, Kilimanjaro glaciers among those set to vanish by 2050: UNESCO

In Peru, meanwhile, landslides occurred this year at the foot of Machu Picchu in the Andes mountains.

Other less noticeable changes can also have serious consequences.

In Australia, the protected Great Barrier Reef is experiencing bleaching episodes due to rising water temperatures.

In Ghana, erosion has washed away part of Fort Prinzenstein, which is conserved as a notable slave trading post.

"Slow factors" that do not have an immediate impact pose "new kinds of risks in many of these sites," Jigyasu said.

These include invasions of wood-eating termites in areas that were previously either too dry or too cold for the insects to thrive.

In other countries, the drying out of soil due to declining rainfall can have a "destabilising" effect on some heritage sites, said Aline Magnien, director of the French state-funded  Laboratory for Research on Historical Monuments.

Under drought conditions, "the soils contract and... make the foundations move", then "swell suddenly when it rains", which causes cracking, she said.

When parched and hard, they absorb less water, which promotes flooding.

"It's not just the heritage that is affected when you lose part of it, but all the social system around it," added Bourges, who is also secretary general of the International Council of Monuments and Sites (Icomos), an NGO.

In Mongolia, archaeological sites have been abandoned then looted because "the population no longer had access to water", Jigyasu added.

Expected water shortages in the future could also lead to an increase of conflicts in which important heritage sites might be lost.

Tweets by @forbesindia
'Help employees when they are struggling, motivate them, coach them along': CavinKare's CK Ranganathan
Falconers hope to draw World Cup fans to Qatar heritage