What hip-hop architecture is all about: questioning the city and the validity of its design. Hip-hop catalyzes the architectural design process, infusing it with spontaneity, history and universality 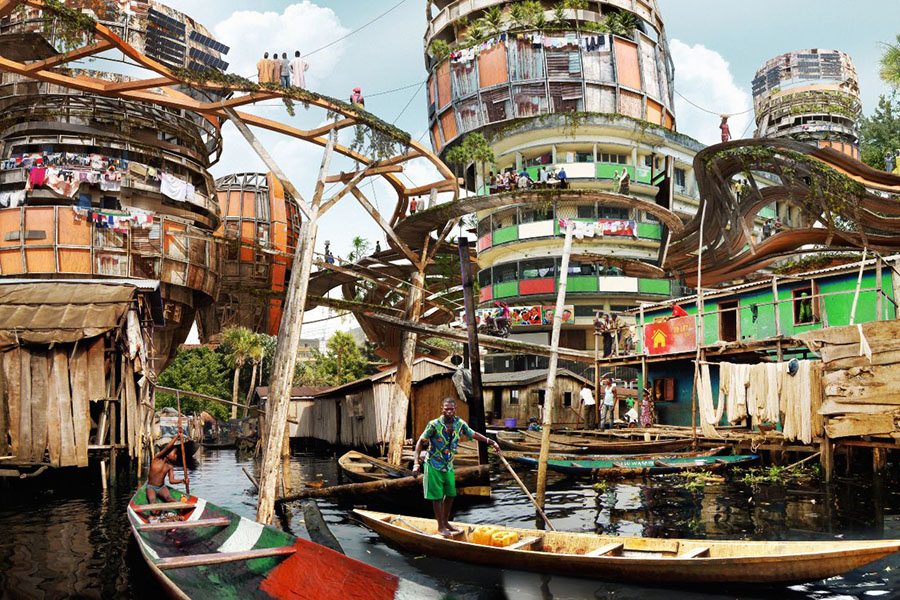 Olalekan Jeyifous imagined what Lagos would look like in 2050 in his "Shanty Megastructures" series. Image: Courtesy of MODA and Sekou Cooke Studios


At first glance, hip-hop and architecture have absolutely nothing in common. One is an ode to freedom, while the other is more rigid and immutable. Yet these two expressions of culture are one and the same in the context of "hip-hop architecture," an architectural concept that the Museum of Design in Atlanta is exploring in a new exhibition.

Titled "Close to the Edge: The Birth of Hip-Hop Architecture," the show is curated by Sekou Cooke. This American architect and academic is best known for his essay "The Fifth Pillar: A Case for Hip-Hop Architecture," published in 2014 in The Harvard Journal of African American Planning Policy. In it, he argues that hip-hop "would not exist if not for architecture, urbanism, and city planning."

This is linked to the fact that hip-hop came about in reaction to the social policies of urban renewal launched by Robert Moses, the master builder of New York City, who was responsible for the Cross Bronx Expressway. The construction of this freeway led to the displacement of entire populations, mostly Afro-Americans and Latinos, to wastelands in the east of Brooklyn and the southern part of the Bronx. These slums served as incubators for this musical movement, prompting architects like Sekou Cooke and Mike Ford to claim that Robert Moses was the "true father" of hip-hop.

The exhibition at the Museum of Design in Atlanta forms part of a continuation of Sekou Cooke's essay, and demonstrates how hip-hop architecture has continued to develop over the past 25 years. It draws on the work of some 30 pioneers who design spaces and buildings that "translate hip-hop’s energy and spirit into built form." Among them are Ujijji Davis, Nina Cooke John, Olalekan Jeyifous and Mauricio Zamora.

Olalekan Jeyifous has made Lagos his main source of inspiration. The Brooklyn resident, who graduated from the prestigious Cornell University in 2000, has imagined what the Nigerian metropolis of 15.4 million inhabitants would look like in 2050 in his "Shanty Megastructures" series. He imagines a city where gigantic tin shacks tower above the upscale residential areas, making the poorest communities more visible.

Also read: What are water squares and how can they help prevent urban flooding?

And this is what hip-hop architecture is all about: questioning the city and the validity of its design. Hip-hop serves as a catalyst for the architectural design process, infusing it with spontaneity, history and universality. And "Close to the Edge" demonstrates the intrinsic link between the street and urban cultures through façade studies, urban development proposals, installation strategies and building plans. It is an opportunity for city dwellers to question the dynamics that have shaped their daily environment.

Tweets by @forbesindia
E-Rupee is finally actual adoption of crypto by the government: Vaibhav Gupta of DesiCrypto
FIFA U17 Women's World Cup: All you need to know