What are water squares and how can they help prevent urban flooding?

In the coming years, climate change is expected to increase the intensity and frequency of heavy rainfall events. Some cities, such as Rotterdam and Montreal, have therefore opted to create water squares, also known as multifunctional floodable squares 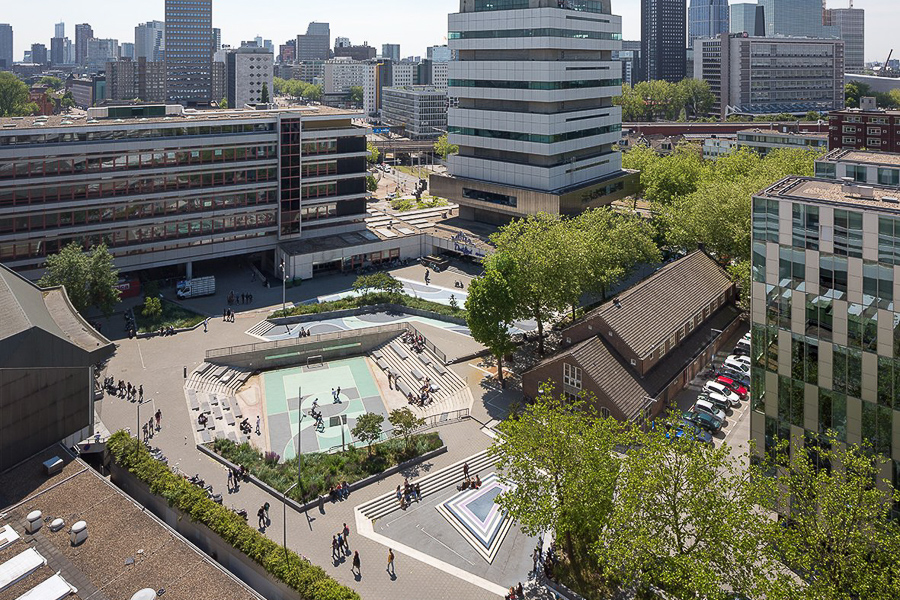 A water square is an urban feature that's effectively a kind of plaza or square that's designed to be submerged in the event of heavy rainfall. By collecting this water, the water square prevents flooding in the city. In dry weather, the space can be used by residents for sports or cultural events.

In the coming years, climate change is expected to increase the intensity and frequency of heavy rainfall events. In largely concrete areas, these heavy rain episodes can cause flooding problems. Cities, such as Rotterdam and Montreal, have therefore opted to create water squares, also known as multifunctional floodable squares.

This urban development takes the form of an open-air public square that can be flooded in periods of heavy rain. Rainwater from the surrounding streets and rooftops is directed to water retention pools and gradually infiltrates into the ground through a specially designed system. The surplus can be stored in the pools for 36 hours, thus avoiding overloading the sewer system and reducing wastewater discharges into waterways.

The first water square was built in Rotterdam, the Netherlands, in 2013. The Benthemplein square can collect up to 1.7 million liters of water, the equivalent of an Olympic swimming pool. In dry weather, it is used by Rotterdam residents to play basketball and skateboard. There is also an amphitheater.

The infrastructure required to create this type of facility is integrated into the urban landscape. For example, stainless steel water pipes are used as ramps for skateboarders.

Since then, other floodable squares have been built around the world, such as in Montreal, with the Place des Fleurs-de-Macadam and the Pierre-Dansereau Park.

Tweets by @forbesindia
The Big Picture: 'Bubbles compress time, busts expand it, so use this downturn wisely' — Sridhar Vembu
Bitcoin 'wholecoiner' wallets surge by 13k in the past week