It was the first time on record the reef had suffered bleaching during a La Nina weather cycle, when cooler temperatures would normally be expected 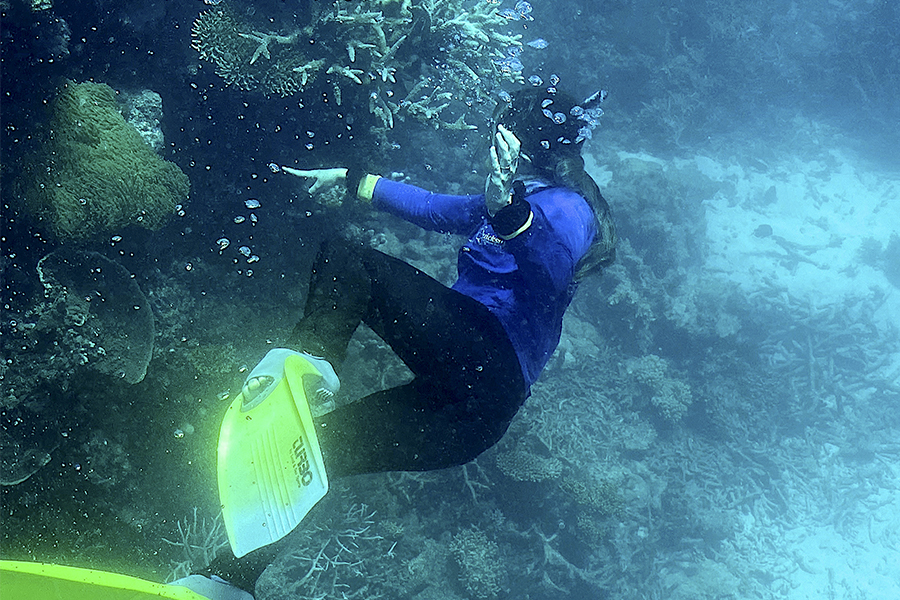 This picture taken on March 7, 2022 shows a diver pointing out at coral on the Great Barrier Reef, off the coast of the Australian state of Queensland. The Great Barrier Reef has again been hit with "widespread" bleaching, authorities said on March 18, 2022. (Credits: Glenn NICHOLLS / AFP)

Sydney, Australia: A prolonged summer heatwave in Australia left 91 percent of the Great Barrier Reef's coral damaged by bleaching, according to a new government monitoring report.
It was the first time on record the reef had suffered bleaching during a La Nina weather cycle, when cooler temperatures would normally be expected.
The Reef Snapshot report offered new details of the damage caused by the fourth "mass bleaching" the world's largest coral reef system has experienced since 2016, which was first revealed in March.
"Climate change is escalating, and the Reef is already experiencing the consequences of this," the report warned.

The Great Barrier Reef Marine Park Authority, which published the report late Tuesday, conducted extensive surveys of the World Heritage-listed reef between September 2021 and March 2022.
It found that after waters began to warm last December, all three major regions of the reef experienced bleaching—a phenomenon that occurs when coral is stressed and expels brightly coloured algae living in it.

Although bleached corals are still alive, and moderately affected sections of the reef may recover, "severely bleached corals have higher mortality rates", the report said.
Of the 719 reefs surveyed, the report said 654—or 91 percent—showed some level of coral bleaching.
The report was published 10 days before Australia's May 21 federal election, in which climate change policy has emerged as a key issue for voters.
Australia's 2019-2020 "Black Summer" bushfires and deadly east coast floods that swept away cars and engulfed homes this year have highlighted the country's growing climate risks.
Prime Minister Scott Morrison has, however, resisted calls to make the country's 2030 emissions reduction target more ambitious, while vowing to mine and export coal for as long as there are buyers.
The Labor opposition has promised to boost renewables and commit to a 43 percent cut in greenhouse gases by 2030 but made no mention of phasing out coal burning.

"Although bleaching is becoming more and more frequent, this is not normal, and we should not accept that this is the way things are," Australian Marine Conservation Society campaigner Lissa Schindler said.
"Both major political parties need to face up to the fact that their climate goals are not enough for the Reef."
During Australia's election campaign, there has been another force in favour of climate action at play, with more than 20 climate-focused independent candidates running for key seats.
These independents—mostly women—are being financed to stand for election by a fund, Climate 200, set up by activist-philanthropist Simon Holmes a Court.
Most of them are standing in urban, conservative seats against ruling Liberal Party candidates, seeking to sway voters who want stronger climate action.
Polls indicate a few conservative-held seats may be at risk, including Treasurer Josh Frydenberg's.
Greenpeace activist Martin Zavan, meanwhile, said fossil fuels were to blame for the coral bleaching.
"Whoever leads the Australian government after the election must have the courage to stand up to the vested interests of the fossil fuel industry and drastically cut emissions by replacing coal and gas with clean energy," he said.
Next month, the United Nations' World Heritage Committee will decide whether to list the reef as "in danger".
Australia was able to avoid a threatened UN downgrade of the reef's World Heritage status in 2015 by creating a "Reef 2050" plan and pouring billions of dollars into protection.
By Maddison Connaughton
© Agence France-Presse