How artificial intelligence is branching out into politics

Leader Lars of the Synthetic Party in Denmark, robot artist Ai-Da, and chatbot Alisa are some of the recent examples of new technologies making their mark on 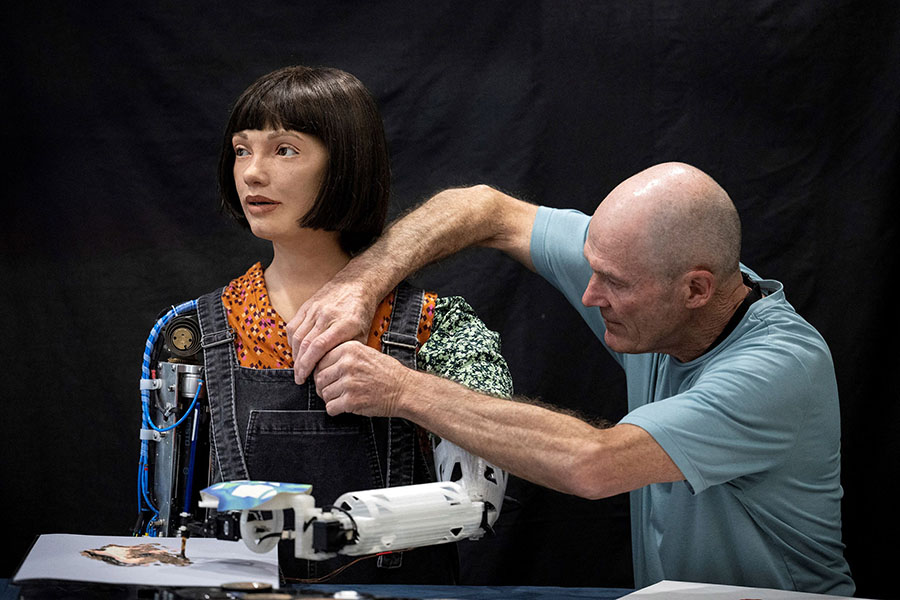 New technologies are increasingly invading our daily lives, and are even making their way into politics. In Denmark, for example, a political party led by an artificial intelligence has now been founded. Its name? The Synthetic Party.

The Synthetic Party was created in May by the art collective Computer Lars and the non-governmental organization MindFuture Foundation. It is helmed by Leader Lars, who is not a human, but a chatbot with which internet users can converse via Discord.

To create its own manifesto, this artificial intelligence drew inspiration from the political programs of all the Danish fringe parties since 1970. Leader Lars is thus in favor of a universal monthly income of 100,000 Danish kroner, equivalent to $13,700, according to Vice. That's more than twice the average wage in the Nordic country.

Leader Lars also advocates the use of the klèrôtèrion, a machine that in Ancient Greece allowed citizens to be chosen at random to perform certain public tasks. The party's AI leader would like to use this system to see all members of the Danish parliament replaced every month by members of civil society. Of course, this version of the klèrôtèrion would incorporate artificial intelligence.

Leader Lars' political manifesto is supposed to represent the values of the 20% of Danes who did not vote during the last parliamentary elections in 2019. However, the leader of the Synthetic Party will not be able to carry this agenda into the upcoming Danish elections, since the AI is not a being made of flesh and bone. It is the human members of the party who will do that.

The Synthetic Party is aiming to win a seat in the country's early general election on November 1. However, it still needs to collect the 20,182 signatures necessary to make it eligible to run. It only has 12 at the moment. But that's not discouraging the members of the Synthetic Party. Their main goal is to raise public awareness about the role of artificial intelligence in our lives and how governments can use it for the common good.

To that end, they hope to add an 18th Sustainable Development Goal to the UN list. This would focus on the relationship between humans and artificial intelligence, as well as on how to educate people to work with machines. "AI has not been addressed properly within a democratic setting before," said Asker Staunæs, the creator of the party and an artist-researcher at MindFuture, speaking to Vice. "So we try to change the theme to show that through artistic means and through humans curating them, artificial intelligence can actually be addressed within democracy and be held accountable for what it does and how it proceeds."

Surprising as it may seem, this is not the first time that an artificial intelligence has entered the political debate. Residents of the city of Tama, Japan, experienced this during the 2018 municipal elections. At the time, Michihito Matsuda, a former unsuccessful candidate in the previous elections, chose to focus his entire campaign on artificial intelligence. In particular, he planned to put this technology at the center of all political decisions in the municipality. That same year, the chatbot Alisa ran against Vladimir Putin in the 2018 Russian presidential election.

More recently, the robot-artist Ai-Da addressed the UK House of Lords. This humanoid robot with feminine features—alongside its creator Aidan Meller—spoke about the possible influence of artificial intelligence on art, design, fashion and the music industry. A technology that represents both "a threat and an opportunity" for artists, the AI said in response to questions submitted for the session.

Tweets by @forbesindia
Stay on and finish the game: Suresh Raina's advice to India's T20 team
Photo of the day: Safety before celebrations