Stay on and finish the game: Suresh Raina's advice to India's T20 team

As India begins its campaign against Pakistan on October 23, Raina, a T20 expert during his playing days, feels Hardik Pandya and Surya Kumar Yadav will hold the trump cards 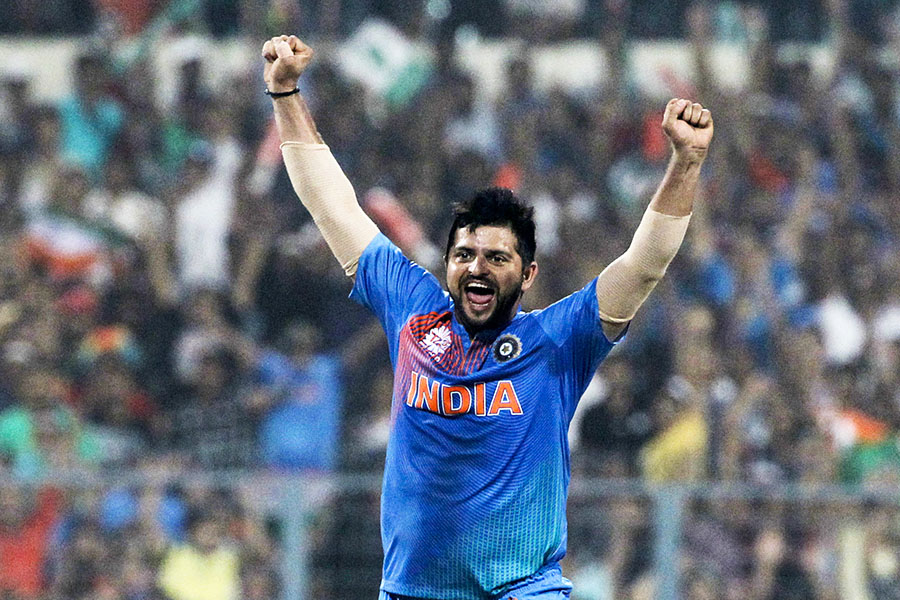 Suresh Raina celebrates taking the wicket of Sharjeel Khan of Pakistan during the ICC World Twenty20 India 2016 match between Pakistan and India at Eden Gardens on March 19, 2016 in Kolkata, India. Image: Vivek Prakash-ICC/ICC via Getty Images

With his prolific scoring and electric fielding, Suresh Raina was a master of the shorter format, be it for the national team or his IPL side Chennai Super Kings. The first Indian batter to score a century in all formats, Raina may not be remembered as much for those hundreds as he would be for smaller contributions down the order that swung the game. Having announced his retirement earlier this year, the southpaw is now engaged with the Gracia Raina Foundation, an NGO he set up along with his wife, and his family that, he says, had taken a backseat during his playing years. In Mumbai as the ambassador of booking.com, the official accommodation partner of the ICC Men’s T20 World Cup, the southpaw sat down for a chat with Forbes India. Edited excerpts:

Q. You recently announced your retirement from cricket. What plans do you have lined up for the second innings?
Spending time with my family, my wife and my kids. Doing a lot of NGO work with the Gracia Raina Foundation. When I was young, I didn't spend time with my family, especially with my parents, because I went to boarding school in Lucknow in 1998. Now that I have some time on my hand, I want to spend it with my family. My father recently passed away, so I'm looking after my mom now. I’m also enjoying dropping my daughter to school and my son to playschool.

Q. Given how chock-a-block the cricket calendar is currently, how does a modern cricketer perform to the best of their abilities?
Earlier too. There used to be Tests, ODIs, and T20s, and we would play domestic cricket as well. It all comes down to time management and what your priorities are. You need to switch on and off at the right time. If you do that, you can easily play for 10-12 years.

And when it comes to players for multiple formats, thanks to the IPL, we have 70-80 cricketers now ready for the international level. Look at the present scenario where the T20 team has gone to Australia while a second team recently took on South Africa in ODIs. IPL has enabled the emergence of players like Yashasvi Jaiswal and Rinku Singh, who have support teams of the best doctors, physiotherapists, coaches, nutritionists and so on that will further their career; the tournament also gives them the opportunity to earn enough money to look after their families. There is a lot of professionalism in the game now. You know where you are going, you just need to stick to the right path.

Q. You were considered a T20 specialist and also earned yourself the moniker of Mr IPL. With the surge of interest around the format, do you think T20 will consume the other two formats of the game?
I don’t think so. Now is the season of T20s, because the World Cup is upon us. But if you see the calendar till 2027, we are playing 40 Test matches—18 at home and the rest away. This is at a time one feels that T20 will consume other formats. When it comes to ODIs, we haven't had an ICC trophy since the Champions Trophy in 2013. But India is preparing well now, and we'll have a line-up after the T20 World Cup that will go on till the ODI World Cup to be played in India next year. Soon enough, we will have to think about how to prepare for 50 overs. Our players like Virat Kohli, Rohit Sharma and so on are adept enough to do that. I see no reason why the three formats can't co-exist.

Q. Your perspectives on India’s chances in the T20 World Cup?
India’s looking like a very good team. All the other teams, too, don’t have too many weaknesses—they are all ready for the tournament. One just needs to have good intent and mindset for 20-25 days to win the tournament. Your character shows up in the shortest format. Players like Hardik Pandya and Surya Kumar Yadav will be India’s trump cards. Virat Kohli is in very good form. Captain Rohit Sharma is a gun player. Then, there’s Arshdeep Singh, who has done well in both domestic tournaments and the IPL. My advice is: Whoever’s having a good day must stay till the last ball and finish the game.Also read: Cricket, Kabaddi, and freedom: Parimatch's big bet in India

Q. Your thoughts on the new T20 rule of 'impact players', a substitute before the 14th over, which is being tried out in the Syed Mushtaq Ali Trophy?
We’ve had the super sub rule before, but that has been removed. The 11 players you have in your team are all impact players. If you are bringing someone after the 14th over, they aren’t going to create much impact in the rest six overs. Yes, it might give the captain another option, but I am not much in favour of the rule.

Q. Playing cricket in India entails not just on-field skills but also managing a lot of expectations from outside. How does someone deal with it?
I come from a place where playing cricket was everything to me. From a small village in UP to be sitting in the same room with players like Sachin Tendulkar, Rahul Dravid, and Virender Sehwag was enough for me in the first place. The goal was to play for the country. I found out much later that when you play for the country, there comes a lot of expectations. The thing is to try and learn from failures much more than you can learn from successes.

I am a middle-order batsman. It's not possible for me to score a century every time I walk out to bat. So, I decided to excel in fielding because that's in my control. When I was batting, I didn’t get 50 or 20 full overs while playing ODIs and T20s respectively, but when I was fielding, I was on the field for the entire duration and had the opportunity to make the maximum contribution. So, whatever you do, you have to look to contribute. If you play with the mindset, you will end up performing well.Also read: Dream11 turned fantasy (gaming) into reality. Now it's eyeing a diversified sports tech futureQ. International sports entail that you constantly push out of your comfort zone. Can you give a few instances from your career where you had to do that, and what lessons have you learnt from them?
For me, staying out of my comfort zone came very early when I had to stay away from my family. I missed my sister’s wedding because I was playing a match against East Zone in 2004. I scored a hundred in the game. If I had skipped that and attended the wedding, I would have never caught the eyes of the selectors with the century.

From a young age, I have spent time in hostels, away from my parents. Those were difficult days, and I had to face ragging. At that time, I knew nothing. I had to learn everything from scratch—right from cricket skills to things like time management and how to balance studies and sports. Back then, we had to queue up after our seniors to get a chance to reach the phone and call home, and it might be only once every week that you’d get to speak to your parents. Now times have changed and life’s much easier, but I look back at that time for the lessons I’ve learnt.

Q. At a time you had to face ragging, what gave you the motivation to continue?
By sharing everything with my brother and father who told me not to quit and just keep at it. It’s good to share because had I bottled it up, I wouldn’t have gotten the right advice. Every time I spoke about it to my family members, they guided me on the right path and asked me to push back against obstacles and focus on what I was here to do.

Q. What are the key lessons that being an international athlete has taught you?
Discipline and honesty. If you are honest, discipline will follow, and if you have discipline you will have the focus to carry you through. If I were to pick between talent and discipline, I would go with the latter. If you have talent but not discipline, you will barely last for a couple of matches. But if you are disciplined, you can stretch that talent for years and years.

Tweets by @forbesindia
From mood-boosting sauces to coffee-ripened cheese, new foods bringing innovation to the table
How artificial intelligence is branching out into politics