From mood-boosting sauces to coffee-ripened cheese, new foods bringing innovation to the table

From the surprising to the slightly more dubious, here's a look at some of the food innovations from the 126 countries represented at the SIAL food fair in Paris 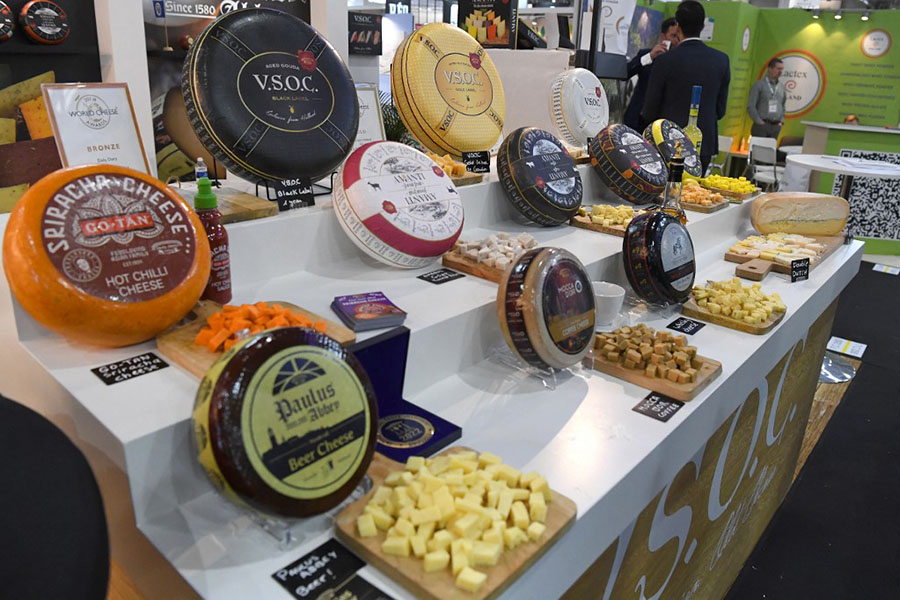 Different types of cheese from the Netherlands are displayed at the Paris 2022 International Food Fair (SIAL) in Villepinte, northern Paris on October 15, 2022. Image: Eric Piermint / AFP

For five days, the Paris-Nord Villepinte exhibition center is effectively transformed into one giant supermarket of new foods for the SIAL food fair. From the surprising to the slightly more dubious, here's a look at some of the food innovations from the 126 countries represented at this global food marketplace.

Do you remember corned beef, that compacted meat that looks like dog food packaged in a characteristic tapered metal can? Back in the 1990s, this British store-cupboard staple was often a quick fix after a night on the tiles.... or when you didn't feel like going grocery shopping. Now, corned beef is making a comeback in supermarkets in plant-based form. In the Philippines, the Century Pacific Food brand has reworked the recipe to remove all animal protein and offer a plant-based substitute. Launched just days ago in US supermarkets, this plant-based corned beef is revamping the image of a food that has long been criticized for its high number of additives. In this vegetable version, the range called Unmeat promises to have reduced salt by 60% and nitrites by 30% compared to the meat-based version.

If you're not nostalgic for the taste of corned beef, don't worry the food industry probably has you covered with another item, since pleasure is the leading purchasing criterion for 72% of consumers worldwide, according to a study conducted by SIAL. So how about sampling a coffee-ripened cheese? You might often wonder whether you should remove a cheese's rind or not. At a time when food waste is a pressing issue, one Dutch family at the helm of a huge cheese business decided to put an end to this dilemma. The rind of their new cheese is not only edible, but also tasty! Indeed, the result of this coffee maturation process is quite amazing. This product is just starting to go on sale.

Among the many food innovations, the use of natural ingredients stands out as one field of development for brands wishing to satisfy the demands of certain consumers with nutritional products. You may remember the trend for functional foods—foods that promised health benefits by borrowing from the world of medicine. While this category has struggled, mainly because of regulatory issues, a brand from Turkey is on a mission to put a smile on shoppers' faces with a range of sauces and dressings enriched with saffron, blueberries or chia seeds. This brand, called Chef Season, plans to tap into the vast array of functional ingredients to deliver a good-mood boost. In other words, the brand is promoting the beneficial properties of these ingredients, since chia seeds can apparently help regulate mood. And this isn't the brand's first such marketing coup. It also landed a collaboration with the famous chef Salt Bae, the influencer whose salt seasoning became a globally recognized gesture. The chef's range was also present at SIAL, with a line of new salt flakes bearing his name. The texture is innovative, with grains resembling tiny pebbles, as from a fine sand beach.