Teff, grain of the future, holds promise for feeding livestock and people

In the context of global warming, there is growing interest in this grain because teff can grow in poor soils without being affected by drought and strong heat 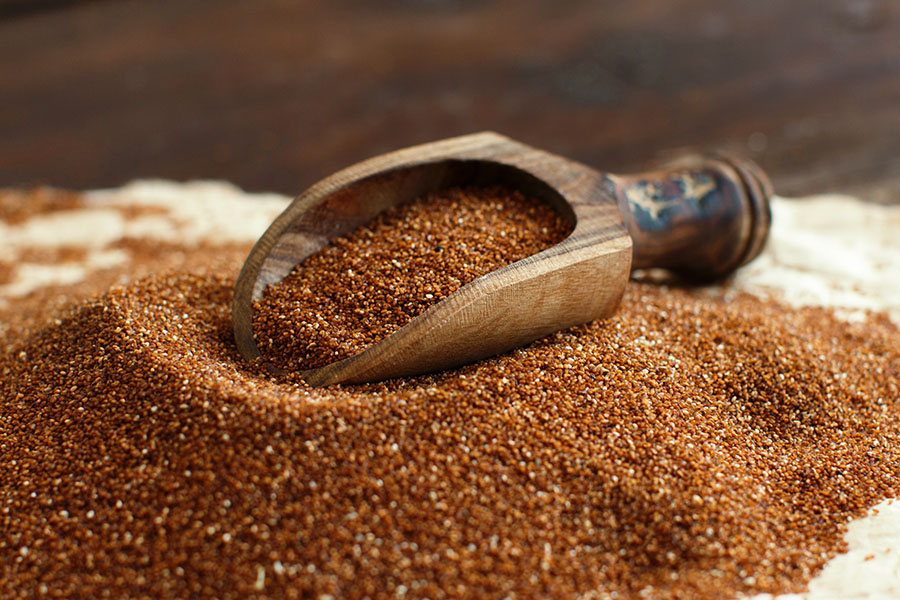 Teff is a gluten-free cereal that has been grown in Ethiopia for 3,000 years. Image: Shutterstock

On October 16, the world will mark World Food Day, an annual event that commemorates the creation of the United Nations Food and Agriculture Organization (FAO). Since the aim is to raise awareness about hunger and poverty in the world, we are revisiting the essential role that one kind of food has always played in our lives: grains. And in this era of global warming, lesser-known varieties, such as teff, are moving into the spotlight.

One staple food in Ethiopia is a kind of pancake-like flatbread that serves as a base for simmered meat dishes or other protein-based recipes. Called injera, it is synonymous with Eritrean and Ethiopian cuisine. And injera embodies the culinary traditions of the Horn of Africa all the more since it is made from a local grain called teff. This grass could easily be mistaken for millet, given the very small size of its grains. Derived from the word "teffa" used in the Amharic language in Ethiopia, its name means "lost" in reference to the very small size of the grains. And this is not its only similarity with millet, since this cereal does not contain gluten either.

A promising grain for the future

The farming of this tufty crop is suited to the arid massifs of an African region plagued by hunger and malnutrition. In the context of global warming, there is growing interest in this grain because teff can grow in poor soils without being affected by drought and strong heat.

Grown for 3,000 years in Ethiopia, teff has already made its way to Europe. Its cultivation is notably being trialed by farmers in France. The Dutch group Barenbrug, which has offices in France's Ile-de-France region, surrounding Paris, is marketing teff seeds for use as a forage crop. Harvested between May and June, this cereal—that can grow in temperatures over 30°C—does not, therefore, necessarily end up on plates, but is instead used to feed livestock. It's effectively used like hay. And after a scorching summer, marked by dramatic drought episodes, which led some farmers to give up livestock for lack of sufficient food, teff appears to be a potential solution for the future of agriculture. Indeed, faced with high temperatures, many farmers have no choice but to draw on their hay reserves, unless they are allowed to graze their livestock on fallow land.

Also read: Mushrooms on track to become the superfood of 2022

Rich in fiber and protein, but also in potassium, teff also contains an essential amino acid called lysine, which helps bone growth and the formation of antibodies. The grain has become part of the Western diet through its distribution in organic or health-food stores. Available in the form of flour— to make a chocolate cake, for example—or in small grains to be cooked, the cereal is now grown in Bulgaria, in the Netherlands, but also in India, Australia and the United States. You can even discover its smoky, nutty taste in pasta made from teff. Plus, it's an additional option for gluten-intolerant people who may be tired of eating quinoa or corn. However, the price remains largely prohibitive, with a kilo ranging from €14 to €20 from store to store.

Tweets by @forbesindia
'It' accessory of the moment: Eyeglass chains are getting a new lease on life
Our top reads of the week