'It' accessory of the moment: Eyeglass chains are getting a new lease on life 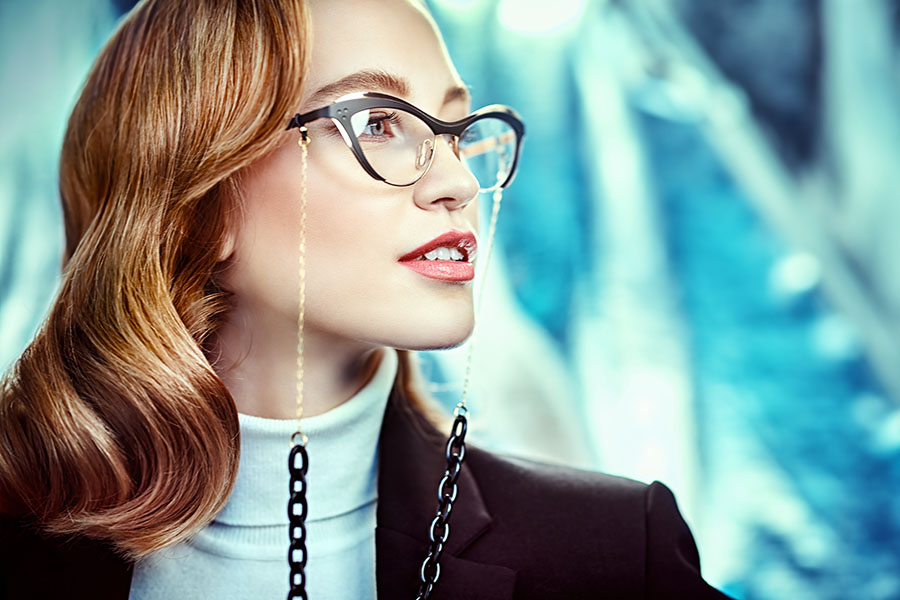 Considered kitschy and tacky in the 1980s, the eyewear chain is now a coveted accessory for young fashion fans. Image: Shutterstock

It's official: having been spotted on movie stars, models, and other influencers, the eyeglass chain is no longer just kitschy or simply old-fashion. Younger generations are embracing this accessory that has become such a phenomenon that major labels are outdoing one another with ultra-stylish versions, transforming it into a real piece of jewelry. On the occasion of World Sight Day, here's the scoop on this practical and trendy accessory.

Granny is obviously a fashion trendsetter—even though she may not know it herself—and her style is most popular among young fashionistas! After having revived the cardigan, scarves, barrettes, and even knitting, now granny is bringing out her eyeglass chains from the back of the closet. It might seem simply eccentric but it's another example of a wave of nostalgia in fashion for an era we never knew—and it goes beyond Generation Zs and millennials and a propensity for everything 1990s and 2000s. This time the trend goes back four decades earlier to a period when eyeglass chains were not just an aesthetic choice but above all a practical one, in fact for many wearers they were not even considered fashion accessories. Obviously this is no longer the case. Thanks to a slew of ultra-creative designers, this piece of jewelry is getting a new lease on life. It may even be the must-have accessory for the end of the year.

A new go-to piece for celebrities

There's actually been a movement underway for several years for eyeglass chains to make a comeback, with varying degrees of success. Celebrity models Bella and Gigi Hadid have been spotted several times with such an accessory, contributing massively to the rehabilitation of the image of an accessory that at one time was just a basic cord. And the two Americans aren't the only ones wearing these chunky chains out and about; Dakota Johnson was also seen sporting an eyeglass chain around the neck, while at the same time, major luxury houses, such as Chanel and Dior, have thrust the accessory into the spotlight with a cameo role in some of their runway shows. In fact, slowly but surely it's been making a breakthrough for nearly five years now to become something of a sure thing, having made a remarkable return to the forefront of the scene.

On social networks, particularly TikTok and Instagram, eyeglass chains are now showing up in thousands of publications, paired with as many trends, which is the key factor showing their versatility. On the Chinese social network, the hashtag #eyeglasschain has already racked up several hundred thousands of views, and this is without counting, as always, on the many variations of the term. And the videos using the hashtag show us a nearly infinite number of ways to wear the accessory, as well as its many variations, for all genders. Because the eyeglass chain of today is indeed gender neutral.

For an idea of how the celebrities are wearing it, check out French model and TV personality Iris Mittenaere who chose a beaded model earlier this year for her holidays in Abu Dhabi, and Kim Kardashian who, more recently, made the eyeglass chain into a true punk accessory. The reality TV star opted for a (fake) nose piercing connected to many chains, including one connected to her sunglasses. That should reignite some interest in an accessory once considered tacky.

One more piece of jewelry

Like other jewelry pieces, the eyeglass chain is now available in various styles and formats The unsightly black cord that accompanied grandma's reading glasses is long gone. The styles of the moment are composed of small or large links, pearls, and many are even decorated with precious stones or fancy pompoms. Available in gold, silver or brass, like any other jewel they can be decorated with various shapes. In terms of length, you can find everything from shorter to extra-long versions. And the good news is that you can find them at a wide range of prices, whether at Le Petit Cordon, Atelier Kat H, or Rua Martine, specialists in the field, but also at jewelry and ready-to-wear stores, and even luxury brands, including Dior, Chanel, Fendi, and Saint Laurent.

There's no longer any reason to resist the call of an eyeglass chain and its double advantage: being at the cutting edge of style, while always having your specs nearby. Functional and aesthetic, right on trend.

Tweets by @forbesindia
Squash players were expected to just make up the numbers. I wanted to change that: Saurav Ghosal
Teff, grain of the future, holds promise for feeding livestock and people