The former cricketer is the founder of A&W Capital, a boutique investment banking firm behind some of the recent mega deals in Indian sports, including IPL winners Gujarat Titans, and has been slowly but surely building a solid foundation in India 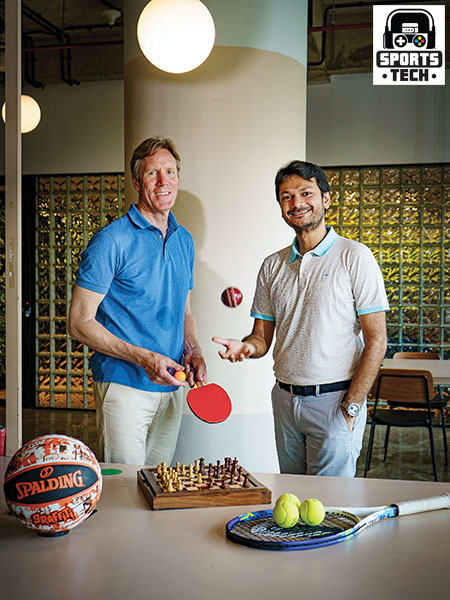 Matthew Wheeler’s tryst with India happened in 1996. The former Northamptonshire cricketer dabbled in sports marketing and investment after his playing years. “I was always familiar with India,” says Wheeler, who was on the board and non-executive chairman of the Professional Cricketers Association in England and Wales till 2019. In 1996, one of his companies was involved in the TV production of the cricket World Cup, which was jointly hosted by India, Pakistan and Sri Lanka.

Back then, in India, the state-owned entity Doordarshan didn’t have the capability of producing world-class pictures and quality meant for international spectators.

“We flew equipment and people from London for the event,” Wheeler recalls. “That was my first introduction to India,” he says, adding that he always believed in the potential of Indian sports and economy. “I was waiting for the right time to set up operations in India,” he says. The moment came in late 2016, when he set up A&W Capital, an investment banking firm focussed on sports, gaming sectors and digital media in Mumbai. For four years, A&W Capital took baby steps toward making progress in the country, kept its focus on understanding the complex Indian sports landscape, and roped in Paroksh Gupta to head the India operations in early 2020.

A year later, in October 2021, came the 1996 World Cup-like moment for Wheeler and his upstart company. Global private equity firm CVC capital forked out ₹5,625 crore for the Ahmedabad team, one of the two new Indian Premier League (IPL) teams that the Board of Control for Cricket in India (BCCI) added last year. Wheeler’s A&W Capital was the exclusive financial advisor to CVC Capital for the IPL franchise bid. “Between 2017 and March 2020, I came to India 30 times,” says Wheeler, underlining how he has been silently building operations in India. The idea, he reckons, is just to learn more about the country, listen to the people, do a bit of networking and look for opportunities.

The initial years of hard work seem to be paying off. Apart from the mega IPL deal, A&W Capital also played a big role in stitching a $25-million (around ₹185 crore) Series A funding for India’s biggest game streaming and esports platform Rooter early this year. The managing director and India head of operations explains what A&W Capital does. “We are the dealmakers,” says Gupta, who cumulatively spent almost a decade with global investment firm KKR and Bank of America Merrill Lynch before switching jobs and roles.

A&W Capital operates in areas that are underserved from the financial services point of view. Most investment banks, Gupta underlines, do deals which are over $100 million or in areas that are covered adequately, and A&W Capital has found a sweet spot in sports, gaming and digital media. What gives Gupta a kick in his role is the fact that while the traditional and biggies in the sector don’t create deals but only facilitate them, A&W Capital hunts for a non-existent opportunity. “There is real joy in deal creation,” he says.

What gives A&W Capital an edge in India is the knock played by its captain. Based out of London, Wheeler has built a vast network of partners and clients—PEs (private equity players), HNIs, corporates and management teams—across Europe and the US over the last three decades. A fast pace of growth of the Indian sports and economy has whetted the appetite of foreign investors who are looking to invest in India’s booming sports ecosystem, including cricket, kabaddi and football. Having an India operations and understanding the nuances of the market give a massive edge. “We make them understand that gaming, esports, fantasy and NFTs are distinct and all make enough commercial sense,” says Gupta.

There is another differentiated offering that Gupta brings to the table. “Our investor network is pretty international and quite differentiated,” he claims. The firm puts traditional set of VCs (venture capitalists) and PEs on the blind spot. The real value, he underlines, is connecting an interesting set of hyper-focussed investors in the US and Europe who add a different fillip to the growth trajectory. Apart from scouting for deals and investors, Gupta also helps the portfolio companies expand globally much like any VC firm. Take, for instance, Mobile Premier League (MPL). The gaming unicorn offers over 60 games in multiple categories such as fantasy sports, sports games, puzzle, casual and board games, and claims to have over 90 million registered users across India, Asia, Europe and North America. “We keep figuring out how can we help them go deep in the US or Europe,” he says. “We scout potential acquisitions targets for them and screen them together.”

So what is the most challenging part about making deals? Wheeler comes up with a quick one: Patience. The CVC deal, for instance, didn’t happen overnight. “They were first interested in 2017-18,” he says. “These things do take a long time.”

Gupta, for his part, reckons that having a firm conviction in the future of sports comes handy. There are times, he says, when deals don’t happen or look like they would not work out. That’s the uncertain part of the profession. “We just embrace complexity,” he says. “If there was no complexity, there’s very little value for people like us,” he signs off.