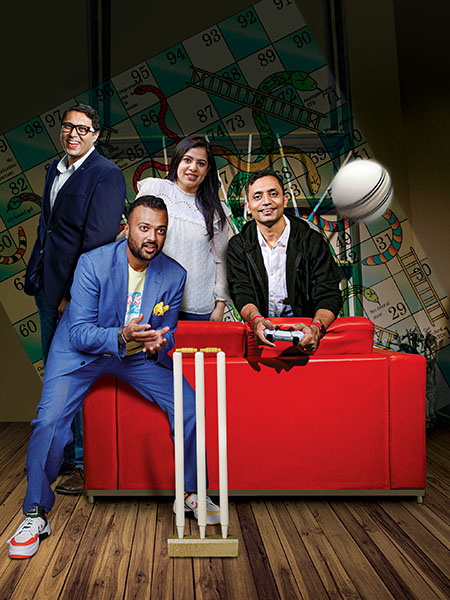 Let’s talk about the ladder first. In April, India emerged as the biggest country for mobile game downloads with a staggering 783 million installs, which is 16.6 percent of total worldwide downloads, according to latest numbers by Sensor Tower. “If you are not investing in India’s mobile gaming sector, then you are missing out on a massive opportunity,” reckons a senior venture capitalist (VC) working with an American fund that has made investments in one of the fantasy sports startups in India. “The segment is booming, growth has been fantastic, and one just needs to furiously keep climbing the ladder,” he adds, requesting anonymity.

The growth of gaming indeed had been fantastic on all fronts. A closer look at the Sensor Tower data tells us how India has been dominating globally. Subway Surfers was the most downloaded mobile game with 26.6 million installs in April. India accounted for 18 percent of the total downloads. The second country in the pecking order was the US, which made up for 8.2 percent of downloads. Garena Free Fire, which was the second-most installed mobile game worldwide with 25.2 million installs, had most players in India. At 33.6 percent, India was the top country with the largest number of Garena Free Fire installs.

Now let’s dice the gaming pie in India. Fantasy sports, the ones with the most money and grabbing the most eyeballs, was an estimated ₹34,000-crore market in FY21. It is projected to be a ₹165,000-crore market by FY25, according to a Federation of Indian Fantasy Sports (FIFS) and Deloitte report released in February. Cricket, as expected, made up around 85.24 percent of the online fantasy sports market. Hockey and football, though, managed over 6 percent each.

Esports too has galloped at a brisk pace. From just 9 million viewers in FY19, the numbers increased to 13 million the next fiscal, and are projected to touch 85 million in FY25. In fact, the industry is projected to surpass the Indian Premier League (IPL) in terms of prize money by FY25, according to an EY report published last year. Meanwhile casual games—in fact, most of us begin as casual gamers playing fruit-cutting games and others such as Candy Crush, Free Fire and Ludo King—have also raced ahead. A projection by KPMG pointed out that there were 420 million casual game users in FY21. The speed, growth and opportunity all have combined together to make India one of the top lucrative gaming markets for global and Indian investors.

Now, when you play Snakes and Ladders, and roll the dice, at times you end up encountering snakes. For the gaming sector, too, there are multiple snakes. First is the regularity bias. All online games are clubbed together. Look at esports, which is a medal game waiting to make its debut in the Asian Games this year, which comes under online gaming, and therefore gets clubbed with casino and race course in a proposal to tax all of them with a 28 percent GST. “Clubbing esports with the rest doesn’t do justice to the emotion and spirit of the sports,” laments Rajan Navani, founder of JetSynthesys.

The second snake is perception. Every snake is not poisonous. The VC quoted earlier tells us why he didn’t want to be named. “We know there is big money in fantasy sports. That’s why we invested. But there is taint too,” he confesses. The ‘taint’ alludes to an alleged link between gambling and fantasy sports. The regulations in India, he outlines, are not clear. There are states that have banned online gaming, including fantasy sports, and there are others where they are legit business. “We don’t want to be seen commenting on this moral-immoral debate,” he says. Another VC, which stayed away from investing in fantasy sports, echoes a similar feeling.

“What is the need to run a disclaimer that fantasy sports might have an element of financial risk and must be played responsibly?” he asks. If it’s a legit game, he argues, why is it confined to those above 18?

For India to make a big mark on the global gaming board, the need of the hour is legal clarity on all gaming siblings, and then facilitating a conducive environment for them to grow and flourish. Forbes India brings you a special issue on a bunch of online gaming players who have battled the odds, perceptions, and regulatory challenges to make a mark. For all of them, the game has just begun. Enjoy their pulsating journey.