Life on Mars: How our homes would look on the red planet

In partnership with British firm Hugh Broughton Architects and design studio Pearce+, artists Ella Good and Nicki Kent created an inflatable house, made entirely of recycled materials. This work was designed as part of the public art project "Building a Martian House," which explores how people would live on
Mars 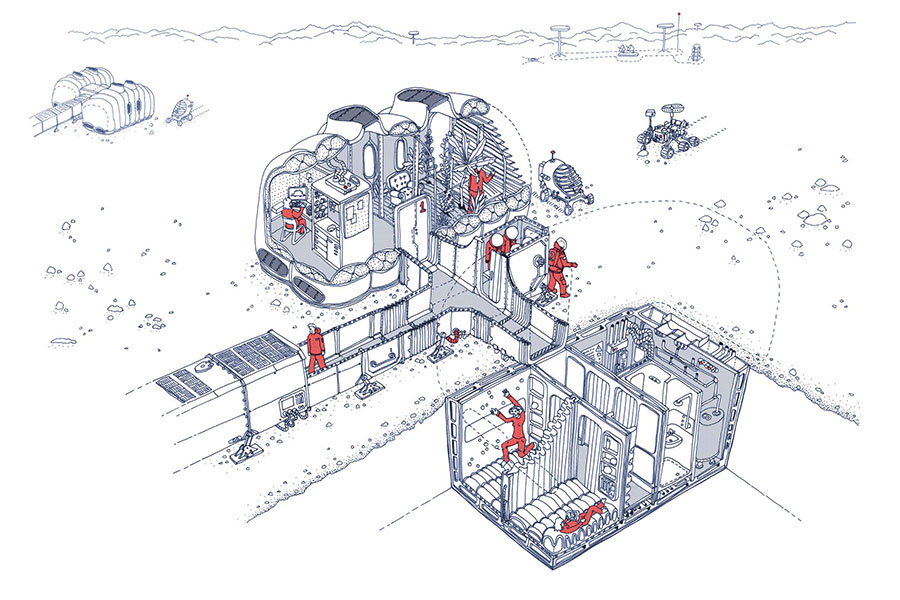 Two English artists from Bristol recently presented a strange house that could be ours if we lived on the planet Mars. Image: Courtesy of Hugh Broughton Architects and Pearce

Two English artists from Bristol recently unveiled a peculiar house that could be ours if we lived on the planet Mars. The hidden message behind this work? To build awareness among the general public by inviting them to think about the limited resources we have on Earth.

The idea of exploring the planet Mars and making it habitable as a kind of escape plan from Earth in order to preserve the human species has long been the subject of science fiction scenarios but also more serious endeavors. In fact, millions of dollars have been invested in the exploration of the red planet, with a view to developing space tourism, or even some day settling there in the eventuality that the Earth becomes uninhabitable. It's a hypothesis that has earned Mars the nickname of "Planet B"... and that has inspired a work by two English artists Ella Good and Nicki Kent, from Bristol.

In partnership with British firm Hugh Broughton Architects and design studio Pearce+, the artists created an inflatable house, made entirely of recycled materials. This work was designed as part of the public art project "Building a Martian House," which explores how people would live on Mars. Their installation was on display for more than two months on the docks in downtown Bristol, where passers-by were invited to take part in furnishing this strange capsule structure with orange-pink walls; inside one observes gardening hoses and plants―for instance, herbs.

Behind the house is seven years of work and collaboration with scientists, architects, engineers and designers. The structure is powered by solar panels and designed to be able to withstand environmental challenges that could be encountered on Mars, such as temperatures of -63°C and exposure to radiation. Covered with a golden roof made of aluminum sheets and built from a pair of old shipping containers, this artistic creation is full of everyday objects, designed with great care and sometimes with surprising details: a pillow, for example, has been filled with lavender and mustard seeds and natural, plant-based dyes were used to create color on textiles.

But, far from standing as a promise of a peaceful future existence, this "house" invites us on the contrary to reflect on the limited resources we would have if we lived on Mars. "The project uses the scenario of moving to Mars as a lens to reflect on our lives here on Earth – asking how we live now and how would we like to live in the future,"  Ella Good and Nicki Kent Explained to London-based design and architecture magazine Dezeen.

Also read: The curious speed of sound on Mars

A hidden message not unlike that of the satirical advertisement entitled "1%" broadcast in February 2021 by the environmental movement "Fridays for Future," to denounce the space programs focused on the planet Mars and financed by the governments of several countries in the world (the United States with the Perseverance rover, the United Arab Emirates and their Hope probe, China and the Tianwen-1 orbiter), as well as by the biggest fortunes on the planet (including Elon Musk with SpaceX). "Government-funded space programs and the world’s ultra-wealthy 1% are laser focused on Mars (NASA’s Perseverance Rover alone cost $2.7 billion for development, launch, operations and analysis)―and yet, most humans will never get a chance to visit or live on Mars. This is not due to a lack of resources - but the fact that our global systems don’t care about us―and refuse to take equitable action. With 99% of the world’s population remaining on Earth, it’s imperative that we fix the climate change that’s destroying our home planet. We’d better fix climate change now. We simply have no choice,” said a statement by the organization upon the video's release.

Tweets by @forbesindia
Acoustic wear: Our future clothing may be able to hear sounds and even communicate
Going forward, India will play a big role in Starbucks' international strategy: Michael Conway