Scientists in Saudi Arabia have developed their method using photovoltaic solar panels and a hydrogel, which allows water to be drawn from the air for use while also generating electricity 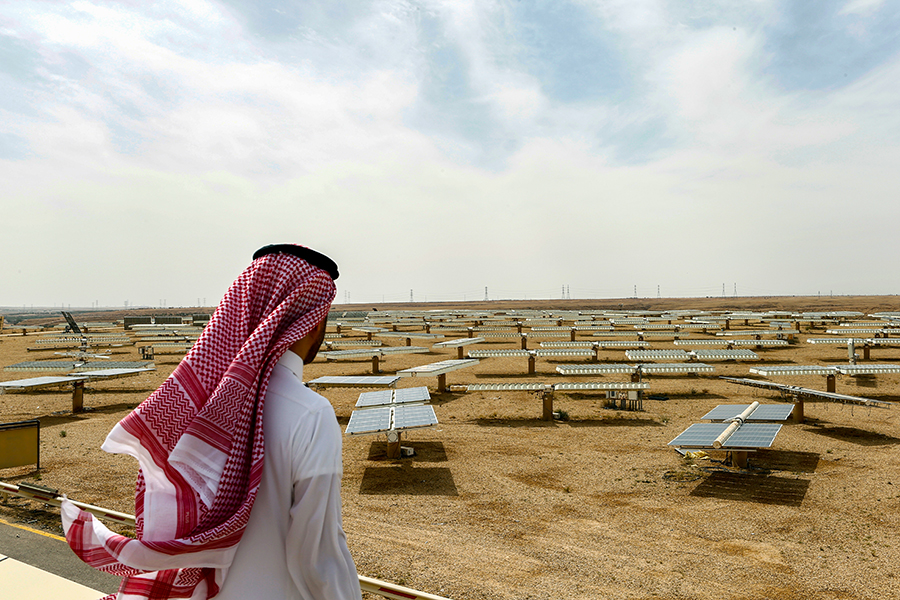 Scientists in Saudi Arabia have developed solar panels that absorb water vapor from ambient air. This has been used to grow spinach in the middle of the desert.
Image:  Faisal Al Nasser / Reuters

The scientists developed their method using photovoltaic solar panels and a hydrogel, which allows water to be drawn from the air for use while also generating electricity. The study, published in the journal Cell Reports Physical Science, describes a sustainable and low-cost strategy that could improve food and water security for people living in regions with dry climates.

"A fraction of the world's population still doesn't have access to clean water or green power, and many of them live in rural areas with arid or semi-arid climate," says senior author Peng Wang, a professor of environmental science and engineering at the King Abdullah University of Science and Technology (KAUST), Saudi Arabia.

Called WEC2P, the device is composed of a solar photovoltaic panel placed atop a layer of hydrogel, which is mounted on top of a large metal box to condense and collect water. "Our design makes water out of air using clean energy that would've been wasted and is suitable for decentralized, small-scale farms in remote places like deserts and oceanic islands," explains Professor Wang.

The hydrogel increases the efficiency of photovoltaic solar panels by up to 9% by absorbing heat and lowering the temperature of the panels, says the research. This kind of system could be used to light homes as well as to water agricultural crops.

To test their method, the researchers conducted a two-week experiment in Saudi Arabia in June (a hot period in this region). Water collected from the ambient air via the solar panels was used to irrigate 60 water spinach seeds planted in a plastic grow box.

The solar panel generated a total of 1,519 watts of electricity, and 57 of the 60 spinach seeds germinated and grew to 18 centimeters in height. About two liters of water were condensed from the hydrogel over the course of two weeks.

To optimize this prototype and potentially deploy it on a larger scale, the team of scientists plans to create a better hydrogel that can absorb more water from the air.

"Our goal is to create an integrated system of clean energy, water, and food production, especially the water-creation part in our design, which sets us apart from current agrophotovoltaics," the researchers explain.

Tweets by @forbesindia
New refugee crisis: 1 million-plus Ukrainians have fled the country
'The Batman' and Matt Reeves: Emerging from the shadow of other caped crusaders