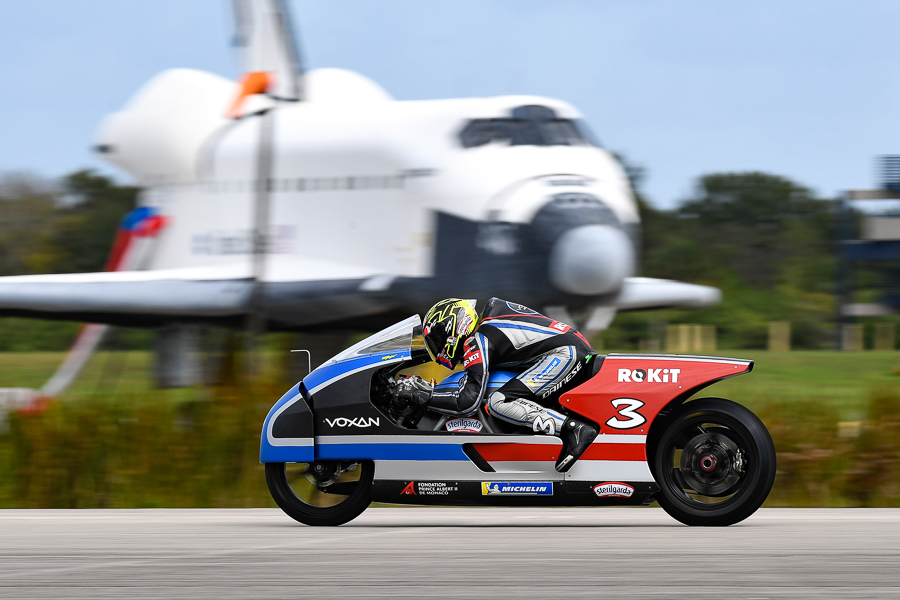 This Voxan Wattman motorcycle has broken a host of records in the "partially streamlined electric motorcycle under 300 kg" class.
Image: Courtesy of Venturi©

Decidedly, the Voxan Wattman is the fastest electric motorcycle in the world. The bike has just set 21 new world speed records in the United States, reaching a top speed of 470 km/h.

The Voxan Wattman continues to break speed records. The electric motorcycle has just set 21 new records, including the one mile, flying start record in the "partially streamlined electric motorcycle under 300 kg" class with a speed of 455.737 km/h and a maximum instantaneous speed of over 470 km/h.

In accordance with FIM (Fédération Internationale de Motocyclisme) regulations, this speed was measured after a flying start, over one mile out and one mile back. In the non-streamlined version, the Voxan Wattman reached an average of 369.626 km/h. Its other records concern speeds reached over a quarter mile (about 400m), 1 km and 1 mile (1.609 km), from a standing start or a flying start. For the occasion, the bike was once again in the hands of the Italian rider Max Biaggi, former world champion in 250 cc (from 1994 to 1997) and in Superbike (in 2010 and 2012).

To achieve such results, the Wattmann had to shed some weight, mainly thanks to a new battery design. Another important change is that its dimensions have been slightly increased for more stability and, above all, better air penetration, which is essential for achieving an optimal top speed. The powertrain is a Mercedes EQ, the same one used in Formula E (a single-seater motorsport championship for electric cars), which delivers 320 kW, equivalent to 435 hp. Finally, the bike's Michelin tires have been specially developed for these new record attempts, based on technologies tried and tested in MotoGP.

These new records were all broken on the Space Florida Launch and Landing Facility at Kennedy Space Center, Florida.

Unveiled at the Paris Motorcycle Show in 2013, the Wattman failed to find a following, and Voxan went into liquidation in 2015. Venturi, the brand's owner, has since revived it through these multiple record attempts.

Tweets by @forbesindia
More than a third of the world has never used the internet: UN
World AIDS Awareness Day: New HIV infections down 31% in the last decade: UNAIDS 2021