A tale of two cities

Poland's bloodied history has had a telling impact on Warsaw and Krakow, but both have shown exemplary resilience to be counted among the great cities of eastern Europe 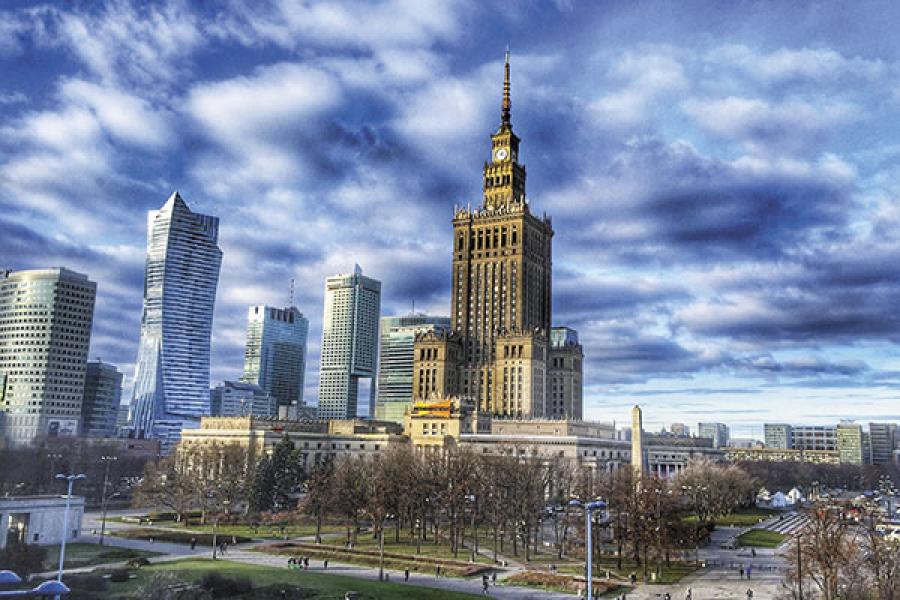 Image: Prathap Nair
Warsaw’s evolving skyline around the Palace of Culture and Science is slowly pushing its savaged past into oblivion

In downtown Warsaw stands a Soviet-era monolithic structure, tall and imposing, with its ambitious spire extending skywards menacingly. It is the Palace of Culture and Science built by Stalin in the 1950s as a “gift to the people of Poland by the Soviet Union”, says my guide Monica, as we drive past it the day I arrive in Warsaw in December 2015. It would certainly not be out of place in Moscow, Russia, where seven similar buildings, built by Stalin in the 1940s, stand scattered around the city and are referred to as ‘Stalin’s Seven Sisters’.

The futuristic, modern buildings around the Palace, one of which is called the Warsaw Spire, are slowly dwarfing Stalin’s gift in the Polish capital’s fast-developing skyline. But nothing has left a more telling trace of Soviet occupation in Warsaw as this landmark structure.

Perhaps no other country in Europe has witnessed such turbulent history as Poland. It has weathered repeated Russian invasions since the 1200s. Around the 15th century, the rising Ottoman and Prussian powers began to threaten its territorial integrity. Between 1772 and 1795, Poland faced successive attacks from the trio, each chipping away a bit of its borders. In 1795, the country ceased to exist and the old republic was divided between Prussia, Russia and Austria for the next 123 years, till 1918, when a brief period of Polish sovereignty ensued as the warring factions of Germany, Russia and Austria collapsed under the weight of their own turmoil.

The social fabric of Poland continued to suffer during World War II and in its aftermath,when a large number of Jews were killed, Ukrainians and Belarussians repatriated to the Soviet Union and Germans expelled. As a result, the country lost its multi-ethnic identity. As English historian Norman Davies puts it. “Poland is the most ethnically homogeneous country in the whole of Europe.” 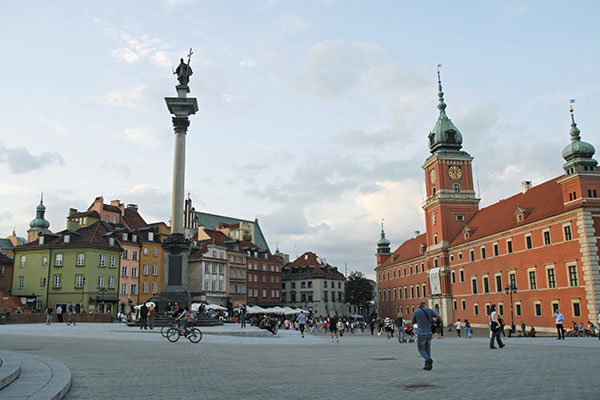 I have that on my mind as I watch the evolving skyline from my hotel window. That is also when I realise that the moniker ‘emerging east’, which is often bandied by economists, is perhaps fitting for Warsaw. A new government has just taken over and Prime Minister Beata Szydlo, in her speech, declared that the country’s development is her priority.

But I am curious about the old town and set out to explore it with Monica before the short winter day dissolvesd into the night. Much of Warsaw was destroyed by the Nazis in 1944 as Adolf Hitler set out to avenge the Warsaw Uprising in which the Poles unsuccessfully tried to oust the German army. Hitler’s ruthless assault damaged everything of cultural and architectural importance in the city. The destruction moved even US General Dwight Eisenhower, who visited Warsaw and said, “I have seen many towns destroyed, but nowhere have I been faced with such destruction.”

But the indomitable Poles reconstructed the city brick by brick, a process that lasted until 1962. Today, the cobbled alleyways, ornate facades and the charming town square of old town stand testimony to the city’s resilience. 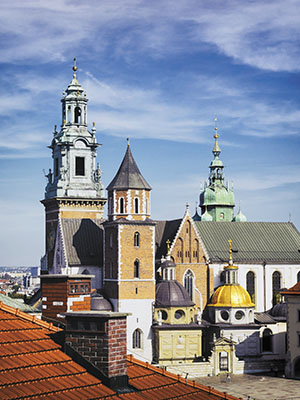 During World War II, Poland received help from many unlikely quarters. One such came from the Maharaja of Nawanagar, Jam Sri Digvijaysinhji Ranjitsinhji Jadeja, who gave shelter to 500 exiled orphans in his summer palace at Balachadi, Gujarat. These children, who were fleeing Soviet prison camps, arrived in then Bombay in 1942 in crammed ships. While they were barred from entering India initially, Jamsaheb, as the Maharaja was called, intervened and brought them to Balachadi village, saving them from perishing. In 2012, as a sign of gratitude, the Polish government dedicated a square in central Warsaw’s Ochota district to the Maharaja. We take a detour to what is now called, ‘The Square of the Good Maharaja’. There, standing among the oak trees, is a pink marble statue with a lotus on its head, on it the felicitation engraved in Hindi, English and Polish.

As twilight fades into darkness, we arrive at the Royal Route, an 11-km stretch that once covered a number of royal residences—Plac Zamkowy (or Castle Square), Lazienki Palace and Wilanów Palace—and many other monuments and churches. The Castle Square and the Royal Castle were entirely reconstructed after getting blown up during World War II. But the Lazienki Palace—built in Baroque style with intricate stuccos and statues—had a close shave: The Nazis even bore holes in it to stuff explosives, but had a last-minute change of heart and abandoned it. 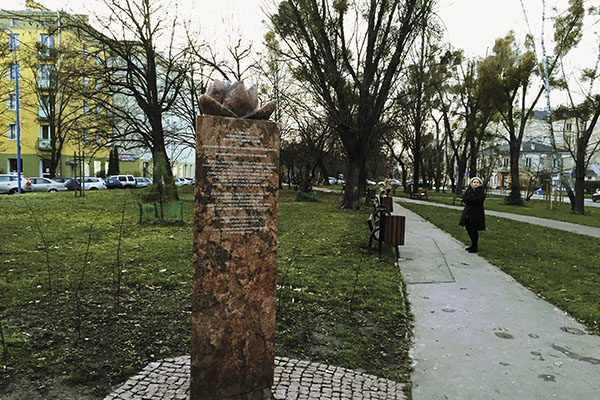 Image: Prathap Nair
The Square of the Good Maharaja

What stands out on the Royal Route for me is a delicately carved statue of Polish composer Fryderyk Chopin under a weeping willow tree. Legend has it that the Nazis destroyed the original monument in 1940 and an unknown patriot planted a placard on its rubble with a moving quote: “I don’t know who destroyed me, but I know why; so I don’t play the funeral march for your leader.” 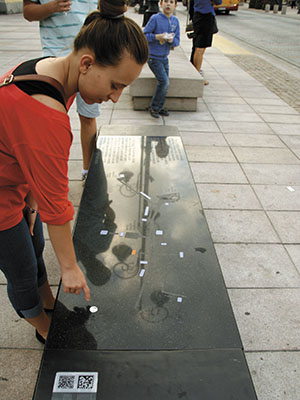 Chopin ranks high among sources of collective Polish pride, along with Copernicus and Pope John Paul II. To bring his music closer to visitors, the city has installed Chopin benches along the Royal Route. Sitting on these cast iron and granite structures, one can press a button following which 30-second clips of Chopin’s music fill the airwaves (pictured left).

Between the reconstructed old town and the Royal Route, I see a city that has been painstakingly rebuilt to not only reflect its present, but to also tell the story of a bloodied past that is slowly fading into oblivion.

I next arrive at the Warsaw Central station on a snowy day with Monica in tow. Another symbol of Polish economic progression, the station, Warszawa Centralna, is housed in a grand structure and is regarded as an example of Polish modernism for its edgy design and contemporary interiors.

The biting chill has brought Monica a migraine. We head off to a Starbucks and as she sips on her double espresso, she reminisces about growing up under the communist regime in the 1980s. “Those were food coupon days. We used to get coupons to buy things but nothing was available on supermarket shelves. Only alcohol,” she says.

But the Poland of today is different, particularly in the holiday season. Shortly after we board, the train throws up signs of how Krakow will be—full of tourists. As the train heaves along from the station, a bunch of Christmas holidayers and backpackers, lugging their heavy luggage, scramble to get in. 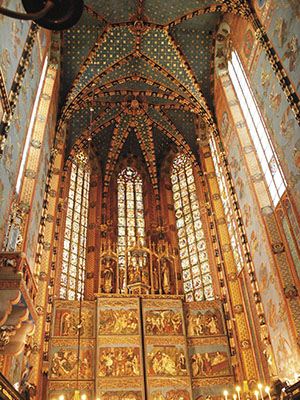 Three hours later, we are in Krakow. It is dark, but as we walk along the streets, crossing the market square, the town hall tower and the imposing St Mary’s Basilica, we can’t escape Krakow’s charm. Its beauty unfolds before our eyes the next morning as my new guide Maria takes me to its old town and streets that were lined with food carts selling Polish pretzel—obwarzanek—topped with sesame and poppy seeds.

Krakow survived several wars, from Mongolians as far back as the 13th century, and even Hitler. The city’s architectural and cultural marvels survived the Nazi and communist occupations. “Hitler loved Krakow and did not want to destroy it,” says Maria. Perhaps the same applies to the Soviet rulers who built a communist settlement only in the suburbs of Nowa Huta.

We walk up to Wawel Castle, a significant structure among Poland’s landmarks, which traces its origins back to 1000 AD. One of the main reasons the castle, located on a hill of the same name, wasn’t destroyed was because it served as the headquarters of Nazi Governor General Hans Frank during World War II. Standing by the river Vistula on the Wawel hill, its charming mansard roof is dwarfed by the copper green spires of the Wawel Cathedral on its left. In front of its lawns stand schoolchildren, in their rain jackets and selfie sticks extended to freeze frame one of the most charming monuments in Europe.

Our plan is to reach the St Mary’s Basilica in time for the bugle call so wind up our tour of Wawel and arrive at the market square. On our way, we peeked into the Collegium Maius courtyard inside the Jagiellonian University campus, where Copernicus attended classes, I am told.

At the Basilica, we join other spectators to see the trumpeter ringing the bugle call at the window of the church spire. The tune breaks midway, in memory of the trumpeter from the 13th century, who sounded the alarm and was shot when the Mongols attacked the city. 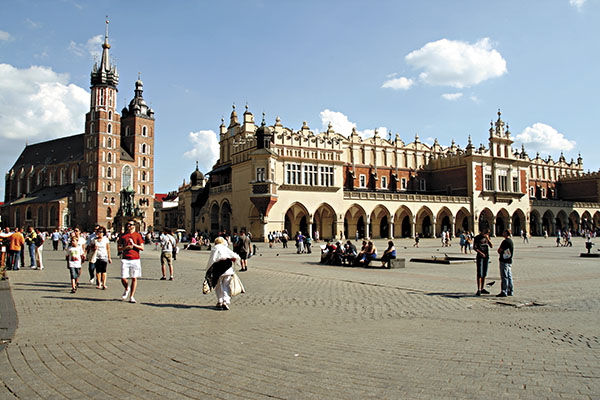 We end the tour of Krakow on another poignant note at the Schindler’s Museum that has come up in place of a factory owned by Oskar Schindler. Schindler was a wily German businessman who expanded his venture in Poland by bribing Gestapos and through other questionable means, but will be remembered in history as the one who saved hundreds of Jews from the Holocaust by hiring them at his factory and shielding them from the Nazis. In 1943, when Hitler’s forces dissolved the Krakow Jewish ghetto, sending its occupants to Płaszów concentration camp, Schindler convinced the authorities to let him open his factory on the premises and, in the process, saved about 1,500 Jews. His story has been immortalised by director Steven Spielberg in his Oscar-winning movie Schindler’s List.

Schindler’s erstwhile factory now reconstructs the history of Nazi occupation in Poland. It has on display posters of Nazi announcements, vehicles that were used to send Jews to concentration camps, letters sent by imprisoned Polish soldiers to their families, backlit pictures of the Jewish ghetto along with quotes by people (like director Roman Polanski) who lived in camps, among others.

Krakow is a beautiful city, perhaps one of the prettiest in east Europe. But could Warsaw have given it stiff competition if Hitler hadn’t destroyed it? “Perhaps,” says Monica, with a note of uncertainty.

As the day ends, we walk back to our hotel. The city’s air is awash with the celebratory spirit of Christmas and New Year. Fairy lights, in purple and pink, hang from poles, dimming the moon in the slate grey sky. How did I like my trip, Monica asks. I answer her with another question, “What’s not to like?”