From ForbesLife India: The haunting chants of India's Northeast hills

For the Apatani tribe in the Northeast, animal sacrifice is a way of life. During the annual Myoko festival, it is also seen as a harbinger of the year to come. But the rituals are not for the faint-hearted 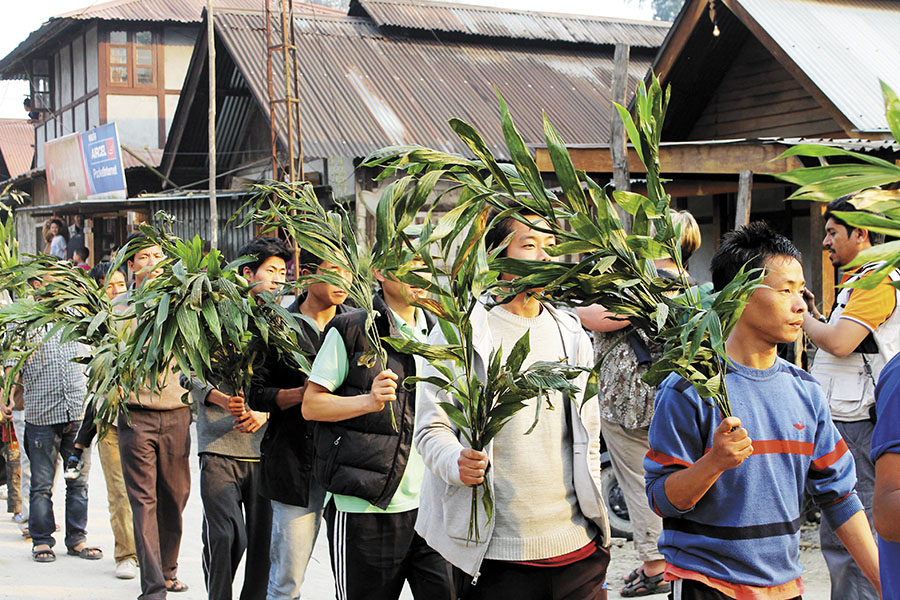 Men with palmyra leaves march the streets, chanting in a synchronised manner, as part of the annual Myoko festival of the Apatani tribe
Image: Prathap Nair

A naked bulb, hung loosely from the branches of a leafless peach tree laden with blossom, spills its soft, yellow light, illuminating a small crowd of onlookers. Under this eerie glow, in the deepening twilight, an elderly Apatani shaman sits cross-legged. His mumbled chants rush to fill the chilly air of the courtyard of a house in a basti (a small village or settlement) in Ziro Valley, Arunachal Pradesh. His face is deeply creased with wrinkles and furrows; his thick, matted hair is bunched into a knot at the top of his head, supported by metal chopsticks acting as hairpins. Before him is a hollow frame, roughly hewn together with peach branches, nailed to the earth. A slender bamboo pole is jabbed into the middle of the frame.

I shift uneasily among the milling crowd of enthused villagers as the shaman picks up a chick and fastens it on the bamboo pole by its feathers. The shaman’s chanting intensifies. In a short while, after the chanting is over, the sacrifice will begin. Predictions for the year ahead will then follow.

This ritual will officially mark the beginning of the Myoko festival, celebrated to promote a sense of community and kinship among the Apatani tribespeople.

I had agreed to accompany my friend on a trip to Ziro in March a year ago. This would coincide with the Myoko festival, and in my excitement to visit the famously remote Northeast of India, an area I’d only read about in travel literature, I didn’t think much about what it would entail. In my head, I had imagined rolling hills, friendly people pleasantly drunk, festivities involving elaborate costumes and singing in a tribal language accompanied by dancing in apong (rice beer)-induced inebriation. What I hadn’t envisioned was what would happen before and after the drinking and dancing—animal sacrifice. 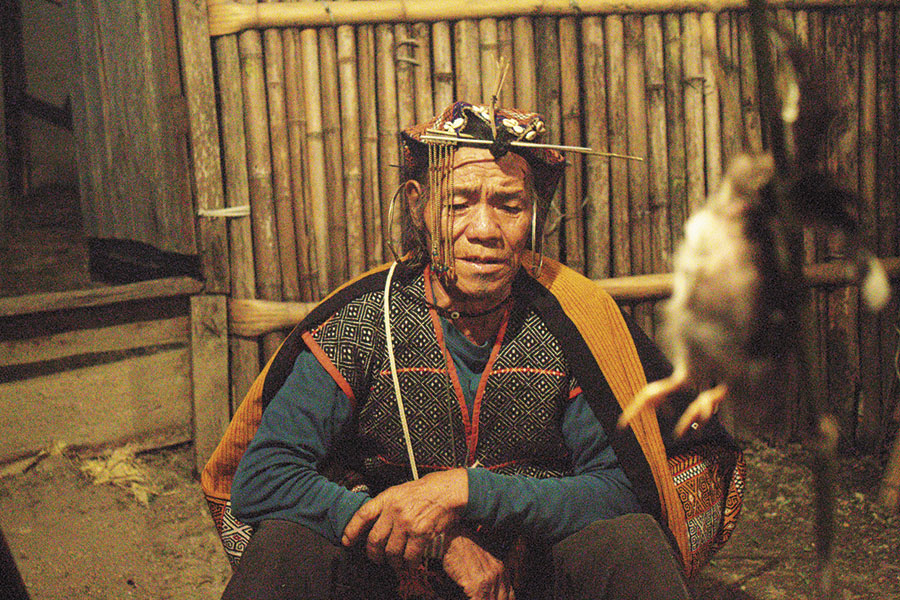 A shaman fastens a chick by its feathers on a bamboo pole, as part of the rituals at the annual Myoko festival that involves animal slaughter
Image: Prathap NairThe Apatani tribe, that inhabits the Ziro Valley in the eastern Himalayas, is one of the few tribes left in the world that practices animism—the belief that attributes the happenings of the world to the working of spiritual beings and to appease them, animals are sacrificed. The faith, called Donyi Polo (sun and moon), involves traditional festivals that are marked by ritual sacrifices of animals and birds (chicken, pig, cattle) followed by the reading of the entrails of the sacrificed beasts.

Still largely untouched by modernity, the Apatani tribe’s unique practices also include wet paddy cultivation (where the paddy is grown in fields half-submerged in water) and rearing fish in the period after the paddy is harvested. The Apatani plateau in Ziro, where its namesake tribes live, has also been proposed for inclusion as a World Heritage Site for its agricultural practices that don’t make use of animals or machines.

The next day, I wake up to mist swimming through the far reaches of Ziro Valley. We are put up at Hanyo Duyu and his wife Puming’s homestay, and Puming’s fluffy furball of a puppy, called Nappy, tugs at her leash, excited to see strangers. Despite witnessing last night’s gory ritual (details of which have been edited out for easier reading!), I had, surprisingly, slept without any nightmares. As I slowly come out of my sleepy daze, I hear some strange noises carried over by the breeze. Clearly, something is afoot next door. 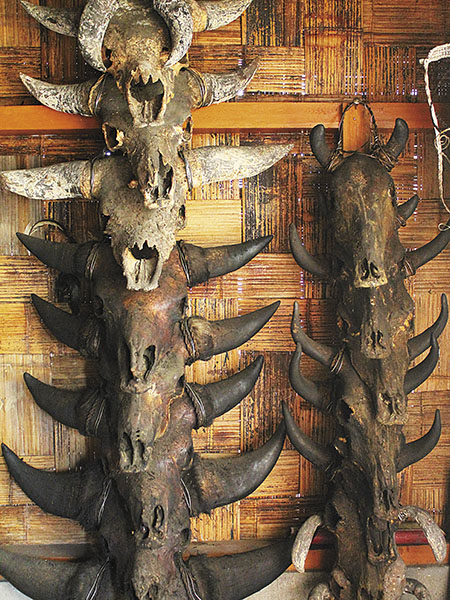 The Apatanis are hunter-gatherers and hunting memorabilia, including mounted heads of bisons, cows and deers, adorn many of their homes
Image: Prathap Nair
Curious, I walk down the bamboo-fenced street and arrive at a gathering of women with wrinkle-creased faces and enormous copper-coloured ‘nose-plugs’. “Ae dua,” they greet me in unison in Apatani. In the backyard of the house, a shaman, not unlike the one I saw last night, sits squat-legged, rocking, as if in a trance. It is another ritual. Turns out, Puming’s neighbour had a bad dream last night. Considered ominous, another sacrifice ritual is now underway to appease the tribal gods.

The Apatanis were first captured on camera in 1897 by the colonial officer Captain RB McCabe who arrived in the valley to investigate skirmishes between the Apatani and Nyishi tribes under what was then a British territory. The officer’s journals note of murders between different tribes in the surrounding hills sparked by women and animals—like the mithun, a type of domesticated yak—being kidnapped and stolen. One popular rationale regarding the nose-plugs of Apatani women is that the women are intentionally disfigured to render them unattractive, thus preventing them from being kidnapped by enemy tribes.

The government’s restrictive policies on movement in the Northeast, thanks to skittish neighbour China, have ensured minimal tourism and external influences in the valley. Progress has, however, arrived in the form of digital communication devices, television and automobiles. Though the Ziro music festival draws performers and travellers in plenty in September each year, travelling in Arunachal is still restricted and mostly draws travellers who have a taste for adventure. The lesser known Myoko festival attracts almost no domestic tourists, but there are a few foreign tourists interested in photographing the animist rituals.

Celebrated among the Diibo-Hija, Hari-Bulla and Hong village communities each year, Myoko is a meet-and-greet friendship festival where the rituals include slaughtering of animals, drinking apong, making merry and reading predictions for the ensuing year using egg yolks. For Myoko, each house erects a contraption of freshly-cut green bamboo decorated with bamboo leaves, egg shells and shaved bamboo sticks forming a frilly pattern. A dangerous rope-walking game, called Boha Bedu, used to be a part of the festivities until the Apatani Youth Association stopped the practice in 1972.

After the morning’s rituals, Hanyo and Puming’s cousin, the SUV-driving, gun-wielding Duyu Tayo, offers to take me for a walk in the nearby jungle. Wild cherry blossom, called semo in the local Apatani language, in an angry pink, stands out in the otherwise green jungle. After a short hike peppered with talk on boar hunting and the proliferation of homestays to cater to the rise in tourists, we return to the village. No friendship in Ziro seems to be complete without an invitation to visit a person’s home and as if to uphold the tradition, Tayo invites me in. Tayo’s bamboo house is filled with hunting memorabilia. Mounted heads of bison, cow, deer and even a great Indian hornbill line the walls of his house. Apatanis practise agriculture, but are also hunter-gatherers and old habits die hard. Though regulations have been imposed on hunting, a greater worry is that there isn’t a lot to hunt these days.

That evening, after having eaten rice and stir-fried greens, coupled with chunks of glistening pork, for two days in a row, my tongue craves familiar flavours and, seeking respite, I offer to cook. I am quite kicked about introducing my flavours to Puming and her family and decide to make the Kerala delicacy of erissery—pumpkin cooked with dal and coconut. While I chop pumpkin and grate coconut for the meal, the men rag me. “Pumpkin? That’s what our pigs eat,” says one guest, nursing his brew in his bony hands. “While the girls watch, a man cooks,” teases another. In the end, I fail to bowl them over with my erissery. 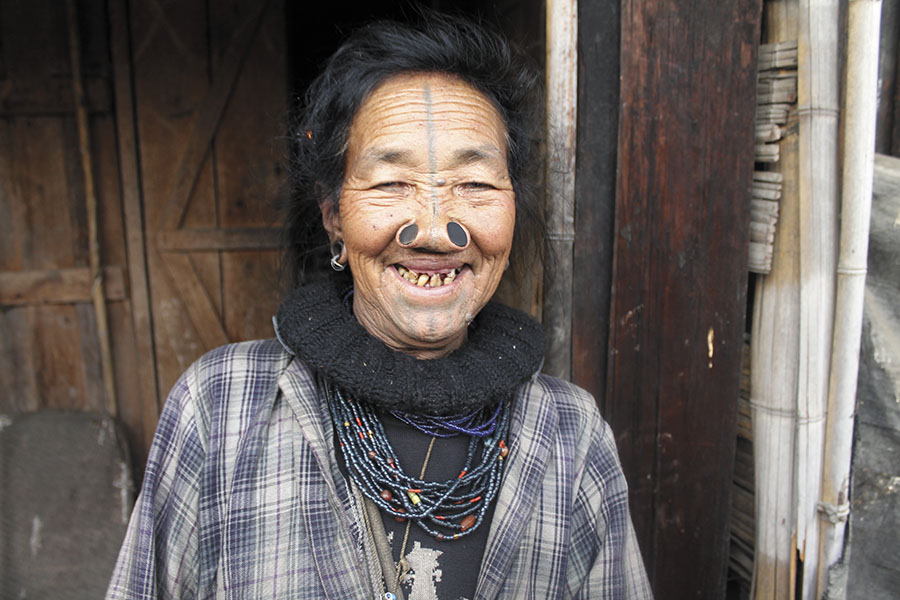 Nose plugs and facial tattoos stand out on the faces of most elderly Apatani women
Image: Prathap Nair
As the day of my departure approaches, the sacrifices I have witnessed, including the main ritual called Supung, weigh on my mind. More than the blossoming peach trees that line the streets or the gentle slopes that encircle Ziro valley or the unfettering hospitality of the locals, the hapless screams of animals form the backdrop to my trip in Ziro.

Just before I leave, I ask Hanyo about the sacrifices. Hanyo admits they eat most animals. “Monkeys, mithun, pigs, monitor lizards,” he says. The Apatanis do not waste any organ of the animal that’s sacrificed. Each part of the animal is incorporated into their meals—cured, pressure-cooked, minced.

“So, if a shaman instructs you, at some point, would you even sacrifice Nappy?” I ask him. “Yes, I would,” he says,” without batting an eyelid as I look on, astonished. I have the feeling that he’s revelling in my disgusted surprise, looking at me as a weak-hearted city dweller easily scandalised. Meanwhile, in the backyard, Nappy perhaps realising that we are leaving, tugs at her leash and wags her tail, expecting attention. As I make my way out, I say a little prayer for the furball to not end up in Hanyo’s dinner one day.

Tweets by @forbesindia
Bloodlines and business
Print and TV still dominate advertising in India, but digital is fast catching up