In India, family businesses are often a proxy for Indian entrepreneurship. For decades and more, Indian business families have dominated the country’s economic landscape, with several becoming case studies of how Indian enterprise has been able to grow, face adversities and adapt to changing domestic and global conditions. A number of families also have a deep-rooted culture of giving back to society. A celebration of Indian enterprise is, therefore, much about celebrating the successes and resilience of these family businesses. 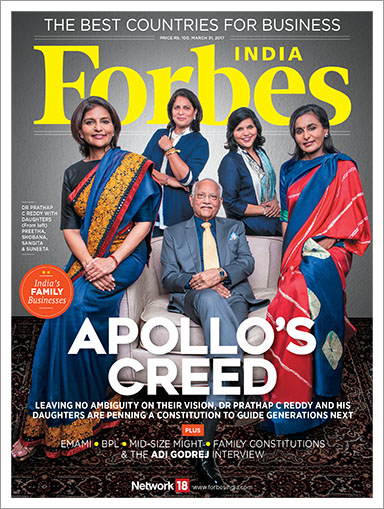 The 2016 PwC India Family Business Survey, the latest such exercise conducted by the consulting major, has come up with some significant findings. It shows that as many as 75 percent of family businesses in India have grown in the preceding 12 months, with an overwhelming majority—84 percent —optimistic about their growth and expecting to grow either steadily or quickly and aggressively over the next five years. This optimism, PwC says, is due to two key factors: The fact that family businesses tend to be resilient and stable during adverse conditions, and also because the India growth story has been reinforced of late. The survey says about half the respondents said they would look at expanding into new territories and sectors, and also consider inorganic growth. Among other takeaways was this: As many as 85 percent of family businesses said they had a mechanism to deal with conflict. However, only 15 percent had a robust, documented and communicated succession plan in place.

Forbes India’s maiden special issue on India’s Family Businesses, then, comes at a time when such businesses are in the midst of an interesting change. As the PwC survey also finds, business families are now beginning to actively involve the next generation, even as there are clear moves to professionalise the managements. Only one-third of businesses are keen to fully pass on the mantle to the next generation, while half of the families want to pass on ownership of shares to Generation Next even as they bring in professional managers to run the show.

These are vital signs of a big shift in the way Indian family businesses think. As you will see in this special issue helmed by Assistant Editor Anshul Dhamija, the resilience of business families is also clearly mixed with a need to adapt, change and look ahead— both in terms of a generational shift and the desire to grow and take the businesses forward. Whether it is Apollo Hospitals of Dr Prathap C Reddy where his four daughters are now aggressively involved in growing the business, or Emami, where the families of two close friends RS Agarwal and RS Goenka are harmoniously working together and taking the group to the next level, India has an eclectic mix of family business models. Beyond the big groups, exciting developments are taking place even in mid-size family businesses, with firms like Kalyan Jewellers and Baidyanath being good examples.

If the Forbes India Rich List is anything to go by, Indian family businesses are powering the country’s economic landscape. This is a trend which can only get stronger as such businesses recognise the value of changing with the times.