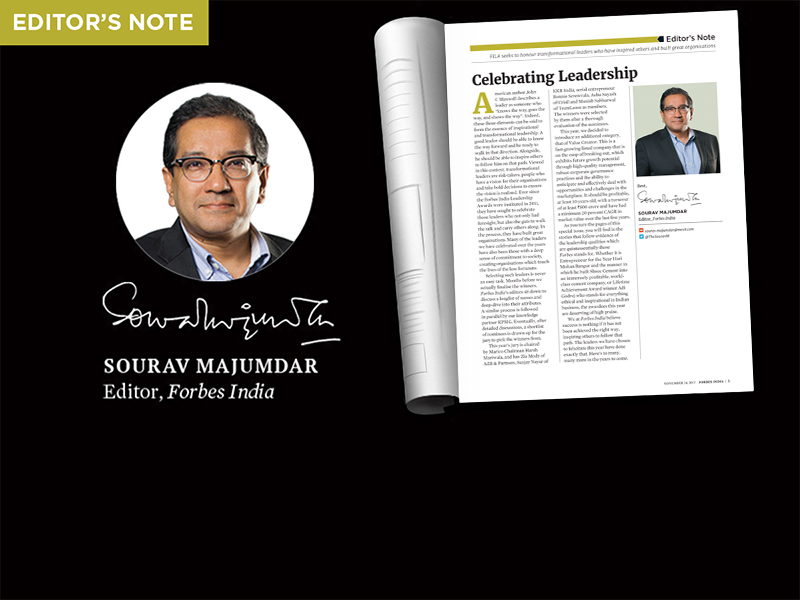 American author John C Maxwell describes a leader as someone who “knows the way, goes the way, and shows the way”. Indeed, these three elements can be said to form the essence of inspirational and transformational leadership. A good leader should be able to know the way forward and be ready to walk in that direction. Alongside, he should be able to inspire others to follow him on that path. Viewed in this context, transformational leaders are risk-takers, people who have a vision for their organisations and take bold decisions to ensure the vision is realised. Ever since the Forbes India Leadership Awards were instituted in 2011, they have sought to celebrate those leaders who not only had foresight, but also the guts to walk the talk and carry others along. In the process, they have built great organisations. Many of the leaders we have celebrated over the years have also been those with a deep sense of commitment to society, creating organisations which touch the lives of the less fortunate.

Selecting such leaders is never an easy task. Months before we actually finalise the winners, Forbes India’s editors sit down to discuss a longlist of names and deep-dive into their attributes. A similar process is followed in parallel by our knowledge partner KPMG. Eventually, after detailed discussions, a shortlist of nominees is drawn up for the jury to pick the winners from.

This year’s jury is chaired by Marico Chairman Harsh Mariwala, and has Zia Mody of AZB & Partners, Sanjay Nayar of KKR India, serial entrepreneur Ronnie Screwvala, Ashu Suyash of Crisil and Manish Sabharwal of TeamLease as members. The winners were selected by them after a thorough evaluation of the nominees. 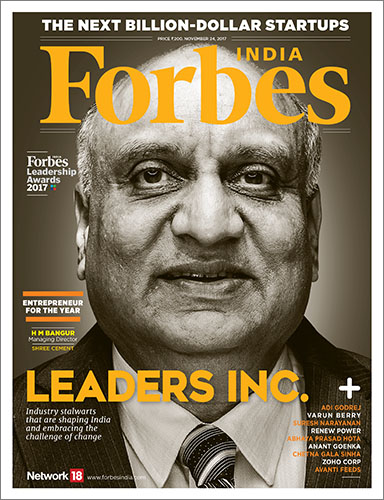 This year, we decided to introduce an additional category, that of Value Creator. This is a fast-growing listed company that is on the cusp of breaking out, which exhibits future growth potential through high-quality management, robust corporate governance practices and the ability to anticipate and effectively deal with opportunities and challenges in the marketplace. It should be profitable, at least 10 years old, with a turnover of at least ₹500 crore and have had a minimum 20 percent CAGR in market value over the last five years.

As you turn the pages of this special issue, you will find in the stories that follow evidence of the leadership qualities which are quintessentially those Forbes stands for. Whether it is Entrepreneur for the Year Hari Mohan Bangur and the manner in which he built Shree Cement into an immensely profitable, world-class cement company, or Lifetime Achievement Award winner Adi Godrej who stands for everything ethical and inspirational in Indian business, the awardees this year are deserving of high praise.

We at Forbes India believe success is nothing if it has not been achieved the right way, inspiring others to follow that path. The leaders we have chosen to felicitate this year have done exactly that. Here’s to many,  many more in the years to come.
Forbes India