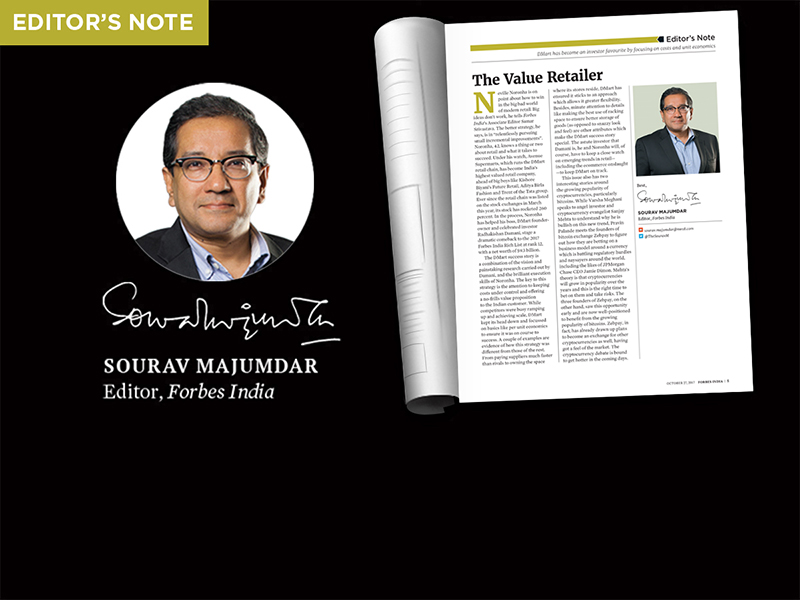 Neville Noronha is on point about how to win in the big bad world of modern retail. Big ideas don’t work, he tells Forbes India’s Associate Editor Samar Srivastava. The better strategy, he says, is in “relentlessly pursuing small incremental improvements”. Noronha, 42, knows a thing or two about retail and what it takes to succeed. Under his watch, Avenue Supermarts, which runs the DMart retail chain, has become India’s highest valued retail company, ahead of big boys like Kishore Biyani’s Future Retail, Aditya Birla Fashion and Trent of the Tata group. Ever since the retail chain was listed on the stock exchanges in March this year, its stock has rocketed 260 percent. In the process, Noronha has helped his boss, DMart founder-owner and celebrated investor Radhakishan Damani, stage a dramatic comeback to the 2017 Forbes India Rich List at rank 12, with a net worth of $9.3 billion. 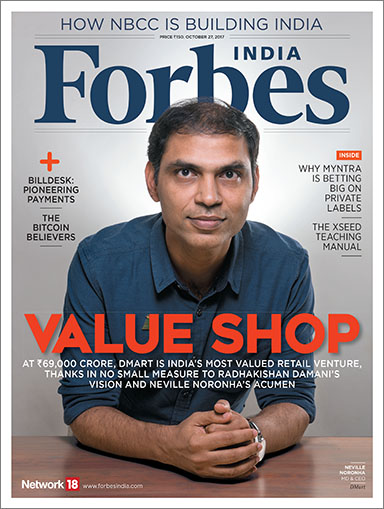 The DMart success story is a combination of the vision and painstaking research carried out by Damani, and the brilliant execution skills of Noronha. The key to this strategy is the attention to keeping costs under control and offering a no-frills value proposition to the Indian customer. While competitors were busy ramping up and achieving scale, DMart kept its head down and focussed on basics like per unit economics to ensure it was on course to success. A couple of examples are evidence of how this strategy was different from those of the rest. From paying suppliers much faster than rivals to owning the space where its stores reside, DMart has ensured it sticks to an approach which allows it greater flexibility. Besides, minute attention to details like making the best use of racking space to ensure better storage of goods (as opposed to snazzy look and feel) are other attributes which make the DMart success story special. The astute investor that Damani is, he and Noronha will, of course, have to keep a close watch on emerging trends in retail—including the ecommerce onslaught —to keep DMart on track.

This issue also has two interesting stories around the growing popularity of cryptocurrencies, particularly bitcoins. While Varsha Meghani speaks to angel investor and cryptocurrency evangelist Sanjay Mehta to understand why he is bullish on this new trend, Pravin Palande meets the founders of bitcoin exchange Zebpay to figure out how they are betting on a business model around a currency which is battling regulatory hurdles and naysayers around the world, including the likes of JPMorgan Chase CEO Jamie Dimon. Mehta’s theory is that cryptocurrencies will grow in popularity over the years and this is the right time to bet on them and take risks. The three founders of Zebpay, on the other hand, saw this opportunity early and are now well-positioned to benefit from the growing popularity of bitcoins. Zebpay, in fact, has already drawn up plans to become an exchange for other cryptocurrencies as well, having got a feel of the market. The cryptocurrency debate is bound to get hotter in the coming days.

Tweets by @forbesindia
Indian IT companies expected to post strong results, push ahead with cloud shift rest of the year
Podcast: DMart - The value shop