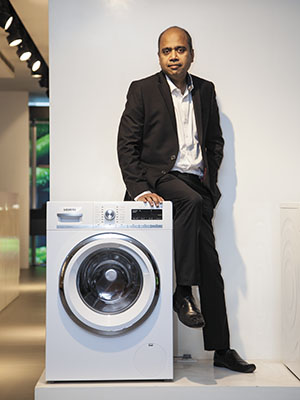 Name: Gunjan Srivastava
Age: 47 years
Designation: MD and CEO, Bosch Siemens Home Appliances Manufacturing Pvt Ltd (India)
Education: IIT (BHU), IIM-Ahmedabad
The challenge: BSH was a marginal player in washing machines. The company needed to differentiate itself in a cluttered market
How they did it: By going against the prevailing wisdom and launching a 7 kg, front load washing machine in a market dominated by 6 kg machines
Next move: To launch refrigerators for the Indian market

Bosch Siemens Home Appliances (BSH) entered India in 2010 as a wholly-owned subsidiary of the German home appliances manufacturer BSH Hausgeräte GmBH. Prior to that, Bosch Siemens products were sold through a distributor. As part of our company’s dual-brand strategy, we decided to position Siemens as a premium brand while Bosch would be the more affordable one. We launched Bosch washing machines in India in 2011, a year after setting up our offices in the country. At that time, all our machines were imported. After some initial success, we decided by late 2011 that we would manufacture washing machines in India and preparations for that began at our plant in Chennai. Clearly, if we were going to be a big player, we could not rely on imported machines designed for other markets.

Between 2011 and 2013, we sold our imported range and also learnt a fair bit about what Indian consumers wanted. Our research was both quantitative and qualitative. Washing machines were placed in households and customer behaviour was studied. People wanted shorter wash cycles, faster drying, lower power consumption and lesser use of water. In addition, a lot of customers told us they wanted a feature where they could add more clothes mid-cycle. We assimilated this information and worked on making a machine that would, to a large extent, incorporate these needs. There were also some specific needs regarding wash cycles for dhotis and saris, which we incorporated.

On the quantitative side, through the use of scorecards, we studied the performance of machines. All this became an input for the product we designed for India.

We knew from the beginning that our imported products would be good for the urban consumer, but if we wanted to tap into the top 200 cities in India, we would need to make changes to our foreign models. I’ll share two examples. Voltage fluctuations are common in India and we could have sold the product with an external stabiliser, but we realised that the consumer wouldn’t accept this. So we incorporated an internal stabiliser (this is a modification that most multinational home appliance companies have made for the Indian market). Second, clothes don’t dry easily in the monsoon. That is when consumers feel the need for a powerful dryer. We ensured the machine we built in our Chennai factory had high drying efficiency.

Our next challenge was to decide what product segment to enter. When it comes to front load washing machines, the market is dominated by 6 kg machines. But our market research showed that in India, a 7 kg product would be more efficient as Indians tend to have large joint families. The average family size is 4-5 members and in a 7 kg drum, if you load 6 kg of clothes, the washing efficiency is better.

Prior to our launch, the 6 kg machines had a market share of 85 percent while the 7 kg version accounted for around 15 percent. Still, we stood by our research and entered the market with a 7 kg, front load product. Since the launch in September 2014, the market size for 7 kg machines has risen to 25 percent, according to a research by Gfk Nielsen. Everyone had a 7 kg product, but no one wanted to move in that direction. When the consumer went to shop, he saw our 7 kg product and took to it as it was our best one.

While the 7 kg machine is our mainstay, we also have a 6 kg product that is imported. That was done mainly to grant us entry into small-town retailers who are reluctant to stock only 7 kg products as the market is dominated by 6 kg machines.

Even as we brought in more flexibility for the consumer, we were careful not be priced out of the market. While the competition’s 6 kg product comes with a price tag of Rs 26,000-27,000, our 7 kg machines are priced at Rs 30,000. This makes it attractive for people to stretch a bit and upgrade. The price should not be a barrier.

Bosch Siemens has also expanded its presence in India. While the market for front load machines is in the top 200 cities in the country, we were not present in all of them initially. But with two brands and a ‘Made for India’ product, we were able to convince more retailers to stock our products.

The dual-brand strategy continues to help us in many ways. Due to our legacy in India, there are different parts of the country where the Bosch brand and Siemens brand are strong. For instance, Siemens is strong in Mumbai and the surrounding region, whereas Bosch is strong in Hyderabad and Bengaluru.

What we have done in India is to deliver German engineering suited for Indian conditions and that is the promise the consumer is buying into. We hope to be the second biggest washing machine company in India in the next 18 months, which would be an improvement from our number three status now. In some markets, like parts of the South, we are already second, behind our Korean rivals LG and Samsung. (BSH does not publish its revenues by country.)

Going forward, we plan to adopt the same strategy for refrigerators with a ‘Made for India’ range next year.