Bank of England struggles to calm markets after latest intervention

This week's actions are a fresh bid to soothe the bond markets in particular, as state borrowing—and its costs—soar following UK finance minister Kwasi Kwarteng's debt-fuelled mini-budget last month. The poor market response to it saw UK bond yields spike and the pound tumble to a record low against the dollar, prompting the BoE to step in over recent weeks vowing to protect the nation's financial stability 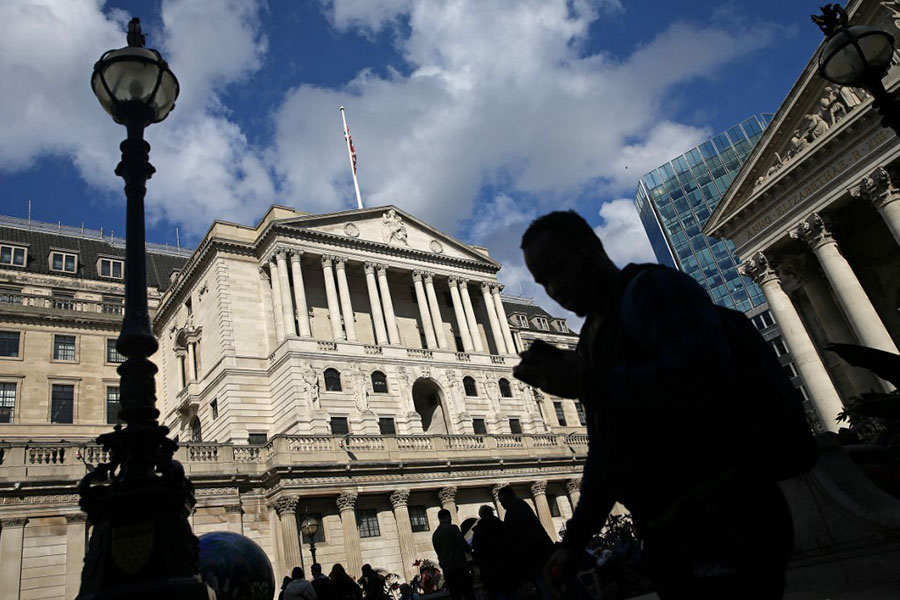 In this file photo taken on September 29, 2022 people walk past The Bank of England in central London. The Bank of England on October 11, 2022 unveiled yet more measures aimed at calming markets rocked by a UK budget as it warned over risks to the nation's financial stability. Image: ISABEL INFANTES / AFP

The Bank of England struggled Tuesday to reassure investors after unveiling yet more measures to calm markets rocked by the British government's tax-cutting mini-budget, as the International Monetary Fund renewed warnings about their divergent policies.
The day after it launched a temporary facility aimed at easing liquidity pressures, the central bank said it was now widening the scope of its daily purchases of UK government bonds, or gilts, until Friday to include index-linked securities.
Comprising around a third of such bonds, they see their value and interest rates fluctuate with UK inflation and can have an outsized impact on pension funds which invest heavily in government bonds.

This week's actions are a fresh bid to soothe the bond markets in particular, as state borrowing—and its costs—soar following finance minister Kwasi Kwarteng's debt-fuelled mini-budget last month.
The poor market response to it saw UK bond yields spike and the pound tumble to a record low against the dollar, prompting the BoE to step in over recent weeks vowing to protect the nation's financial stability.
In a surprise September 28 move, it announced it was temporarily buying up tens of billions of pounds of long-dated UK government bonds "to restore orderly market conditions".
Its latest action Tuesday would "act as a further backstop to restore orderly market conditions", the central bank said.

It noted that "the beginning of this week has seen a further significant repricing of UK government debt, particularly index-linked gilts", which it will now buy under its wider operation of bond purchases.
"Dysfunction in this market, and the prospect of self-reinforcing 'fire sale' dynamics pose a material risk to UK financial stability," it added.
But in a sign that investors remained wary of the UK's ability to repay long-term debts, the 30-year government borrowing rates have risen again in recent weeks and reached 4.73 percent early Tuesday afternoon.
Also read: Fitch lowers outlook for UK rating from 'stable' to 'negative'
AJ Bell investment director Russ Mould noted a key problem was that "the support measures are only scheduled to last until Friday".
"Extending it could go one of two ways—the market either applauds the move and breathes a sigh of relief or it gets even more worried, thinking the extra time suggests the crisis is more severe than originally thought."
In some positive news, official data Tuesday revealed British unemployment fell to a near 50-year low at 3.5 percent.
Wages, however, continue to be eroded by decades-high inflation that threatens to send Britain into recession.
The British government on Monday brought forward key growth and inflation forecasts to Halloween, hoping not to spook markets further.
Finance minister Kwarteng will unveil debt-reduction plans and UK economic predictions on October 31 rather than in late November.
It comes after he was already forced to axe a tax cut for the richest earners, in the face of outrage as millions of Britons face a cost-of-living crisis with UK inflation around 10 percent.

However, in Washington, IMF economic counsellor Pierre-Olivier Gourinchas said the divergence between BoE monetary policy and the UK government's tax-slashing fiscal plans was "a little bit difficult".
"It's like having a car with two people in the front, and each of them is steering the wheel, and trying to steer the car in a different direction," he told reporters. "That's not going to work very well."
The IMF, among others, has previously criticised the mini-budget over fears that government debt would balloon to pay for the tax cuts.
Also read: What's happening to UK's economy and how Bank of England is trying to manage it
It added to the gloom Tuesday with a new forecast that UK economic growth would slow sharply to just 0.3 percent in 2023—and warned the budget would "complicate" efforts to fight inflation.
Fitch last week lowered the outlook on its credit rating for British government debt to negative from stable.
The BoE has piled on further pressure by ramping up its main interest rate to a 14-year high of 2.25 percent in a bid to cool inflation—and is expected to hike even further next month.
This in turn has seen retail banks ramp up interest rates on mortgages, with analysts predicting heavy price falls for property.
Britain meanwhile faces "painful" cuts in public spending to fix state finances should it decide against more U-turns over tax cuts, a leading think tank warned.
"With a weaker economy, getting government finances on a sustainable path without cancelling tax cuts could force... big and painful spending cuts," the Institute for Fiscal Studies said in a study.
By Ben PERRY
© Agence France-Presse​

Tweets by @forbesindia
Photo of the day: 12 years in the making
Despite inflation, literature lovers don't plan to cut down on book purchases