Two years ago, the future of independent bookselling looked bleak. Coronavirus forced retailers to shut down and the publishing industry was braced for a blow that could permanently reshape how readers buy books. Instead, something unexpected has happened

By Alexandra Alter and Elizabeth A. Harris 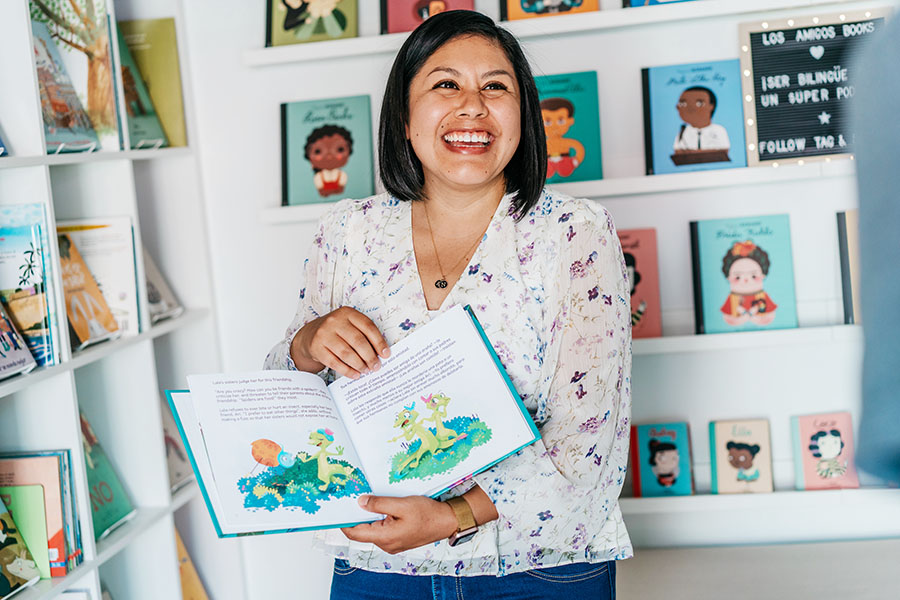 Laura Rodríguez-Romaní, a former dual language elementary school teacher in her Los Amigos Books, which specializes in English and Spanish language children’s books, at the Berwyn Shops retail incubator in Berwyn, Ill., June 30, 2022. More than 300 new independent bookstores that have sprouted across the U.S. in the past couple of years, in a surprising and welcome revival after an early pandemic slump. (Jamie Kelter Davis/The New York Times)

People told Lucy Yu it was a crazy time to open a bookstore in New York City’s Chinatown. It was early 2021, and the pandemic had devastated the neighborhood, forcing dozens of stores and restaurants to close. The rise of anti-Asian hate crimes had shaken residents and local business owners.

But Yu believed that a bookstore was just what the neighborhood needed.

She raised around $20,000 on GoFundMe, enough to rent a narrow storefront — a former funeral supply store — on Mulberry Street in downtown Manhattan. A neighborhood grant gave her $2,000 for shelves and books. And in December, she opened Yu and Me Books, which specializes in titles by and about immigrants and people of color.

The store was profitable within four months, Yu said.

Yu and Me Books is one of more than 300 new independent bookstores that have sprouted across the United States in the past couple of years, in a surprising and welcome revival after an early pandemic slump. And as the number of stores has grown, the bookselling business — traditionally overwhelmingly white — has also become more much more diverse.

“People were hungry for a place focused on Asian American and immigrant stories,” said Yu, 27, who worked as a chemical engineer and supply-chain manager before opening the store. “That’s something I was always searching for when I went to bookstores, and I wanted people to come here and not have to search.”

Two years ago, the future of independent bookselling looked bleak. As the coronavirus forced retailers to shut down, hundreds of small booksellers around the United States seemed doomed. Bookstore sales fell nearly 30% in 2020, U.S. Census Bureau data showed. The publishing industry was braced for a blow to its retail ecosystem, one that could permanently reshape the way readers discover and buy books.

Instead, something unexpected happened: Small booksellers not only survived the pandemic, but many are thriving.

“It’s kind of shocking when you think about what dire straits the stores were in in 2020,” said Allison Hill, CEO of the American Booksellers Association, a trade organization for independent bookstores. “We saw a rally like we’ve never seen before.”

The association has 2,023 member stores in 2,561 locations, up from 1,689 in early July of 2020. Some of the growth reflects the renewal of memberships by existing stores that put off doing it last year amid the uncertainly caused by the pandemic. But there has also been a sharp and sustained rise in new bookshops, and more than 200 additional stores are preparing to open in the next year or two, Hill said.

Many stores have also seen a bump in profits. In a survey of booksellers earlier this year, the association found that about 80% of respondents said they saw higher sales in 2021 than in 2020, and nearly 70% said their sales last year were higher than 2019, Hill said.

At Blue Willow Bookshop in Houston, revenue was up by 20% in 2021, and the store made more money last year than it did in 2019, according to the owner, Valerie Koehler. Mitchell Kaplan, founder of Books & Books, an independent chain in South Florida, said sales were up more than 60% in 2021 compared with 2020.

Many of the new stores that opened during the pandemic are run by nonwhite booksellers, among them The Salt Eaters Bookshop in Inglewood, California, which specializes in books by and about Black women, girls and nonbinary people; the Libros Bookmobile, a Latina-owned mobile bookstore in a converted school bus in Taylor, Texas, which stocks fiction in Spanish and English, and Reader’s Block, a Black-owned bookshop in Stratford, Connecticut.

The rapid growth of physical bookshops is especially surprising at a time when brick-and-mortar stores face crushing competition from Amazon and other online retailers. Many bookstore owners are also confronting new uncertainty from a grim outlook for the overall economy — labor shortages, supply-chain snafus, rising rents and interest rates, higher costs of goods, and a looming recession that could drive down consumer spending.

But one unexpected outcome of the pandemic was the way many communities rallied around their local bookstores in a time of crisis. When in-person shopping plummeted during the shutdown, bookstores rapidly scaled up their online sales operations and found other ways to keep their customers, including curbside pickup, home delivery, outdoor pop-up stores and bookmobiles. Readers, it turned out, were eager for print books during the pandemic, and the spike in sales continued into 2021, when publishers sold nearly 827 million print books, an increase of roughly 10% over 2020, according to NPD BookScan.

On a recent afternoon in Chinatown, a steady stream of shoppers browsed and chatted with Yu at her shop, which carries some 2,000 titles and sits on a stretch of Mulberry Street near a funeral home, a dumpling shop and a dry cleaner. In the back of the store, customers settled into a cozy reading nook.

“I’ve seen some dates going down in there,” Yu said. “Good ones. Bad ones.”

One shopper asked Yu if she could recommend a cookbook for a housewarming present; Yu handed her a stack of options. Another customer, author Ava Chin, who works in a writing studio in the neighborhood, stopped by to see if a book she had ordered had arrived. Yu found it — “Wayward Lives, Beautiful Experiments,” by Saidiya Hartman.

Chin, whose family has lived in Chinatown for generations, said that the store has become a gathering spot for artistic and literary-minded locals, and something of an Asian American literary hub. Its packed calendar includes a bilingual poetry reading with poet Yam Gong, a book launch for writer and essayist Larissa Pham and a signing with novelist Marie Myung-Ok Lee.

At a moment when anti-Asian hate crimes have surged, the store has also come to feel like a safe haven, Chin said. In March, the shop held an event to raise awareness and distributed more than 1,000 safety alarms and pepper spray canisters.

“It’s not just a bookstore; it really is a de facto community space,” Chin said. “I don’t think we realized we needed a bookstore until we had one.”

Tweets by @forbesindia
3 out of 4 Indian fliers are concerned about flight safety: Survey
K-pop girl band Blackpink is on its way to world domination