Elon Musk Vs Twitter: How the bots will decide the fate of legal tussle 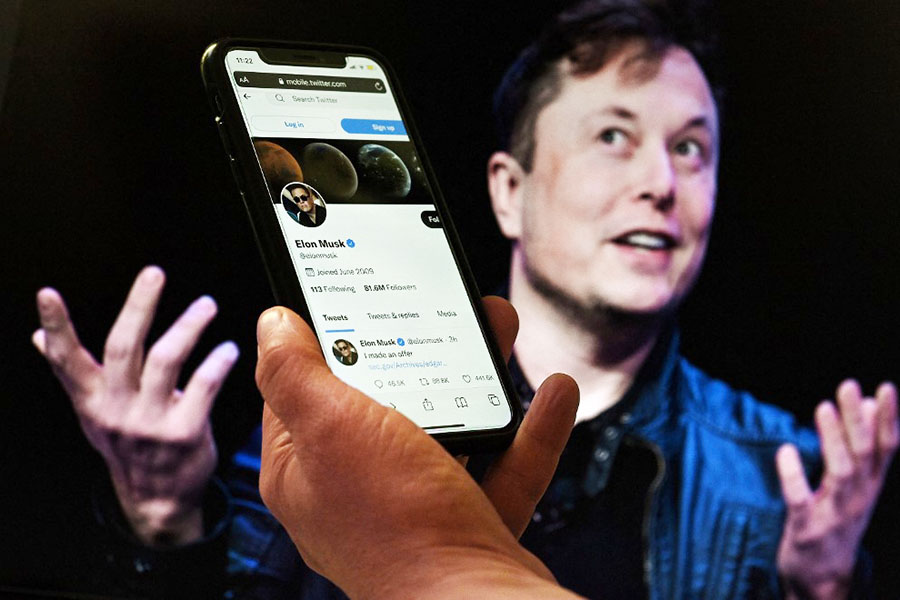 Here's a closer look at the complications around bot accounts, and how they would be key in deciding the case. Image: Olivier DOULIERY / AFP

If Twitter's lawsuit over Elon Musk's $44 billion buyout bid ever reaches trial, the case will likely centre on a ubiquitous and often unloved technology: bots. The information Twitter has or has not provided on its tally of fake or spam accounts is Musk's stated reason for backing away from the deal—a move that prompted the firm to sue him this week.
Here's a closer look at the complications around bot accounts, and how they would be key in deciding the case.

At a basic level, "bots" are software programs that do automated tasks online, often with the aim of emulating how people behave.
Twitter tolerates some automated uses, like an account that tweets every time the Hubble space telescope crosses the sky over a given city.

But Twitter has rules about automated actions by accounts, including barring software from posting about hot topics, firing off spam, attempting to influence online conversations, and operating across multiple accounts.
The company says it wages a daily campaign against spam or fake accounts that keeps their number to less than five percent of users.
Musk's lawyers, in notifying Twitter on July 8 he was "terminating" the agreement to buy the company, alleged the platform made "false and misleading representations" about bots and had not provided details he needed to check its assertions.

Determining the number of bots on the site is a bit of an art because the tally is determined in part by Twitter's internal definitions and the workers who apply the rules.
While some cases are clear cut violations, some can require the judgement of people who have to weigh various facts.Also read: Twitter lawsuit accuses Elon Musk of contract breach
"People can disagree on what should be considered a bot or a spam account," said Edwin Chen, a former Twitter employee, who is now CEO of content moderation firm Surge AI.
The figure would also be tricky for an outsider like Musk to confirm because the bot weeding process can include checking IP or email address or other sensitive user data.
"I think a lot of people, not even just my former colleagues but people just generally within the tech industry, know that this is a thorny, thorny question," Chen added.
Twitter's lawsuit, which urges a court to force Musk to honor his buyout offer, could result in a trial or settlement talks that would need to plunge into the finer points of things like the firm's bot definitions and policies.
Musk's lawyers said he has already asked for but had not received "Twitter's methodology and performance data" about finding and suspending spam and fake accounts.
"In short, Twitter has not provided information that Mr. Musk has requested for nearly two months," the lawyers wrote in laying out the argument for aiming to abandon the deal.

Speculation has mounted that the bot issue—with its tricky, detailed and case-by-case aspects—is just a convenient route for Musk to abandon or renegotiate his proposal.
Yet, bots are a problem online.Also read: Twitter stares at uncertain future as it faces messy breakup with Musk
"Bad actors have nearly infinite resources and incentives to use bots for nefarious purposes," said Tamer Hassan, co-founder and chief of cybersecurity firm HUMAN.
Bots are used in more than three quarters of security and fraud incidents that happen online, from spreading socially divisive posts to snapping up hot concert tickets and hacking, Hassan told AFP.
Also, Twitter makes its money from ads, and marketers pay for reaching people, not software.
Thus "advertising to bots isn't going to have a good close rate because bots don't buy products," analyst Rob Enderle told AFP previously.
If advertisers are paying Twitter fees based on how many people see ads, and those numbers are inflated due to bots in the online audience, they are being overcharged, Enderle added.Also read: US hits Twitter with $150 million fine over privacy breach
If Twitter has way more bots than it is letting on, its revenue could plunge when those accounts are exposed and closed.
Or as Musk's lawyers put it, Twitter's true daily users who can be shown advertising are "a key component of the company's business, given that approximately 90 percent of its revenues come from advertisements."

Tweets by @forbesindia
How Nomura is building its India business
Saudi Arabia-US: From protection for oil to Khashoggi murder, a crisis-peppered partnership