Saudi Arabia-US: From protection for oil to Khashoggi murder, a crisis-peppered partnership

Saudi Arabia and the United States have a long-standing strategic partnership, but the oil and security driven relationship has been strained by several crises. Here's a look at the complicated relationship 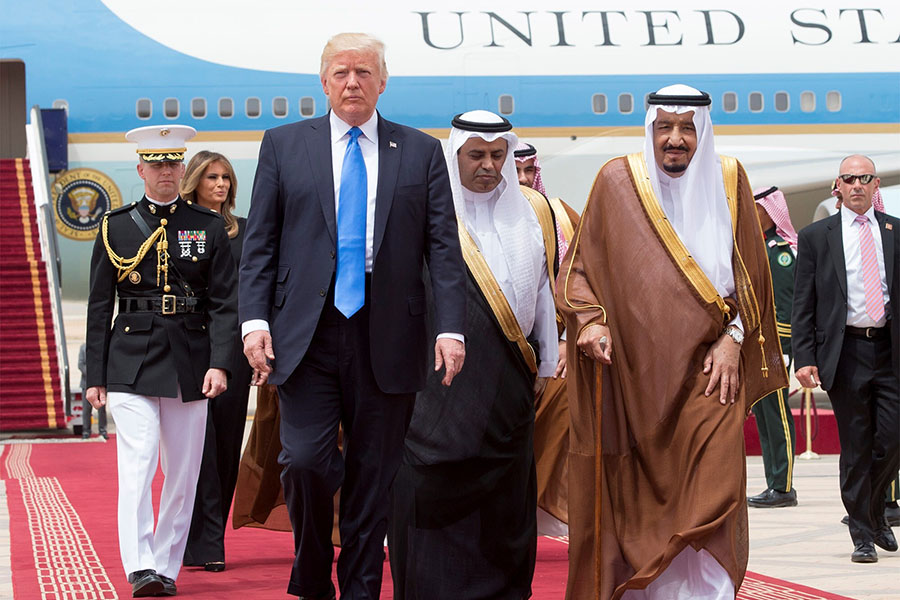 Saudi Arabia and the United States have a long-standing strategic partnership, but the oil and security driven relationship has been strained by several crises.
The biggest such crisis in recent years has been the gruesome murder of dissident journalist Jamal Khashoggi—an event that casts a shadow over US President Joe Biden's looming visit to the kingdom.

On February 14, 1945, the two countries' partnership is sealed during a historic meeting between king Abdel Aziz bin Saud and President Franklin D Roosevelt on board the cruiser USS Quincy in the Suez Canal.
The agreement sees the US guarantee military protection for the kingdom in return for privileged access to oil reserves, which were discovered in enormous quantities in the 1930s.

Oil as a weapon

In October 1973, 10 days into the Israeli-Arab war, Riyadh and fellow Arab members of the OPEC (Organization of the Petroleum Exporting Countries) cartel use oil as a diplomatic weapon. Also read: Nukes, oil and a prince's redemption: A trip fraught with perils for Biden
They increase prices by 70 percent and impose an oil embargo on countries backing Israel, including the United States.

After Iraqi dictator Saddam Hussein's August 1990 invasion of Kuwait, Riyadh allows hundreds of thousands of US troops to deploy in the kingdom.
The country serves as a base for the US-led coalition during the 1991 Gulf War against Saddam.
Over the following years, the coalition continues to station planes in the kingdom to enforce a "no-fly zone" over southern Iraq, provoking the anger of Saudi Muslim fundamentalists who carry out two anti-US attacks on Saudi soil in the mid-1990s.

The September 11, 2001 attacks against the US represent a serious setback for bilateral relations—15 of the 19 plane hijackers are Saudi nationals.Also read: For a kingdom with an image problem, golf is seen as a sanitizer
Riyadh condemns the attacks, but is accused of quietly financing Islamic extremism.
Washington evacuates most of its remaining soldiers from Saudi Arabia and transfers them to Qatar.

Riyadh backs the Syrian uprising against President Bashar al-Assad and does not hide its anger after US president Barack Obama in September 2013 backs away from carrying out air strikes against the regime.
In October that year, Saudi Arabia refuses to take a seat at the UN Security Council, to protest against what it regards as US inaction over the Syrian crisis.
The 2015 nuclear agreement with rival regional power Iran—signed by the US and other world powers—further undermines Riyadh's confidence in the Obama administration.

Saudi leaders warmly welcome Donald Trump's arrival in office, and in May 2017 he is received with pomp for his first overseas presidential visit.
He calls for the isolation of Iran. The US and Saudi Arabia announce huge contracts exceeding $380 billion, including $110 billion for the sale of US arms to Riyadh.Also read: Behind the Russia-Saudi breakup, calculations and miscalculations
In October 2018, Khashoggi is killed and dismembered by Saudi agents in the kingdom's Istanbul consulate. But his murder does little to disturb relations with the White House under Trump.
The president vows in the aftermath to "remain a steadfast partner" of Saudi Arabia.

But in his successful campaign for the US presidency, Democrat Joe Biden describes the oil-rich kingdom as a pariah, in large part due to the Khashoggi murder.
In February 2021, a month after Biden takes office, US intelligence releases a report concluding that the powerful Crown Prince Mohammed bin Salman "approved an operation... to capture or kill" Khashoggi, something the crown prince denies.
The White House says Biden intends to reset relations with Riyadh and maintains contact with King Salman rather than the crown prince.
Biden also calls for an end to the war between the Saudi-backed Yemen government and Iran-affiliated Huthi rebels, scaling back support for a Saudi air campaign.

On June 12, 2022, the White House confirms that Biden will visit Saudi Arabia as part of a Middle East tour.
A US official also confirms that the president will meet with Crown Prince Mohamed.
Biden acknowledges in a July 9 op-ed that while "many... disagree" with his trip, his aim is "to strengthen a strategic partnership... based on mutual interests and responsibilities."
He is expected to press Riyadh to boost oil supplies to help tame elevated energy prices that have fed into US inflation hitting 40-year highs.
He is due to fly directly from Israel to the Saudi city of Jeddah on Friday, July 15.

Tweets by @forbesindia
Elon Musk Vs Twitter: How the bots will decide the fate of legal tussle
NFT platform OpenSea lays off 20% of its staff citing crypto winter