Most of the Florida homes in the path of Hurricane Ian lack flood insurance, posing a major challenge to rebuilding efforts, new data show 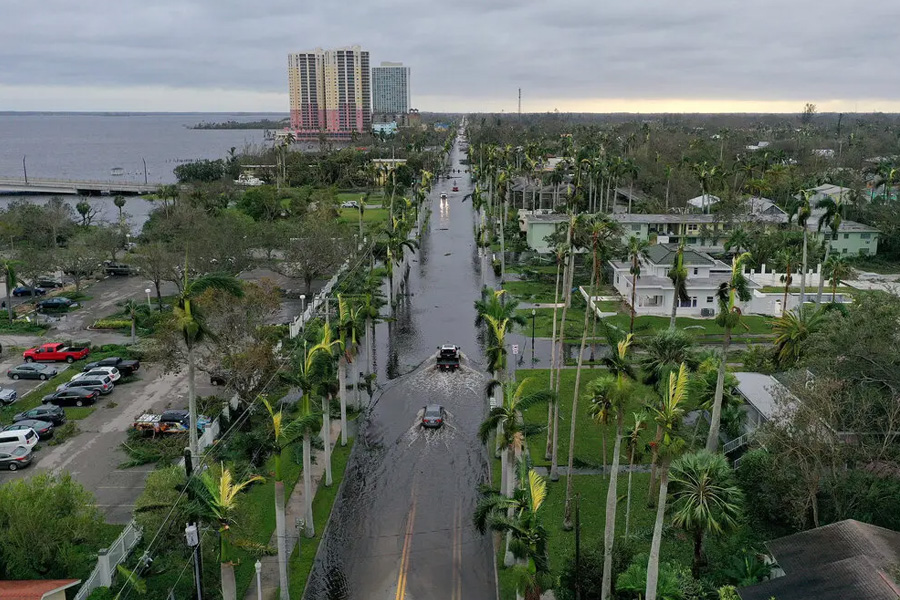 Within those counties, homes inside the government-designated flood plain, the area most exposed to flooding, 47.3% of homes have flood insurance, Milliman found

Most of the Florida homes in the path of Hurricane Ian lack flood insurance, posing a major challenge to rebuilding efforts, new data show.

In the counties whose residents were told to evacuate, just 18.5% of homes have coverage through the National Flood Insurance Program, according to Milliman, an actuarial firm that works with the program.

Within those counties, homes inside the government-designated flood plain, the area most exposed to flooding, 47.3% of homes have flood insurance, Milliman found. In areas outside the flood plain — many of which are still likely to have been damaged by rain or storm surge from Ian — only an estimated 9.4% of homes have flood coverage.

The small share of households with flood insurance demonstrates the challenges posed by the country’s approach to rebuilding after disasters — a mix of public and private funding that is under strain as climate change makes those disasters more frequent and severe.

If people can’t pay to rebuild their homes after disasters, the financial toll of climate change for households and communities could become ruinous.

Regular homeowners’ insurance policies typically don’t pay for damage caused by flooding, which is why the Federal Emergency Management Agency offers flood insurance. The coverage is expensive, with average premiums close to $1,000 a year, according to data from Forbes. But without it, homeowners hit by flooding are left to rely on either savings, loans or charity to rebuild.

The low takeup rates for federal flood insurance in the areas hit by Hurricane Ian mean it will take longer for those communities to rebuild, imperiling their economies and prolonging the suffering, experts said.

“These people, many of them believe that their homeowners’ insurance policy will cover them,” said Nancy Watkins, principal and consulting actuary at Milliman. “Or they might think that federal disaster aid is going to swoop in and make them whole.”

But federal disaster assistance is less generous than many people assume.

FEMA offers some limited emergency assistance to homeowners without insurance, such as paying for temporary housing in a hotel, motel or mobile home, or making basic repairs to make a house habitable.

But FEMA typically won’t pay to rebuild homes, as The New York Times reported in July. Aid is limited to less than $40,000 — a fraction of what it costs to rebuild.

Congress can decide to provide extra money for disaster survivors, usually by giving funding to the U.S. Department of Housing and Urban Development, which can then set up what it calls disaster recovery grants to states. States can then use that money to pay for rebuilding homes.

But Congress has no guidelines for determining which disasters merit that extra funding and whether it provides the funding depends as much on the political clout of a state’s congressional delegation as on the actual level of damage. Even when Congress makes extra money available, it often takes years before that funding reaches homeowners.

Disaster survivors who lack insurance, but who can’t wait years in the hope of aid, can apply for help from the Small Business Administration, another federal agency that plays a role in disaster recovery. The agency loans to renters, homeowners, businesses and nonprofit organizations. But those loans must be repaid — what amounts to a new mortgage, which can be challenging for disaster survivors.

The number of homeowners with flood insurance fell after a recent decision at FEMA that changed how prices for flood insurance are determined, according to Steve Bowen, the chief science officer at Gallagher Re, a reinsurance broker.

Also read: Did nature heal during the pandemic 'anthropause'?

Last fall, FEMA began setting the cost of flood insurance based on the specific risk facing each individual home. Before then, premiums were determined using more general information, such as whether a home was inside the flood plain.

The new pricing structure means that rates for high-risk homes now reflect something closer to the actual cost of the risk they face. FEMA made the change so that the insurance program would be more financially self-reliant, leaning less on taxpayer funding after big flood events.

The agency also hoped that more precise rates would communicate the threat to property, perhaps getting people to think twice about living in a dangerous area.

But the new pricing meant steep rate increases for some homes.

After the new prices took effect, the number of homes that have federal flood insurance coverage, which had already been inching downward, started to fall even faster, Bowen said.

Tweets by @forbesindia
Meta will freeze most hiring, Zuckerberg tells employees
Nobel 2022 prize season under shadow of war in Ukraine